When I think of my times shopping at the many retail stores of the past, I think of what we used to buy in such heavy quantities. Tupperware. Just this past weekend, it got me thinking. After glancing at a Tupperware tote currently cornered in our living room/kitchen space, that there was a crusty old sticker on it from when it was originally purchased. After getting down on all fours, which I did, I saw something. Visions. Clouds burst through the cloudy skies and a revelation came to. I had seen a “Caldor” sticker on the box. It never occurred to me that we have a bunch of those sky blue-colored plastic totes all over the house; basement, garage, and closet side.

While many of them are storage chambers for all the forgotten odds and ends from over the years, stickers from retail history is what was found on many of these “Roughneck” Tupperware totes. Price stickers right on the products; that’s just how they did things back in those days. Here’s a look at my findings just from doing a little scavaging upon awaiting my [last ditch effort thing to eat] third meal/frozen pizza in the oven just last night. 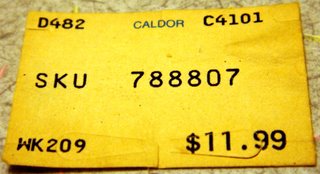 An unusual blue, basic-font “Caldor” logo most likely from the sometime-era 1990’s. There are a few of these around my house. 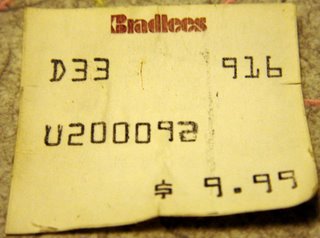 A sticker found on a tote purchased at Bradlees, the lower eschelon, darker-interior-than-Caldor alternative to Caldor. Possible “brown” logo impressed me, could also have been red at one point. 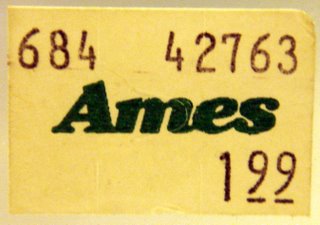 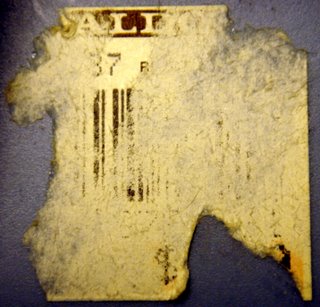 A very old “Caldor” logo which could be identified as 1970s~1980s era. This one was attempted at price tag phasing by it’s owner. These pesky adhesives are well known for ruining products.
The term "Label scar", of course, does not refer to printed adhesive price tags but are scars seen faintly on building left by former tenants. When looking for these, you might find pockmarks on buildings where signage is, discoloration, and in some cases, fully visible identification. Label scars are all about finding out store histories and is a term coined by Peter Blackbird of Dead Malls.

Speaking of the term, I would also like to note my progress has been recognized by fellow enthusiast Jason Damas and his impressive retail history site, Label Scar.
Posted by Nicholas M. DiMaio at 11:30 AM

There is some disagreement about Blackbird's claim of ownership to the term "Labelscar," for what it's worth, though it's a battle that I generally prefer to stay away from. Deadmalls--a site we collectively have much respect for and was truly the pioneer of getting this stuff on the internet--did not actually start using the term until AFTER Ross mentioned the term "Labelscar" to Pete via IM in fall 2001. We don't make any claim to having coined it ourselves, not being completely certain of its origins.

DeadMalls did not begin to make the claim of *ownership* of the term until after the launch of Labelscar.com in May of this year, and it did not appear in their glossary until after the approximate timeframe outlined above. Web.archive.org bears this fact out. I found this odd, since I'm unaware of many cases where an individual attempted to claim ownership to such itemology.

Ross and I were actually both briefly contributors to DeadMalls in 2001 and 2002. I believe we were the first third party contributors, in fact, though we wrote only a few articles each and then kind of trailed off.

But anyway, other than that--great stuff! I'm psyched about your new blog and I was quick to link it as soon as I discovered it. We can't all be everywhere, and you have a bunch of really great photos.