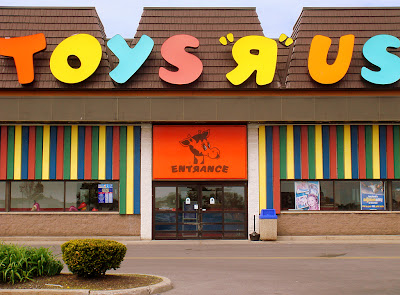 New York's last remaining brown-roof, rainbow-striped Toys "R" Us store is about to turn 20 years old. Having little to no significant renovations since its opening in 1988, the lone Clay store is also the only store left in the Syracuse region within the fallout of a closed location in nearby suburb, DeWitt last year and 57 miles apart its other active New Hartford store.

Upon the various delays of my yearning to come back to Clay, I've searched for Toys "R" Us on Flickr ever since hoping to find some intriguing photos of Clay. What really comes up (in droves)? A whole pack upon thousands of shots relating to a neon-wild ferris wheel with the huge backwards "R" plastered in the middle. Its from the Times Square location, which is one of the many mesmerizing attractions apart of the company's established "flagship" store in the heart of New York City. Yeah I saw it. It's a nice attraction, sure and is ever crowded as the City itself usually is. So crowded, in fact, that I decided to skip it upon my December visit because of the outrageous mob just waiting to get inside the store.

What better way to show the exuberance of your store; a company image all in one than the one in Times Square? I don't know, it really doesn't seem to be a big deal. I mean, this really didn't encompass the Toys "R" Us I experienced on Saturday afternoons in my homely suburb when I was a kid. 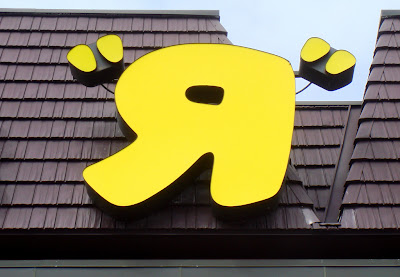 DO YOU "Я"EMEBER BEFORE THEY WERE STARS?

The real attraction, all the while, is one not too many really know about, far up in the Northern nosebleed of the (up)state, in a whoknowswhat town of Clay, a quiet suburb which houses an ever growing strip of big box retail beyond the region's Great Northern Mall, just north of Syracuse and south of another town you've never heard of where people do live called Oswego. 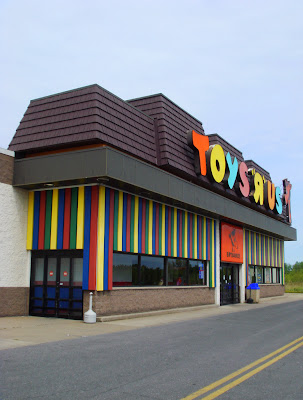 Recently, I made another excursion up that way, like one last Summer which ended early when I dropped my late Sony subcompact cutting what amounted to a roughly four-and-half hour-trip from Farmington to Clay short. Unfinished business had me wait almost a year later to return and fully capture the essence of a genuine Toys "R" Us store, unlike all remaining ones surrounding it, succumb to hideous or uninspired embodiments of bland corporate imagery all around it. 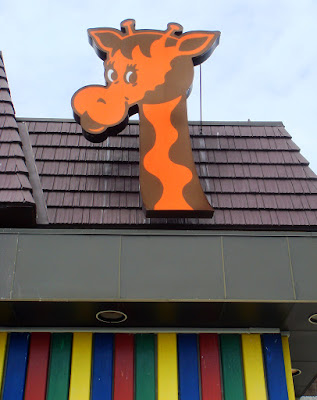 Earlier this year, The Caldor Rainbow did a report on these original stores existing today, left in various forms (mostly repaint jobs) across New York and one in Woburn, Massachusetts. However, the Clay store is the most special of them all. It has (almost) of it all. The faux-shingled brown roof, rainbow-striped wood planks along the front in their original colors, wickedly vintage plexiglas Geoffrey, and the orange-black portrait "Entrance" signage above the rickety, aging doors. The inside, still draped in yellow and blue stripes never saw the doctrinaire "impossible mission" layout (which is much phasing in favor of simple, traditional aisles) and still contain glass-casing and pull-ticket equipped aisles for video games, consoles and other high-priced merchandise just like the glory days of the 80's and 90's. 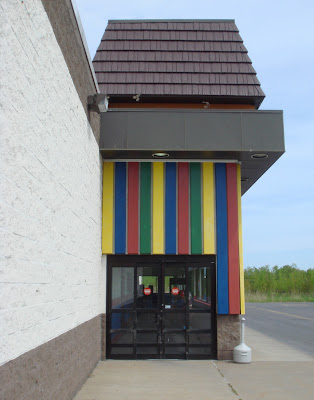 A COUPLE OF BIRDS FLUTTER ABOVE AN "EXIT ONLY"-LESS DOOR

Age has treated the Clay store rather well but not without some diminishing factors. A peeling roof revealing some stuffing and no shortage of stale beehives and birdlife harvest under and within the somewhat deteriorating roofing with shoddy scaffold lighting barely working. There was also, like noted last time around, an absence of one of the "Exit Only" plate above the side exit and some older decals and 90's-era blue-clad aisle signs from 2006 have largely been replaced for flimsy homogeneous signs seen at up-to-date stores of today. 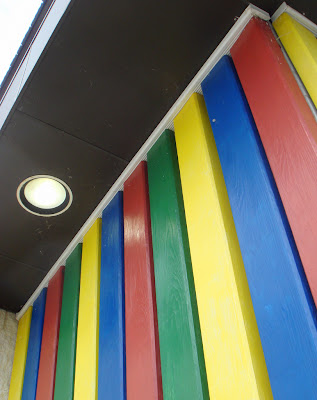 Upon my last group of shots taken at the fascinating Clay location, shortly before closing, a red-shirted manager wearing some headset who first appeared to be collecting stray shopping carts scattered about the parking lot upon a dusk, chilly evening saw my person, then soon makes way over to my jet black Honda which I just slithered back in (ain't that suspicious?) upon the sighting as I knew what he was really coming out to do: reprimand! Peeking inside the passenger window, he warned me to shelve the camera and that I wasn't permitted to take photos of the store for those security reasons. 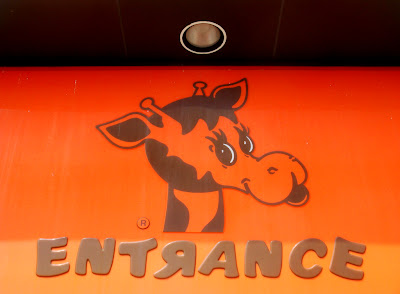 But why? This is it. This is the true face of Toys "R" Us in its prime - not New York City! It may not have a ferris wheel, Godzilla-sized Barbie houses, flashy lights or what such but that's not quintessential Toys "R" Us magic. This is. Listen up corporate, how washed over do you think kids are today that stores must be white-out? It was shortly after I got penalized verbally when I was reminded how much Toys "R" Us is not quite its former self and how seemingly forgotten stores like these contain vestiges reminiscent of what children of the 80's and 90's cherished and what this household brand of toys stores were all about.
Well there's, of course, security reasons which, being a hobbyist photographer of all that includes malls, understood completely as I know the drills. Doesn't mean I have to like it, nor do I have to comply, but we have to respect those just doing their jobs. Did this manager care that Clay was a rarity of its class banking on two decades and was a unique experience one might have to seek miles of travel to see? This should be a smalltime tourist attraction! But New York City is. 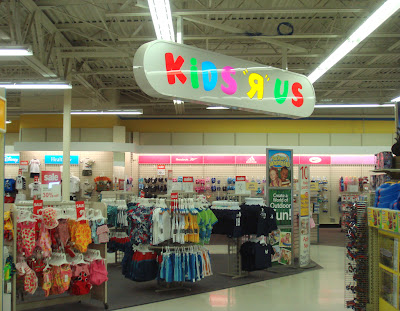 KIDS "Я" US LIVES INSIDE THE CLAY STORE

Satisfyingly, I left the next (humid) morning on a long trip back easterly on I-90, in between pesky construction zones and a $7 toll gladly acknowledging myself with plenty of photos that night manager didn't know just how many my overzealous spirit allowed me to take earlier that day.

Thanks to much research and pictures by Daniel Fife and his own travels, a few others, including friends of ours at the Ames Fan Club forums like HudsonValleyJack have been keeping tabs on many Toys "R" Us stores in the Northeast region of the country and the state of many stores in New York. With their help, I'm able to provide you with these images. 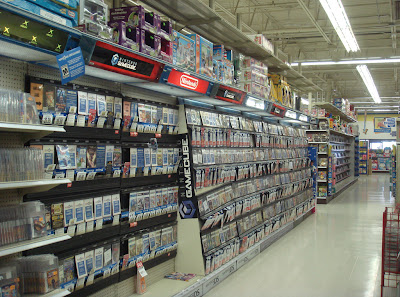 THE "PULL-TICKET" VIDEO GAME SYSTEM AT THE CLAY STORE

Apart Clay, New York, most upstate and southern-tier New York remain to be lasting netherealms of places to discover such antiquities and other stores that seem to have fallen through the cracks with some stores cosmetically lagging behind and Toys R Us stores are not much exception. As of late, many stores have seen the brunt of lazy, shameless remodeling or paint jobs all across the land, and they extend to ones in west of Clay in the Buffalo and Rochester regions; Amherst, Willamsville and another in Hamburg. 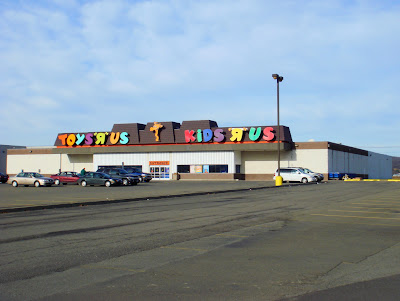 Down on the southern-tier, there appear to be lone servants remaining within the fallout of the 2006 closures. Survivors like a pitifully repainted, but immaculately retro Horseheads store (with rainbow-colored walls inside!) within a suburb and shopping haven west of Elmira and another in Johnson City, whose in the midst of its third renovation, speculatively ensuing a flooding which occurred there not too long ago as well as the addition of a Babies "R" Us store, oddly leaving the Kids "R" Us on the other side standing vacant. 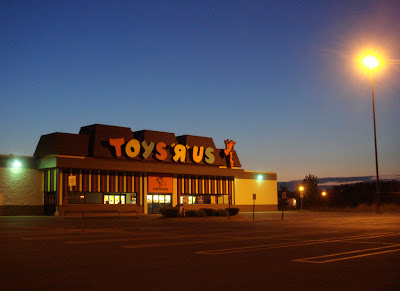 I continue to wonder why some Toys "R" Us, and stores in general, but especially Clay, never received any renovation while every store around it has been touched-up in some form. Why have they been left behind in facades of yesteryear, beyond previously updated stores? We've looked into possible reasons for why stores with older decor and facades exist far beyond their years, even when surrounding locations get the fixins. I usually pass up on speculation but we'll entertain a few reasons why Clay might remain timewarped the way it is.

We'd like your input and possibly stories and pictures of your own to share with us. Maybe you can explain how the company or retail industry works in general when it comes to renovating stores. If you've got anything, shoot it over to me at XISMZERO@yahoo.com or leave a comment. We greatly appreciate anything of the sort!

Also, check out our complete photo set on my Yahoo! Photos. I also apoligize in advance; you'll have to chug through most of the rather snoozer Great Northern Mall pictures to see them.