The Caldor Rainbow reflects the legacy of Charles Lazarus' TOYS "R" US
As most former (or still) boys and girls around their 20’s now can remember, one thing essential to our childhoods aside from Saturday Morning cartoons, Count Chocula and other sugary cereals, Teenage Mutant Ninja Turtles, and sprite-based Nintendo(s) was Toys ‘R’ Us. Nothing is as American and proudly so as ‘The World’s Joy Store’ could compare. Not the malls, not Skooters or any other video arcades, nothing.
As I awoke after an early Saturday of playing Super Nintendo, we were out to grab lunch; a kids meal occasionally at Burger King, mom would then take us up to the store where, for around an hour, we’d be invited into a majestic world of toys, games, even if that giant suited Geoffrey never made an appearance in-store. Needless to say, it was magical. We didn’t have a care in the world aside from going to school all week just to be greeted with a weekly (and sometimes, bi-weekly) visit to Toys ‘R’ Us; a world in itself for any child with limitless imagination.

Walk in the doors (the swing-opens, before sliding doors became the standard), through a horseshoe pattern and into double-lined walls of board games, costumes, franchise-branded stuff, walk to the premiere aisle. Behind the glass displays were demonstrations of fancy game consoles, some of which are long forgotten [Turbo-Graphix 16, Lynx, all three versions of Sega Genesis] even if stapled among those same hardcore gamers once wonderous children today. The next aisle over was incredible which took me a little more into later childhood to apprechiate thanks to my brother.

Rows of these plastic video game tags along the walls, stacked high, double-sided with little slips under them. Just take it to the register, and follow to the counter where a clerk would bring it to the front and it’s all mine!

“I wanna be a Toys ‘R’ Us kid!” occasionally blared over the P.A. system, reminding all of us; adult and child we were in a special place.

A few aisles down, rows of playsets, action figures, costumes, plastic weapons, LEGOs, and all that pink stuff and Barbie for the girls on the outer ones. Little Tikes “peddle” carts, bikes, skateboards and those horns for bikes; you knew who you were when you got yelled at for riding them around the store. The far end of the store was not entirely exciting; gift wrap, stickers, baby apperal and stuff.

This is the store I remember. Not the store that’s still there in Corbins Corner, West Hartford (and all the rest of them around Connecticut). 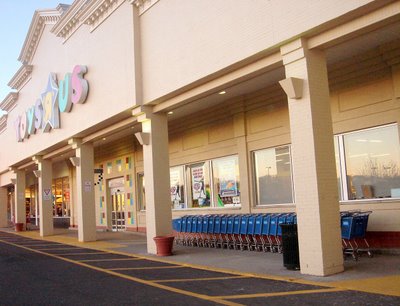 Walls painted; some white-periwinkle combo, register aisles mostly vacant except around Christmas, a store with emptiness you would probably stage a football game in where the actual video games used to be now filled with cheap head-level gondolas. Scars all along the floor from where the old ceiling-high shelving was from years off. Toys ‘R’ Us, as I knew it, lobotomized from the ground up.

Throughout it’s golden ages, about 1978 when stores began to sprout all over the country, Toys ‘R’ Us has kept a wonderful track record of supplying all the needs of a child today. Before iPods, $600 game consoles were the thing a 10-year old needed, the liquidation of board games like Candy Land, Crossfire, and Monopoly, Toys ‘R’ Us was unmatched by the competitor market today; Wal-Mart, Target, and of course, Best Buy and those other electronics stores.

By the mid-1980’s, Toys ‘R’ Us was expanding largely; strategically and commonly placing stores right across epicenters, primarily malls, favoring high-traffic, often big box saturated areas. It was perfect; nothing in any mall had what the Toys ‘R’ Us across the street offered and it made out to be the perfect formula.

Kids didn’t need Nintendo games as much as they do now, but stores like Wal-Mart and Best Buy were far off and Electronics Boutique (EB, EBGames, later and now owned by GameStop), Babbage’s (later branded as GameStop) were for the big boys; not the kids or even teens. They had the market in their hands; a video game market which was largely skewed towards children and teens, through the changing times pioneered by Sony PlayStation, adults play them now. The games were affordable and the selection was unstoppable; nothing any other department discounter [expensive for video games, at least] Bradlees or Caldor could offer. But the market has changed drastically today, this and a few other things could explain the long lost friend that was once my Toys ‘R’ Us.

The company, which has gone through a few corporate alterations throughout the years, including John Elyer, who bungled his own once competition as CEO of FAO Schwartz, was stationed as the new CEO of Toys ’R’ Us and envisioned a new, eventual ill-fated direction for the Toys ‘R’ Us name. One of the prime movements was to redesign most stores in accordance to what was once reffered to as the Concept 2000-model, and has become the store standard presently.

On January 9, 2006; the company announced the closure of 87 stores (including Babies ‘R‘ Us conversions). While none in Connecticut were hit, many stores across country saw their eventual closure as soon as Early Spring to the purge.

This startling news echoed back to my childhood store chain, on the verge of what I saw to be trouble, prompted me that the past is certainly dying; as is a part of me! With this news and a recent dream of a distant memory shopping at my local store with my dad, my wake up call from a vivid dream came to me immediately thus my indescribable infatuation for Toys "R" Us brewed strong since. In March 2006, shortly after my bizarre revelation, I launched a personal campaign to traverse the Northeastern tier of the U.S. searching for older stores, and some that have closed recently. I would lie awake at night attempting to remember the year my near and dear Danbury, Connecticut store remodeled from a once discribed "haunting" brown-rainbow facade, swearing it had only been years off.

I then began to remember everything that made the store so special to me then. Little details from the far off; the grandfather taking my brother and I on a Friday evening and not getting a $60 LEGO Monorail, playing with those Tiger LCD Handhelds, the launch dates and pre-sales for games, arriving on Saturday afternoon to see if they got any new G.I. Joe Street Fighter II action figures in, and in the later years, picking up some superb deals $20 Nintendo 64 games.
Leading up to my trip to meet ends with the soon-to-be-(now) departed Holyoke, Massachusetts store, which was closing in just a few months soon led to a two-hour plus trip to Woburn, Massachusetts to reunite with a surviving store resembling a childhood memory. 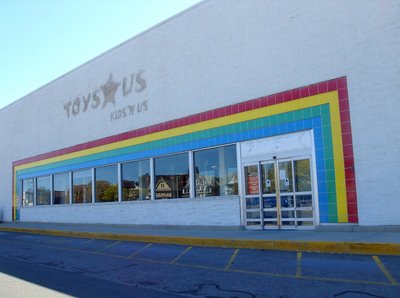 A now vacant Medford, Massachusetts store, succeeded in one of a fallout competitor, Child World. This store, like many others in the Boston area, was a victim of the 2006 wave of closings.

Please join The Caldor Rainbow as we unveil more knowledge in our quest of Toys "R" Us stores in the near future.
Posted by Nicholas M. DiMaio at 2:51 AM

The facade on the Medford Toys R Us has been demolished. I'm not sure what they're building exactly but the front was torn out and then is being cinderblocked up... whatever's going there won't have any big windows, that's for sure.