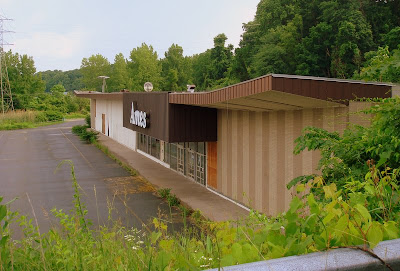 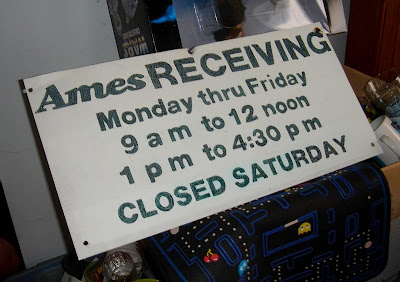 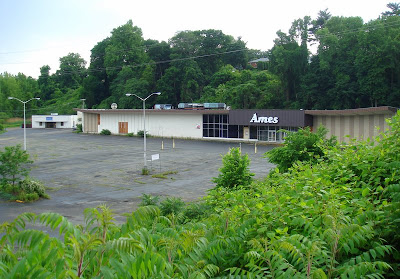 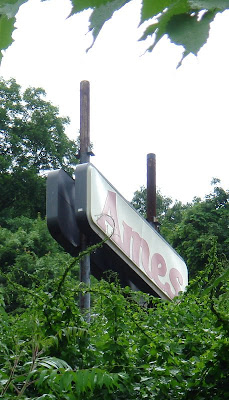 *EAST HARTFORD store has vacant entrance, no more signage but evident window decals. Space has been subdivided into Petsmart (left) and TJ Maxx.
Posted by Nicholas M. DiMaio at 1:45 PM

Pretty awesome stuff in that photo gallery. It was cool to see how Dave's changed some things and left other things alone. You should have asked for one of the Ames carts! It doesn't seem they are using them, seeing that they are in a back room and behind the store, rotting away.

The entire building where the Dayville Ames is now empty since the closing of the Beit Bros. next door this past summer. The small adjacent building which housed a Carvel and a thrift store is also vacant, sign of the times but not good if some developer comes along with an interest in the site, especially now that Killingly Commons (with Target, Michaels, etc) is open across the highway.

The only Zayre location I remember is the one in Norwich, which is now ShopRite. It's undergone quite a few facelifts since 1988 but maybe there's still some trace of Zayre to be found. Doubtful...

Panda: When I went there in 2006, there were carts all over the property including red ones.

Megan: Dayville is one store I have not visited yet though I will likely take a trip out there soon. Dayville and Seymour are the two sites that seem to be impossible to fill.

Hey Nicholas! I wish I had nabbed some sort of artifact from the Ames that was once in Medford, MA. So many opportunities missed. I remember gazing through the window at the store, and all the stuff that was left behind. All the times I could have gone to the back of the store...all the stuff I could have nabbed...wasted time. I mean, the Ames isn't even there anymore. For some stupid reason, Stop and Shop moved out of their old Super Stop and Shop building, knocked down the old Ames building and built a new REGULAR Stop and Shop in it's place. No "Super".

If you go to Dayville, ring the recieving door bell; you can still hear it ring inside as of a year ago.

East Hartford was cut up for Petsmart, but TJ Maxx is the same size it always was when Ames was operating.

This is by the Big E? No way man, one time we got stoned after the Big E and I think we climbed up on the roof of this place and started throwing stuff off. That was a groovin' time. Sigh, I haven't been arrested in ages, 'cept for the DWIs last year. Hey, Panda guy this is a bitchin' site, brings back all sorts of memories. some not too good.

Pretty awesome stuff in that photo gallery. It was cool to see how Dave's changed some things and left other things alone. You should have asked for one of the Ames carts! It doesn't seem they are using them, seeing that they are in a back room and behind the store, rotting away.

I've been visiting the blog, and you are doing an important work. I really appreciate this kind of information. The blog isn't bad, but you can change the style to written. Maybe you need see other website to do it. j23j

Can't believe that the Springfield St. Ames building still has the Ames sign on it! I've lived out of state for over 11 years and it was empty like that when I left!