At this time, we'd like to share a few points of interest and forecast some stories here at The Caldor Rainbow. 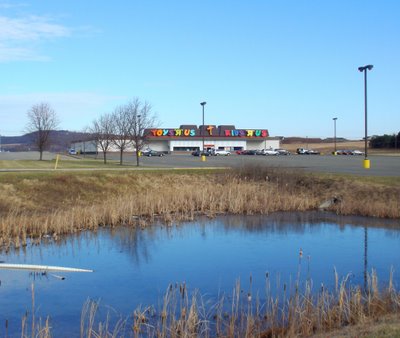 Just recently, as in last week, Renee and I took a trip to Horseheads, New York; located in the Southern tier of New York (near Elmira) to document one of the remaining old-styled Toys “R” Us stores in the northern tier of the U.S. While down there, I was also able to snag a whole set of shots from the nearby Arnot Mall. I have posted a full gallery of both journey’s on my Facebook account, as there are just too many to post here. In the near future, we will do a short expose on the Arnot Mall and area. For now, you can view the galleries with commentaries by myself. 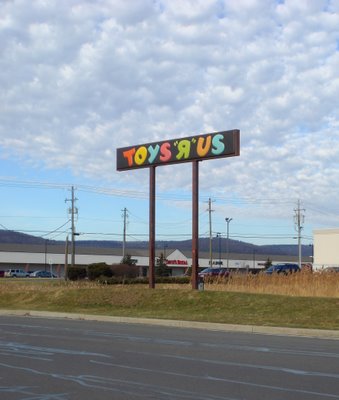 Click to begin: Horseheads Part I: Toys "R" Us, Horseheads Part II: The Arnot Mall.
On the way back to Connecticut, we stopped in a few malls along the way including Newburgh Mall, located in Newburgh, New York. It’s about 15 minutes from the CT border, along I-84, even with that information, we had to duck off the highway last minute as there were no warnings. Upon arrival, I recognized that this was the mall with a particular interest; it once housed a Caldor. What was once a Caldor, now a plentiful New York department clothier, Bon-Ton. Another thanks to D_fife, whose pictures provide a wide view of retail along the upper ends of the country on The Ames Fan Club forums, has provided a hint of a rainbow-era labelscar right on the front of the building which we went ahead and shot ourselves. 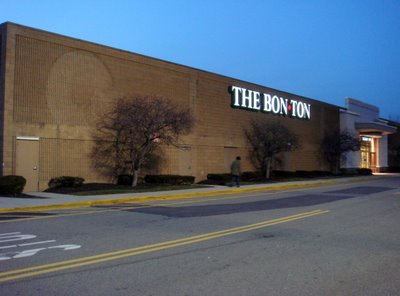 Bon-Ton, a former Caldor at the Newburgh Mall neglectant to remove a rainbow-era Caldor labelscar (to the far left end).

The mall, like too many other lower-eschelon centers, was outright about shunning photographers. Luckilly, my lens was destined to snag a genuine shot of a surviving rainbow label scar. Renee hurried me along as she informed me an officer (not mall security) was approaching my six. 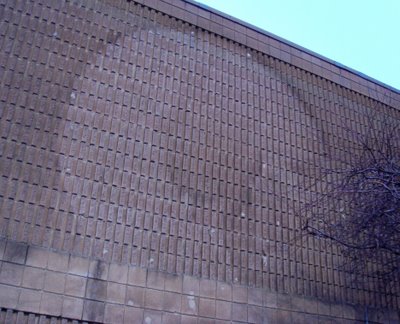 And if you look close enough, you can see were they patched holes from the "CALDOR" lettering. This one hung so low, I could've once touched it!

While the mall itself wasn’t any sight to see, it sure was like most of these smaller, forgettable malls, had relevant vestige of history within a strict regime of anti-cameras. All in all, the mall was lame which didn‘t prompt me to steal many shots (since there was a good lack of security patrol inside). It’s discouraging when malls have these silly policies but I suppose this is what happens when your management institutes these codes of conducts being over-protective arses. 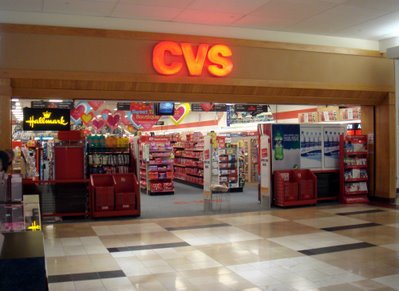 An age-old, wooden-facade CVS inside Newburgh Mall is surely a relic from the mall's conception in 1980 complete with redundant CVS-sign label scars (click and gaze at the full-size).

No offense to Urban Properties Growth, but your mall sucks as it is upstaged all around the map. No one would want to steal your trade secrets; you have no highway signs because of this. Perhaps your policy should be to invite people instead of shutting them down with a litany of codes before entering for harmless photography that would only do you free advertisement. Perhaps a little biased, but I’m really getting sick of these malls and their overzealous policies. End rant. Needless to say, their hapless rules didn't stop us. 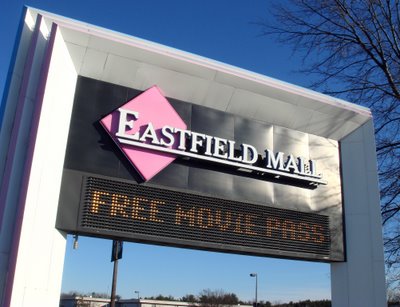 Within the next couple weeks, we’re attempting to visit a few lesser-traveled Connecticut malls we couldn’t get in the past few months due to the holiday season and extreme amounts of traffic and decorations. Just today, we visited the Eastfield Mall in Springfield, Massachusetts; another mall which has very strict policies against photography. 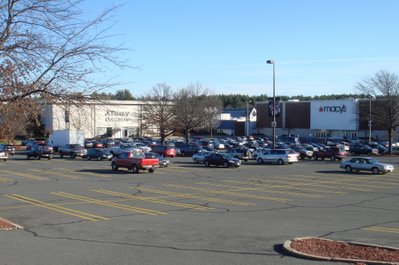 The mall, which is also flooded with surveillance (including those flashing parking lot patrollers), but most likely because Springfield is higher on the crime scale. Unfortunately, I wasn’t able to score any interior shots - especially the way-back center court (even after asking the chief security guy watching the cameras) but I did obtain a slew of exterior shots of a fascinating, relic of a mall. These guys are so overprotective of their mall, they even don it on their website! 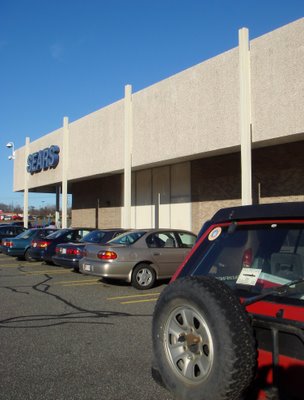 Least likely mall to see the new Sears Gwinnett prototype? This 1960's-era Sears still had the "Sears, Roebuck & Co." decals on the doors!

Next week, we will be unveiling new chapters in our Toys “R” Us history accounts we’ve begun just this Saturday. If you’ve come to the page and found the update to be too big (i.e. your computer freezing or lagging), you were right. We’ve scaled down the update and decided to divide it into a more organized series we’ll be rolling out over the next few weeks.

Until then, we'll see you soon!

What did Old Navy replace at Newburgh Mall? It looks like it used to be something else.

Old Navy replaced Steinbach. When Old Navy moved in back in 2001 they redid the storefront inside the mall.

I visited the mall many times as a kid in the late 80s/early 90s. It originally had sealed concrete floors with dark bricks around the edges and there was a big planter, sort of looked like an oasis in two of the center courts. I was surprised when they renovated in '98 they took them out, it was unusual, but very nice. In the sitting areas where the benches are were two plants, two postlights (smoked glass with round globed bulbs inside) and a mirrored ceiling above you.

The Caldor was typical of any Caldor, another in the area looked identical to it on the inside. It had the Caldor rainbow with the clock in the middle over the inside entrance the store, and I believe they had a snack bar as I remember getting hot pretzels after going through the checkout. I often thought they took some of the character out of the mall when they renovated it.

I was wondering if anyone knows the names of all the original stores at the Newburgh Mall.. I will give the ones I know (after much debating with spouse and brother) and maybe others can add on to complete it. Im not so worried about all the side stores or kiosks but the main mall area itself, but if you can remember side stores and kiosks..then feel free to add them.

Oh, I forgot some other stores...

can anyone remember the music stores there?

I think one was called "easy listerning"