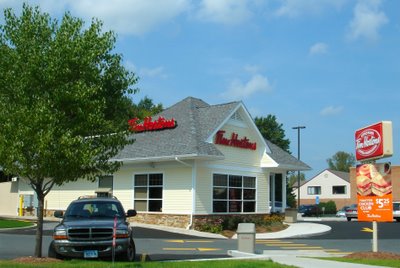 Back in July, the lot beside Walgreens on the cross between Routes 10 and 372 in Plainville was slowly showing progress of something on the former, and long departed site of Pilgrim Furniture. No more than a month later, Canadian-based coffee house chain Tim Hortons announced they were to open a store right in in the center of Plainville. Tim Hortons, which has very few stores in the northeastern portions of Connecticut in Meriden and New London areas, decided that Plainville would be the next elusive store to enter the Connecticut marketplace being one of the only stores in Hartford-area Connecticut. No more than just a few summer months, Tim Hortons opened on Friday, September 15, 2006 to a public of which who may have never even heard of the “Always Fresh” coffee and pastery chain. 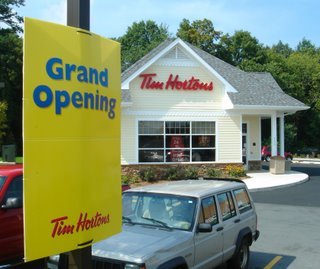 Tim Hortons now competes with various Dunkin' Donuts, Starbucks, and Donut World all of which located a few miles away.
Tim Hortons doesn’t just serve up coffee, instead, they offer a bevy of both breakfast, lunch, and dessert menu items from doughnuts, turkey sandwiches, soup, and even iced beverages. Around the same time as Hortons conception in Plainville, franchise-owner GAD, Inc. opened yet another Dunkin’ Donuts right on the former site of Just Java on Farmington Avenue/Route 10, of a now bankrupt independent coffee house, to possibly counter the traffic of cars seen at the lunchtime crowd of Tim Hortons today. GAD, who franchise owns many Dunkin’ Donuts shops in Farmington, New Britain, and Plainville will see a new challenger with fresh new concepts beyond breakfast sandwiches, sweets and sometimes, stale coffee. 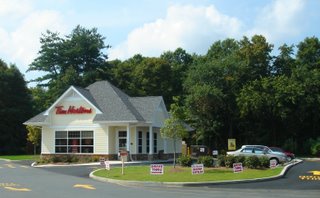 Tim Hortons is open 24 hours and contains a Drive Thru to ensure convenience despite how much I despise them.

Seeing as Dunkin’ Donuts holds my favorite coffee, when brewed correctly and fresh (two of which have a hard time meeting consistency), I set foot into Tim Hortons for the second time in my life and walked away very much pleased. A reasonable $1.45 for a medium coffee versus GAD's Dunkin' Donuts medium $1.83 (some franchisees price differently) that’s fresh, hot, and friendly-served to me is something I’ll remember when I’m on the prowl for a good coffee and am sick of Dunkin’ Donuts problematic employees and sometimes dissatisfying coffee. Having been a former Dunkin’ employee, and long-time frequenter, I’m not being irrational more or less testimonial.

Swing by if you're in the area, as they're open 24 Hours (in competition with the nearby Dunkin' Donuts) even if you must pass ten Dunkin' stores and discover why Tim Hortons is refreshingly different from Dunkin' Donuts or Starbucks. What better face-name recognition to serve up hot coffee than a native hockey playing Canadian?! 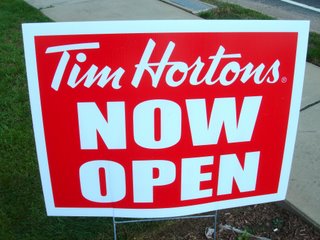 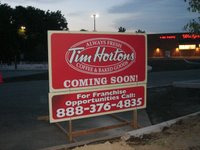 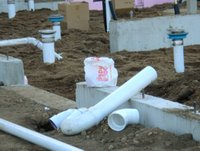 Construction workers for Hortons caught red-dead handed leaving a Dunkin' Donuts bag on site.
Rocking Heart
Being the gamer I proclaim to be, I’ve been slacking a lot in keeping up with games. Being the up-to-date, avid game music listener I am, I am unyielding to proclaiming my burning anticipation for an upcoming arrangement album from the Wild Arms series with WILD ARMS Music the Best -rocking heart-. The album is not only packed with 17 select arrangements from the five Wild Arms games but has incorporated famed Falcom composer and arranger Ryo Yonemitsu (to name a familiar name) to arrange them along with some personal favorite musicians MASA on guitars (Shin Sangokumosou 3, 4 to name a few), Masato Honda (T-Square, Rockman X arrange album) and Mitsuru Kanekuni on Sax (Double Dragon II, V’ Ball arrange albums) in a foray of rock and fusion elements.

Don’t feel absent; I’ve never played a Wild Arms game nor am I very familiar with any of the original soundtracks. The website has samples, even if you don’t listen to game music casually or mostly (as I), the music generally invites music and melody lovers alike. My senses are already melting over “FATE BREAKER” so give those a listen by clicking on the little headphones logo; you won’t be disappointed.
Posted by Nicholas M. DiMaio at 2:10 PM 3 comments: