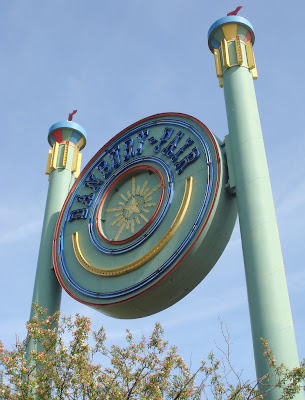 Joseph Rifkin has informed The Caldor Rainbow that the much shaded, mysterious, succeeding anchor to a vacant Filene's at Danbury Fair Mall is possibly to become Connecticut's second Nordstrom.

The upscale department clothier, Nordstrom, currently and exclusively anchors the Taubman Company-owned Westfarms on the West Hartford/Farmington border. News comes shortly after Nordstrom was mentioned a few months back, speculatively planning to roster as anchor space as part of a proposed expansion at Westfield Trumbull, as we reported last month.

The space is deemed by Macerich as a "new shopping experience in progress."

A few rumors have been floating around on the internet, speculating as to what the fallen anchor might become in the midst of the mall's on-going renovation; a Border's, Dick's (upper-lower combo?), Bloomingdale's, and a readily believable, none-of-the-above 'grand entrance' and parking garage combo to attach to the newly planned central court.

None of these rumors have been officially addressed by Macerich.

Currently, the space formerly held by Filene's has been rented out to a Halloween-themed store, and will soon give way to a Christmas-themed one in November. Those who lamented their chance to see Filene's upon its fateful closing days back in 2006 will have their last chance in to step inside a largely preserved interior in the coming months. The store will likely shutter again in January 2008, where plans on the site's future will presumably be set in motion.

The Macerich Group, owner of the Danbury Fair Mall, has continued to remain silent on the details of what's to come regarding a year-plus vacant Filene's, which faces the mall's frontage serving largely today as a temporary trailer lot (and possibly, suspected bird-feeding terrain). While shadowy about the anchor news, the company has been very open about the renovation process, and has pledged in the past it will not disrupt shopper's at a transitioning mall which has most of its work done after hours.

Seemingly snail-paced from a macro picture judging by what we reported (with pictures) back in early July, the The Macerich Company development is showing progress; the food court is been partially opened but will complete in November, and the renovated bathrooms now relieve shoppers from crowding into anchor stores facilities. The slated renovation, whose goal is to celebrate and rejuvenate a 20-plus year old Danbury Fair Mall is still on to complete by Spring 2008 though many new stores have opened throughout 2007, in the midst of the dust.

The Caldor Rainbow has no visuals of our own to put fourth, so please refer to Joseph's Flickr gallery of pictures taken September 30, 2007 (with the new Sony DSC-T200!) to see the differences and developments.
Posted by Nicholas M. DiMaio at 12:49 AM 1 comment: