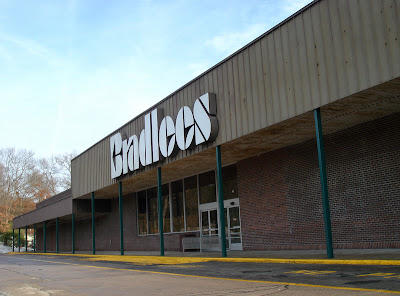 Thanks to some research by us, with great help to Microsoft Live Maps, we've confirmed a lone, surviving former Bradlees department store nestled within Foxborough, Massachusetts -- which is also the last vestige of a completely in-tact, vacant Bradlees within the state.

For some time now, we've been fascinated at the marvel that is Live Search Maps apart of Virtual Earth here at the Caldor Rainbow. When we began using the program created by Microsoft last year, there weren't many advancements in Microsoft's satellite imagery program that hadn't already raised eyebrows since Google's own Satellite feature. 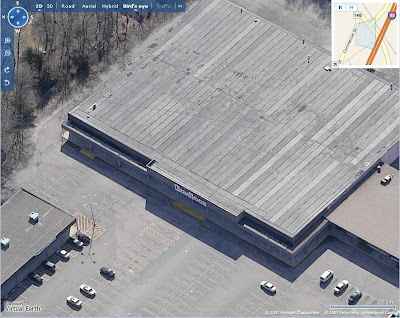 But now, we see many states are now apart of the most impressive feature the program sanctions: Birdseye Imagery.

Because of these impressive steps, we're now able to make researching far outside our scope more convenient. While not absolute and often times uncertain, our range of visual research has been extended to further investigate sites we don't always have local watchdogs to scope out.

As we've trumpeted before, the New London, Conn.-based Bradlees department store chain was beloved among northeasterners before it shuttered all remaining locations in early 2001 following a day-after-Christmas 2000 announcement of ceasing to continue business after a half of decade of retailing. In its later years, Bradlees housed it's corporate affairs within Braintree, Mass., roughly ten miles outside the state's capital of Boston.

In 2001, Bradlees left a hefty 33 vacant properties within Massachusetts as opposed to only 17 in its neighboring, origin state of Connecticut. By 2008, all but one property has been swallowed by today retailers which have included Wal-Mart, Kohl's and Burlington Coat Factory -- but not Foxboro. 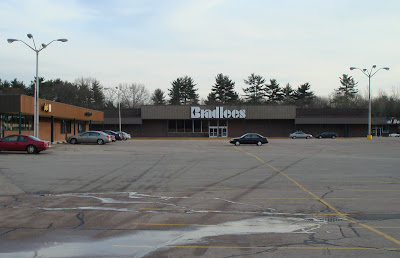 While taking almost ten years to almost fully secure new homes for the former holes left by Bradlees, the question remains: Why doesn't anyone want the empty Foxboro location at 30 Commercial Street?

About a mile off Interstate 95, along (MA) Route 140, the secluded Foxboro Bradlees sits vacantly beside a somewhat dried up, islandic Foxborough Plaza, anchored by the bargain bazaar Ocean State Job Lot, a handful of smaller stores and an outparcel Papa Gino's restaurant.

Bradlees opened its Foxboro location at the height of its expansive years on April 22, 1982 and made it all the way to the chain's finish line in 2000. It has since been banking of eight years of vacancy.

The store is a true relic apart being brown-draped, with brown-and-caramel toned counters and a rarer white-faced logo, escaping the typical red used by the chain throughout the 1970s until the end. With inexplicable recent Stop & Shop bags seen at the checkouts, we suspect the husk was recently used by the former parent for limited use/training facility despite the plexiglas Bradlees logo still up there.

The Caldor Rainbow took the trip in early January (on a surprisingly balmy afternoon for early Winter), so we hope maybe some of our southeastern Mass'ers can tell us more about Foxborough Plaza, and maybe a little more background on what was here before Bradlees took over. There's a label scar of sorts, but it's largely indecipherable so we're hoping you can help. 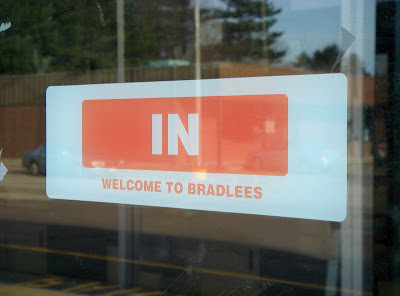