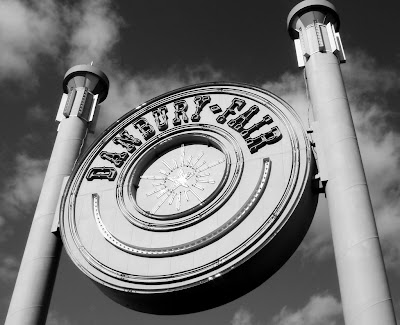 Will Macerich replace the neon "Danbury Fair" sign in accordance with the upcoming remodel?

According to the architectural firm 505 Design, the outfit commissioned to renovate the Danbury Fair Mall, it appears there are a series of new signages displayed at the revitalized mall in and outside as part of the mall's 21st year, 21st Century renovation project, which came to (red and green) light(s) at the cusp of the Holiday shopping season 2006 and shortly after, an interest mirrored by The Caldor Rainbow.

As regulars know, this will strike Danbury Fair Mall's first renovation since its opening over 20 years ago, and will seek to vastly improve the decoratives as well as the tenant set to accomodate a more affluent appeal, which has since eluded the mall's imagery with a more humble setting of the 1986 mall.

With all this change, will all this effect that shining star neon on the outskirts of the mall's lot? While Macerich has expressed no plans to revamp the exterior at this time, and the site's displayed signages seem to only await to replace existing older ones at street level, we can't help raising awareness for the ultimate one. Namely, the towering shining star neon, a former symbol of the massive mall at the edge of Danbury has been familiar to patrons and motorists who've overlooked the grandiose, two-level Danbury Fair Mall on the I-84/US-7 split for many years. The signature, vintage-esque neon sign on the outer-limits of mall property could face peril soon.

The iconic neon, which has graced the mall since its 1986 grand opening as the primary icon to attract shoppers has been a staple of Danbury. The Caldor Rainbow contacted Macerich upon numerous attempts, inquiring about the fate of the sign, but were unable to obtain any comment (though one receptionist mistook me for expressing interest to purchase it!).

The Caldor Rainbow hopes Macerich will observe the vestigial importance of the sign and seek to preserve its heritage of the mall's history by keeping it gleaming atop its perch on the outskirts of the property, to remain as a beacon of those who've sought its beloved sheen all these years.

As far as the renovation has been going, we have not visited Danbury Fair since July 2007, but have heard and seen it coming along more so than the official site claims. You can refer to the firm's website for a more updated set or just head over to our contact Joseph Rifkin's Flickr Set. Certainly, we've never seen such a cutting-edge, quasi-experimental look not too far from those seen during the 1960s-70's boom for a shopping mall, which edges one such impressive effort seen at Natick Collection and a spread recently done by our pals at Labelscar. The Caldor Rainbow notices this remodeling effort, and one such doppleganger in New Jersey will further diminish the heritage of the original Fairgrounds to which each mall were richly modeled after.

While the renovation is still on for a Spring 2008 completion, our contact Joseph Rifkin shows us most of it has already been completed. You know we'll be back soon for more interior developments soon but in the meantime, check out our proud, "historic" photo sets of the mall shortly before the reformat.
Posted by Nicholas M. DiMaio at 12:11 PM 10 comments: