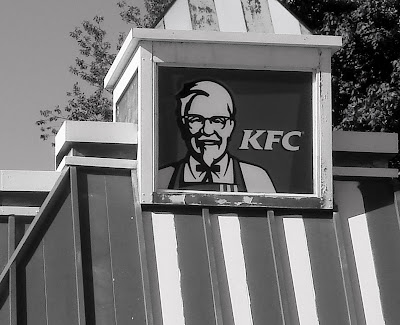 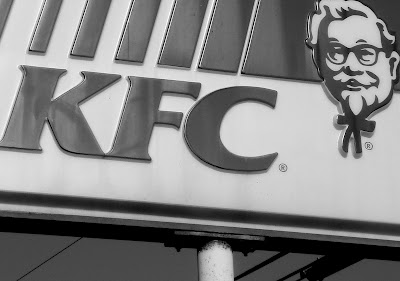 Who doesn't love historic photos? Furthermore, who doesn't love historic photos of shopping centers? From the mid-70s? Jackpot! Luckilly, the Plainedge Public Library of working class town Plainedge, New York (Long Island) caters to the needs of those looking for popular restaurant and supermarket chains peppered in its "circa 1976" historic scanned photo album. Many of the submitted photos here are from Plainedge area towns Bethpage, Seaford, Massapequa and the like. If you live around there, maybe you can identify the landscape 36 years later. Here's some of the highlights... 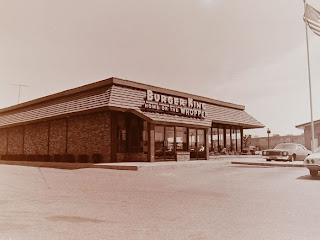 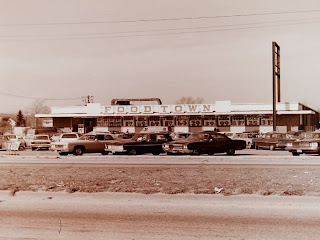 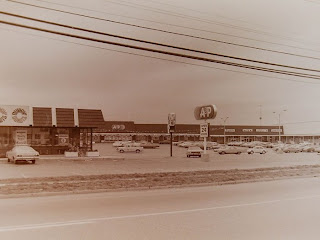 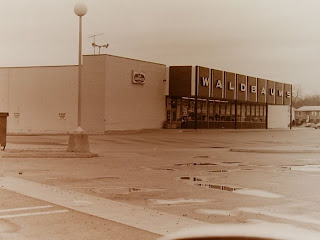 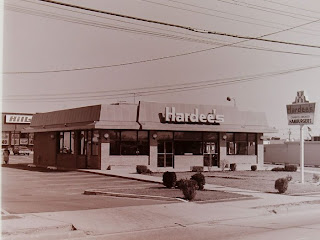 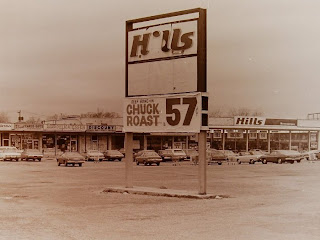 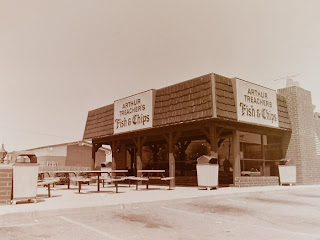 Most of these sites, like their chains, are gone today. I know Arthur Treacher's husk is on Washington St. here in Middletown, CT as a Subway while the Kawasaki dealership on Silas Deane Highway in Wethersfield was likely a Hardee's. An unmistakable 70's Burger King with original lettering from the 60s-era of the chain before playscapes or drive-thrus eye-sored the frontage of the many tacky-blue roofed BK's of today. And oh, that classic shingled Dunkin' Donuts with that circular donut logo that only came to the attention of the chain upon its 60th anniversary is here before many of them decayed by the 90's.

There's about 7 pages worth of great sepia-tinged views into the past. If you like banks, gas stations, diners and popular establishments, take a look. We hope to unearth more of these gems and encourage more libraries to make their digital collections available to everyone.We simply ask you do not reproduce these photos on any sites a la Flickr.

We've got some more news from The Island coming.
Posted by Nicholas M. DiMaio at 11:11 AM 5 comments:

Steely Dan took almost 20 years to come back with Two Against Nature. Supertramp lost the high-pitched guy and still came back. Sure, they haven't put out an album in almost ten years but I digress.

After two years of hiatus, The Caldor Rainbow will return.

In our absence, the world has continued to spin. Thus, many of our reports that made up our foundation have been left to hang in the balance to lack of updates and on those reports and, of course, spam. But before we delve into new reports, we must assure you that we are remodeling our focus.

Not too much, though or else we'd lose sight of The Caldor Rainbow.

For a few months now, I've been debating what to do with The Caldor Rainbow with regard to not only my readers but presence we have across the internet. I've even accepted the site as a past time pleasure, a bygone project since neglected, indefinitely abandoned leaving it to have its stamp on the internet for those looking for tidbits of info on defunct retailers no other friend sites offer. But after years of shuffling, it's been decided The Caldor Rainbow will live on officially now to exist as a dual entity; here on Blogspot and on Flickr.

On our Flickr page, we have over 5,000 exclusive pictures, many of which not shared on the website or in our reports. Since June 2007, following the demise of Yahoo! Photos, we've chosen Flickr (and not just because they gave us 4 months free) as a host to reach as many people as possible that share a passion of retail and photography. We've made plenty of friends and allies along the way. Flickr allows our reach to millions and expedites our update process without the package of a researched update thus enabling more expedited updates for our readers.

As for the Blogspot side, updates will continue within the mold of our traditional focus but ultimately our most valued updates are our readers' input and submissions. Without you, we would have never seen the New Britain Caldor that inspired this blog to be where it is today. Our vastly researched Connecticut Store Locators on the big three keeps the former presence of these fallen retailers as a testament to their legacy.

Tracking The Retail Rainbows has been our goal since September 2006, as one would imagine a lot has changed almost 6 years later. Our beloved dead retail triad Caldor, Bradlees and Ames former locations are all but dried up, reported on or have been forgotten in the black hole of time. Actually, there are some still around, even if one of Connecticut's last reminders of Bradlees will be gone by Summer (or so the city of Manchester hopes). That story and more in the next few months...

So let's get some things out of the way first with a few lightning updates!

That rare Super Stop & Shop we reported on two Marches ago has been, like almost all existing Super Stop & Shops, has been remodeled and is no longer "Super". We were very lucky to capture what we did in the last months as a richly-preserved late 80's store. That dinosaur Kmart in Watertown, CT is still timewarped, a now 24-year old Toys 'R' Us in upstate New York is still preserved, the Crystal Mall has been renovated after 16 years, and the (Westfield) Trumbull mall now has carpets. We lost many more retailers we didn't think like Borders and Bernie's but Walmart and TARGET still comprise our current discount retail rivalry. Triple trump retailers Kmart, Sears and JCPenney (recently rebranding, again) is still around so, really, all's right with the world.

Before you declare us Milforded, we encourage email submissions and questions to XISMZERO@yahoo.com

Above all, thank you to all my readers for putting up with the silence. We hope you still stick with us even through the blackout. The rainbow is here to shine its earthtones once again.
Posted by Nicholas M. DiMaio at 12:22 AM 14 comments: