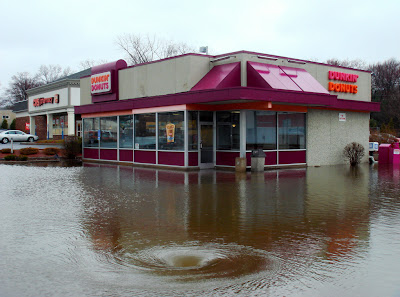 Route 6; Farmington Avenue, Bristol and Mix Street crossroads submerged!
A road closed, parking lots flooded as Bristol Police redirect traffic due to cause and effect of what appears to be record rainfall for 2007.

It all began before last weekend, barely letting up since.
If you were driving down Route 6 in Bristol early Monday afternoon, you witnessed roads closed and detoured due to a relentless rainfall which plans to keep the Northeast stricken for a few more days within submersion. 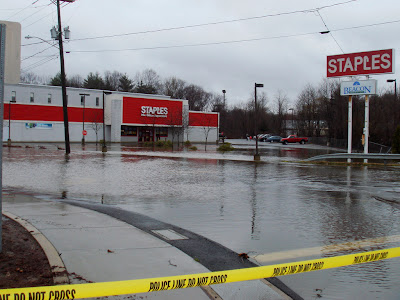 I pulled off 6 into a parking lot across the street from the beacon Dunkin' Donuts located at the intersection of Farmington Avenue and Mix Street in Bristol to see a gaggle of people; some employees to nearby business and a pedestrian photographer to witness and capture the natural phenomenon within mid-30 degree chill mixed with calm rainfall. Rushing water from the outermost portions of the mighty Route 6 and Mix Street overwhelm sewers as excess water finds sanctuary within the nearby businesses; Dunkin' Donuts and Staples parking lots.

Minutes later, we all watch on as an unyielding handicapped SUV driver chugs through the multiple-foot submerged lot, hoping to get his usual afternoon coffee via drive-thru only to find the store's area was vacated due to the result of extreme weathering. 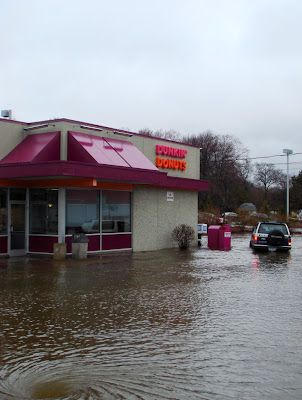 It might seem like a micro story but it ultimately symbolizes the washing of the Winter months and a renewal before we can closet the jackets and release the moths from our shorts pockets. That could happen as early as next week, as weather is predicted to reach back into the steady 50's, sun 'n clouds and beyond. We could only hope for May flowers.

And it continues to fall. 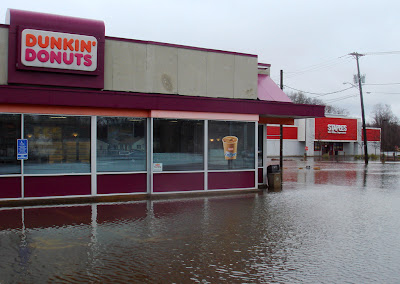 Just last May, the state was hit hard with almost a week plus of continuous, often heavy rainfall which caused the usual bodies of water to overflow, but also a forecast that saw no end to the seemingly endless showers. Luckily, and unlike the year past, nothing has been monumental enough to cause any level of great distress on the macro level.

But we should only be so lucky. 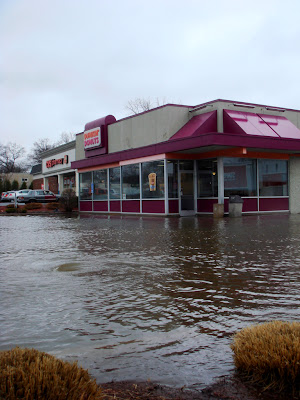 Further north, as far as southernmost New Hampshire is getting slammed with snow while Syracuse and all points north of New York and areas surrounding it are experiencing a continuum of winter weather with snowfall up to 12 feet, which can only be considered dreadful on these opening weeks of Spring. 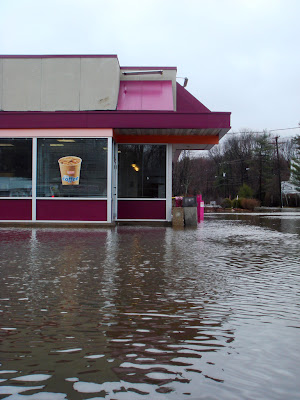 Two managers talking in on the sidewalk, frontal to a flooded Dunkin' Donuts parking lot are hoping to open the store as soon as the flooding ceases, which they hope will be within hours. A nearby CVS/pharmacy had its business nearly unscathed, with only a small fraction of its lot underwater, while Staples across the way, faced similar problems due to their proximity to a nearby creek. 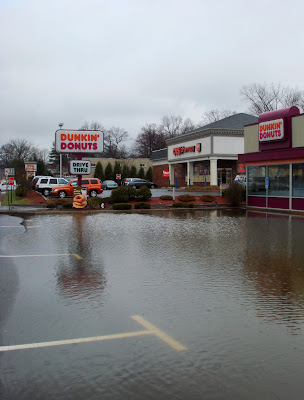 COME BACK SOON: DUNKIN' DONUTS HOPES TO OPEN WITHIN HOURS 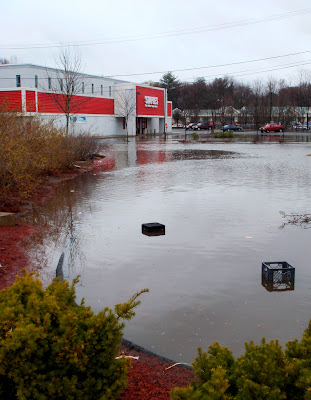 BEHIND DUNKIN' DONUTS; THE DRIVE-THRU 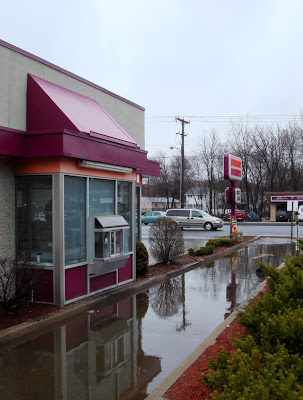 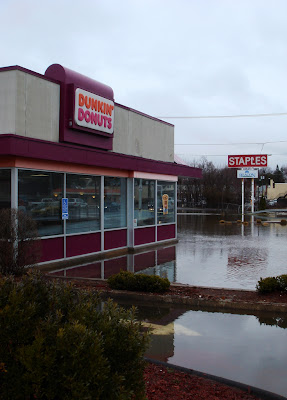 AT STREET LEVEL; SEWERS NOT ABLE TO KEEP UP IN THE PARKING LOTS 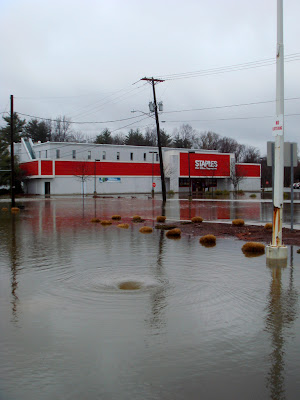