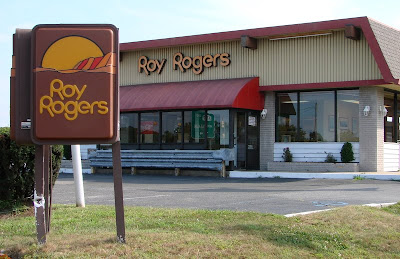 Roy Rogers himself may be dead and I think his burgers, chicken and roast beef chain seems to be following down that road. In fact, I was ready to accept Roy Rogers restaurant as an endangered specie, in critical condition of extinction. 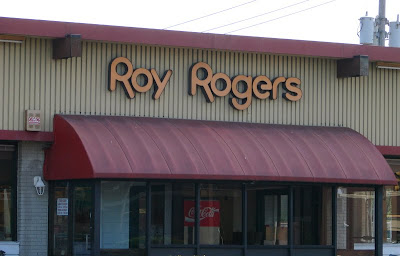 Just recently upon my travels off Long Island, I stumbled across a free-standing 80's draped Roy Rogers in the town of Shirley, near the Route 27 stretch. Thinking it was vacant upon first glance, it didn't appear to me that an empty parking lot at 9:30 AM would suggest Roy's still doesn't have a breakfast menu. 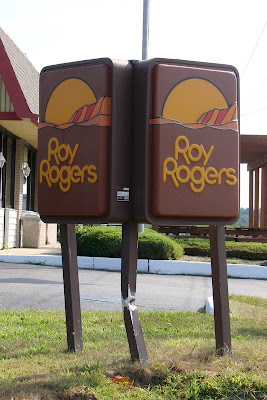 This particular location is such off-the-radar find, it even has a weirdly-placed, double-sided, now mangled road sign that's just hangin' in there -- sporting the retro sunset-over-the-canyon logo I would love to have on t-shirt.

When I was a kid, we used to go to the formerly Marriott-owned Roy Rogers restaurant chain at the Meriden Square, near (then) upper-level G. Fox (now "Westfield Meriden", ugh). Sure, it was one of the only fast food eateries at the mall at the time, but they had some distinction over the meganauts McDonald's (never really liked McD's) and Burger King (whose fallen from grace). OK, the large portrait of Roy with a wheat stem in his mouth on the wall kind of scared a tender, younger me but I always dug the unlimited, free fixin's bar no matter how smelly handed/sneezed in sanitary disaster it might've been. 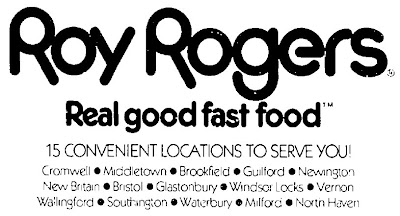 Ever since the later 1990s, the franchise-run Roy Rogers has been slowly dwindling out of many markets, leaving one oddly-newly built one in (nose-bleed) North Stonington (I know, where?) including the once well-off Connecticut market. Since 2007, free-standing locations have pulled out of Newington (US-5 & CT-15), North Haven (US-5) and Manchester (I-84, Exit 63) to name a few. A good number of former Roy's became home to up-and-coming rival roast beef chain Arby's, whose seen sizable expansion in recent years.

Now, someone go wake up the webmaster at the "hip" newly painted Roy Rogers website, tell them Manchester has been closed for over a year.

Go see more pictures on our magnificent Flickr!
Posted by Nicholas M. DiMaio at 12:00 AM 23 comments: