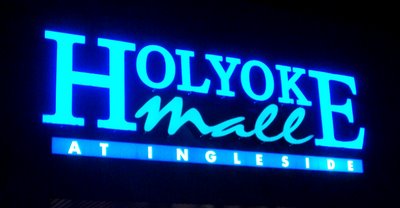 The Holyoke Mall at Ingleside is one of New England’s largest shopping centers and attracts crowds from all over the area, typically destroying nearby competition which includes the long-dead Fairfield Mall in nearby Chicopee and (arguably) takes plenty of attract away from Enfield’s one-level, one-corridor Enfield Square [Mall] (which I will soon do an expose on) on the Connecticut-Mass. border. Located easily off I-91 on the Springfield border in Holyoke, as well as off I-90 (Mass Pike), no mall can really challenge this retail mammoth, not even somewhat close by, more humble one-leveled Eastfield Mall in the Springfield suburbs. 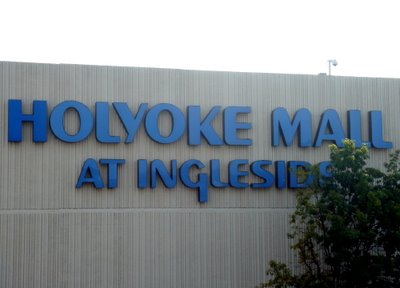 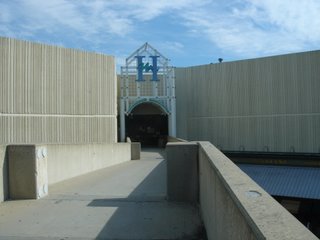 One of the mall entrances on the second level of the garage over Pizzeria Uno with the 80's-era expression Holyoke Mall emblem.
The Holyoke Mall opened in 1979 and has seen one major expansion in 1995 adding a bunch of new anchors and wings since it's conception making it, today, a crippling blow to competitors' malls and shopping centers. I have a history from as far back as childhood visiting the mall a few times in my single-digits and there on. One of the things most remembered are the signature arrow-signs hanging from the ceiling to guide guests to major anchors and restaurants all about the mall (presumably changed since as I’m pretty sure the earlier signage was white with colored arrows at one point) when the mall underwent an expansion in 1995 (most malls seem to enter the direction of expansion by around the ten-year mark). Other than that is the canyon-esque food court, located in the “basement” (which also can be said to be the canyon) of this rather grandiose three-leveled mall.

Factor in Macy’s (formerly Filene’s), JCPenney, Sears, and some not-so-typical big boxers and close-outs Christmas Tree Shops, Best Buy, discount department store Target, [a newly relocated] A.C. Moore, H&M, Old Navy, DSW Shoe Warehouse (cramped in the hallway next on the food court) and Babies R Us; formerly a Toys R Us which saw it’s end in the slew of closings last year. The Toys R Us was one of the only inclusive mall stores in the state of Massachusetts. 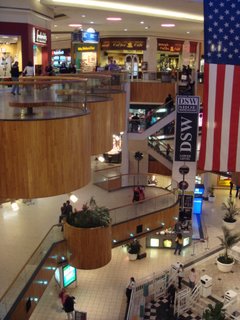 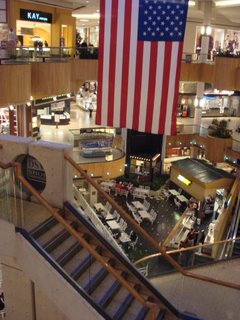 The infamous (and tiresome) box-spiral staircase with strange holes gives access to the food court. 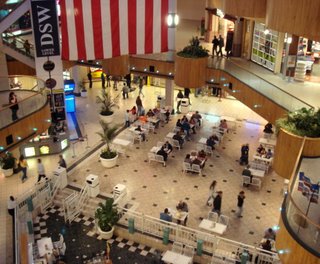 The mall has always succeeded in bringing shoppers of all over the area, whether it be central and uppermost Connecticut, southern New Hampshire or central Massachusetts with attractive stores, promising anchors, and a wealthy amount of stores. While the mall hasn’t made vast improvements on the upholstery realm (I’d swear the blinding white table/chair combos in the food court are the same as I remember when I came here as a wee lad), the selection of parcels have always been ever-changing for the vast web of attraction it gets. Currently, the mall offers a slew of hearty anchor stores alongside a handful of your typical smaller stores not around the site but right inside the mall. 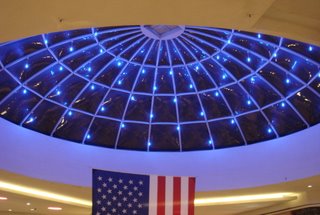 The geodesic dome of the Holyoke Mall hints at an earlier, done-away-with popular mall theme of the times. 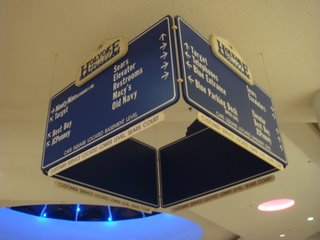 One of many "arrow directory" signs as it hangs today 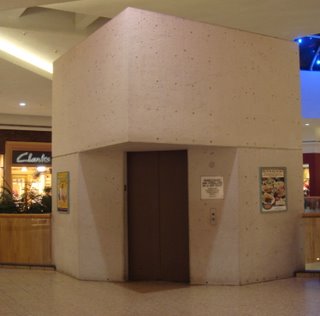 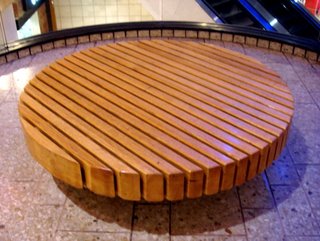 One reason I repeatedly have fought to photograph the Holyoke Mall is that it’s one of those malls out there that has never really received it’s fair share of facade renovation. The framework harkens back to the early 1980‘s, having maybe received some minor spiffs over the years, has generally unchanged it’s look throughout. Wood-trimmed borders on the upper levels, neon pastel lighting, various geodesic-dome skylights, tan-colored faux pebble floor tiling, and space-aged (wood-trimmed) foliage pots are some of the mall‘s Bill Cosby-sweater-centric-era looks which still roar on today. This mall has a mixed design of the [80’s] times along with some plenty bizarre elements but not without an overall insipid, and bland look heavily centered around uninspired decor. 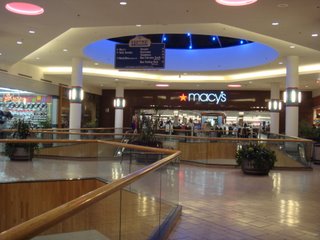 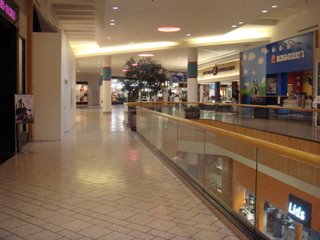 One of the few Ben & Jerry's Ice Cream shops exists in the bustling Holyoke Mall.

Unfortunately, photography at the Holyoke Mall is sought as something of a con, unlike most shopping malls, is enforced more than most visited. Most of which, whom I’ve talked, have been shot down trying to snag any pictures of the mall inside and out. The mall is typically heavily patrolled by security checkpoints inside and out, mainly because of Springfield’s troubled urban violence (Hartford, Conn. radio station WTIC 1080 radio program "Urban Voices" have reported the mall as being a breeding ground for gang activity) and Holyoke area colleges have called for reinforcement of general checkpoints for security, especially on high-traffic weekends. There has also recently been a movement to repeal a new 18+ curfew policy which restricts those under 18 not being escorted by parental authority in an effort to reduce terrorism inflicted upon shoppers by unsavory gang-related activity. 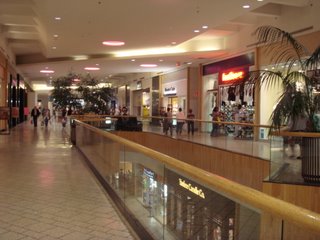 A typical corridor of the upper-level at Holyoke Mall. 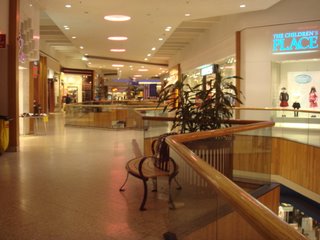 Various seating is offered throughout the mall, with wooden emphasis on everything except comfort.

Supposedly, they don’t take kindly to any behavior which doesn’t involve strictly commerce here. My own story of shooting condemnation goes back to around the time I just got my [DSC-T7] camera, reporting on the closure of Toys R Us back in February 2006.
Former Toys "R" Us (1995-2006)
Unfortunately, the 87 store closing and/or conversions into the more profitable Babies R Us (hurray for 300,000,000 U.S. citizens!) announcement earlier this year hit the Holyoke Mall location (which took a dive nationwide when most stores repositioned the layout of merchandise shortly after 2000). Some other anchors in this mammoth’s history include sister-store Kids R Us, Service Merchandise, Filene’s Basement (which most recently moved out) and once talks of a Lechmere. If you’re brave enough, you might even be able to spot (and photograph) a label scar or two from the mall's history on the mall’s aged exterior rippled concrete walls. 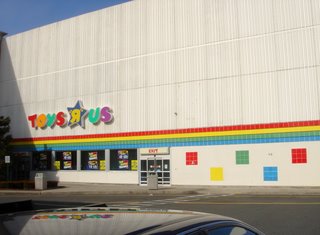 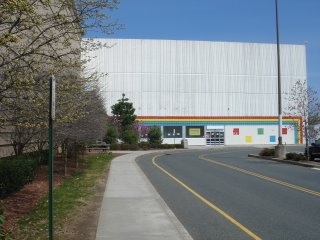 April 14, 2006 - Toys "R" Us stripped away of identity in the process of transforming into Babies R Us. 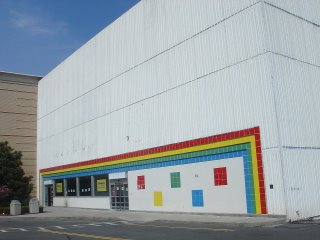 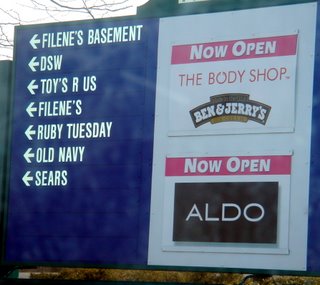 February 10, 2006 - A turning point for Holyoke Mall, the attraction sign, soon to lose Filene's Basement, Toys R Us (misspelled as "Toy's R Us"), and Filene's into Macy's. 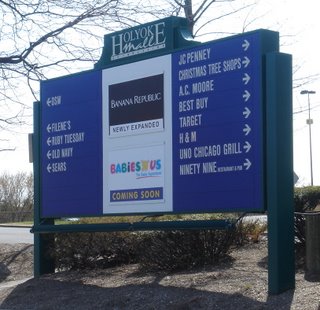 April 14, 2006 - Updated attract signage with more store forecasts.
I see a return to Holyoke Mall in the near future, where I will try for more [challenging] shots (the few I took just recently led a security vehicle to almost catch me). Here's to surviving a photo shoot when all the mall's security seemingly disappeared after 9PM. 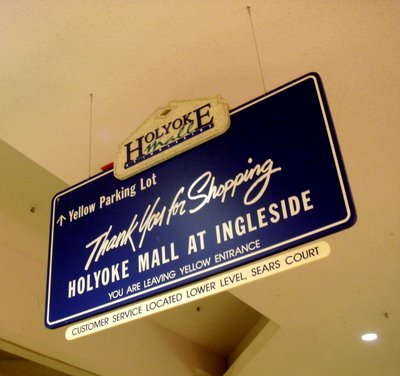