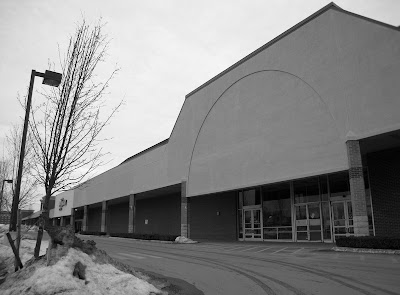 Ames may have closed back in 2003, but that doesn't mean the chain has been completely forgotten. How could it when there are still a handful of empty buildings leftover all across the Northeast and beyond?

It appears Connecticut has quietly lost another long-standing, vacated Ames in East Hartford. Well, sort of. Though it happened earlier this year, the building owners have dissolved the identity of the formerly green-clad discounter by removing all of it; the signage out front as well as a paint job thereby eradicating that iconic green facade -- thereby any history of Ames existence at Putnam Bridge Plaza on the Glastonbury line. Well, there's still the store hours and other decals left on the door. According to the retailer's website, the 40,000 sq. ft. location wedged between PetsMart and TJ Maxx is still available...

Connecticut currently has two vacant Ames locations, fully intact in Seymour and Dayville, to which we did a stories on earlier this year. 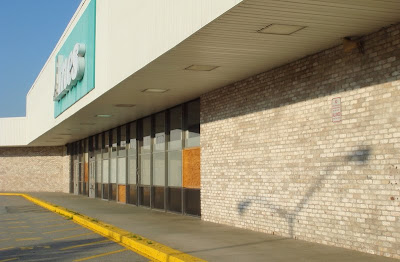 Meanwhile, in the City of Lowell, Massachusetts stands a vacant location on the City's far end, on Bridge Street in the Market Basket Plaza, near the Dracut town line. This silently vacant Ames retains its building signage not without having a taste of troubled vandals over the years with boarded-up windows. An otherwise active plaza, the Ames remains undesirable. A reader who commented on our Flickr suggests Kmart might've graced this plaza at one point with its courtesy signage scattered on the outskirts of the plaza. View the entire gallery here. 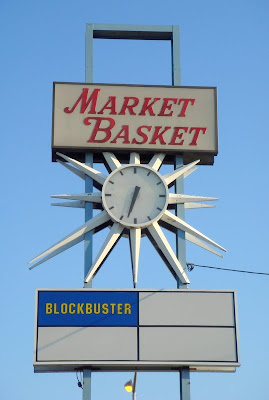 Another perk about this plaza is this vintage Market Basket clock tower sign on the otherside of the plaza. 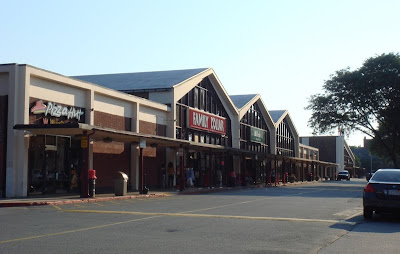 The other one on Church Street was in fact one of the earliest Zayre locations (later to become Ames) as you can see here, with Stop & Shop formerly flanking the far end. The off-kilter, shapely, multi-peaking architecture here has surprisingly been leftover from the 1960's, having changed very little since other than some cosmetic maintenance. Actually, the entire plaza on Church Street mine as well been frozen in time if not for the tenant set currently in place today as the plaza is immaculately kept and preserved all the way back to 1961. If only more plazas could retain their funky roots instead of succumbing to blocky, uninspired, cookie-cutter plazas of today. 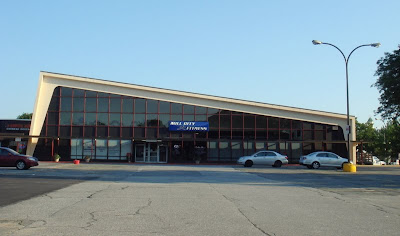 For the State of Massachusetts, Ames leaves vacancies today in Great Barrington, Lowell, Stoneham and Sturbridge of the once abundant market for the fallen retailer.

For the authority on all things Ames, The Ames Fan Club is where it's at.