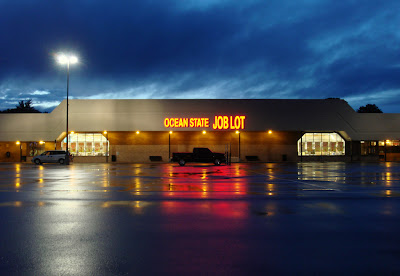 This has not been a good year for the continuous saga of The City of Bristol and Ocean State Job Lot, a closeout discount department store based in Rhode Island.

BRISTOL -- Today, the chain's livelihood in Bristol seems grim as the Winter chill creeps in -- like terminal frost. Befallen over a year ago, the crush went into effect (finally) this October when the chain was ultimately forced to close up its North Main Street / Mall at Bristol Centre location, which formerly anchored the year-plus locked up mall (awaiting demolition) since 1993 and was to move out at the behest of the city. After months of court battles, the chain's Mall lifeline is now dead.

Now, sources predict the darkening of the nearby Route 6 store shadows the 2008 swing and will begin liquidating and possibly closing in or around January 2008, according to Marc Bramhall and Paul Barbagallo, who obtained the information from unnamed insiders. 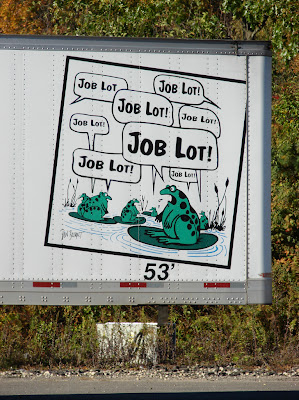 No more than one year ago, Ocean State Job Lot had two prosperous locations in Bristol; one that had anchored the troubled Bristol Centre Mall and one later inherited by a since relocated Super Stop & Shop along the Route 6 corridor within Bristol Plaza, which had benefited greatly when the plaza's opposite anchor Bradlees was demolished for the new supermarket.

Suddenly, flocks of Bradlees shopping carts, formerly sharing P.O.W.-status lingering about the parking lots of many a Job Lot, might soon rest in peace soon enough (or let's face it, they'll be shipped off to another store, continuing the shopping cart slave trade). For those unaware, Job Lot is notorious as the northeastern leader in the shopping cart lobotomy syndrome or those formerly owned by now fallen retailers who've become inherited by now fallen chains, identites hijacked (and some blacked), forced to slave after hours at such flea bag merchants and "closeout" retailers behind the shadows, further plunging them deeper into despair and humiliation.

Earlier this year, The Caldor Rainbow received such information surmising on the Route 6 branch of the Job Lot chain, whose upcoming lease renewal was in question. Rumors went afloat of the chain's desire to move into another, occupied TJ Maxx parcel within Bristol Plaza as well as reports of the plaza's owner dissatisfied at the alleged, unkempt property issues plaguing the site. There's no confirmation as to whether either of these are influencing the chain's move to close up this location.

The Route 6 location, shy of announcing any confirmation for closure is still hiring for positions.
Posted by Nicholas M. DiMaio at 11:31 AM 4 comments: