Vestige of Norwalk Kmart "Hanging" In There 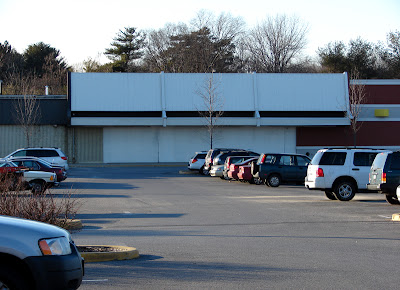 Does anyone remember a Kmart at 330 Connecticut Avenue in Norwalk?

"There's always something there to remind me."

At least that's what the U.K. new-wave group Naked Eyes said in 1983, earning their chart topper which was likely once available on cassette at this long fallen former Kmart site on the Route 1 strip in Norwalk. 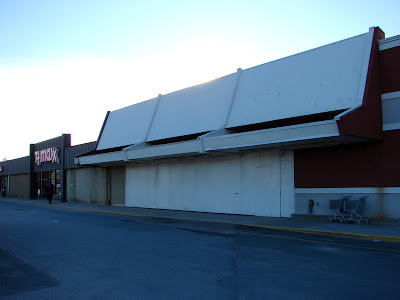 A plaza whose since lured a few tenants to occupy what was once home to a Fairfield-area Kmart, partitioned within the ailing vestige of Kmart's shadow -- with nothing but one of their signature mid-70's-era rooflines hanging above a dark sidewalk, sandwiched between future occupants TJ Maxx and Best Buy.

Upon an investigation, we had discovered the site at 330 Connecticut Avenue, which also goes by the name of "Norwalk Plaza," was in fact once anchored by Kmart entirely -- but not for too long. A heritage has apparently never left the plaza. 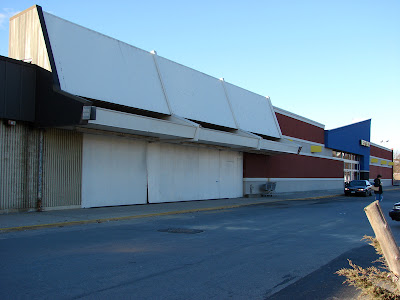 Here's where it gets stranger.

Best Buy, who succeeded now internet-banished, New York-based Nobody Beats The Wiz, or known in later years as simply "The Wiz" (which will share eternal fame on the count of many a Seinfeld re-run) removed only a couple of the "roof plys" on the right end to accommodate remodeling for the Best Buy store, a task The Wiz neglected.

Both retailers were negligent in removing the entire facade, including Best Buy who only sought to remove less than half of it. 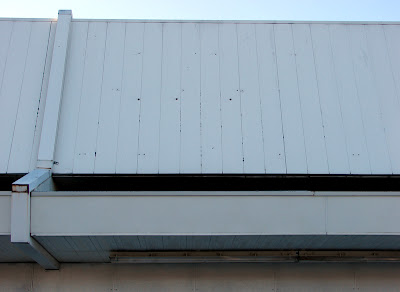 A Kmart "roof ply," representing each segment on the overall roof facade which began rolling out in 1975 until 1980s iterations of the chain's look.

Beneath the forgotten scaffold roof, which just hangs there, is a walled off, former tight-squeeze entrance/ways and showroom windows many discount department stores were well known for before the advent of mega-sized vestibules (to possibly accommodate mega people, mega items) and sliding doors. Upon visiting a Kmart these days, you'll be notice the doorways and the rich, chime of age old motors working too hard to open the swinging doors as you squeeze yourself and your cart through to get inside the store. 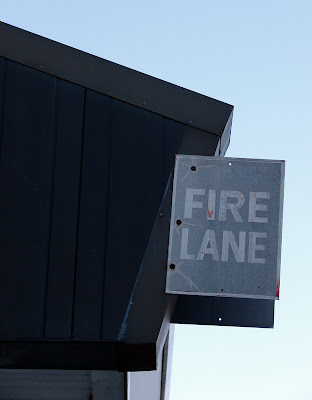 The entire site is nothing short of an oddity today, serving no purpose, largely unquestioned by the many patrons of the plaza today. There's even an interesting elderly "Fire Lane" sign.

As seen in this earlier set of photos, likely taken during the later 1990's, by the ever-resourceful property management outfit SiteRide, one can see the once signature five-ply roof scaffold comparatively bogged down to just the three it retains today. Why not just take the whole thing down?

The world may never know.

But you may know. Perhaps someone might be able to fill us in on when the Kmart opened, when it closed and how long it was closed for. It obviously was not successful, believed to have been over 15+ years within vacancy.

Currently, there are a good handful of vacant, original Kmart stores left behind in recent years' waves of closings and other retail use which include Orange, Manchester and East Haven. A former site in Derby was recently cleared away for an incoming Lowe's Home Improvement. Norwalk further bolsters the fact, adding yet another chapter of shame in that the New Haven-Fairfield market is not a good one for the Kresge Company.
Posted by Nicholas M. DiMaio at 11:25 PM 16 comments: