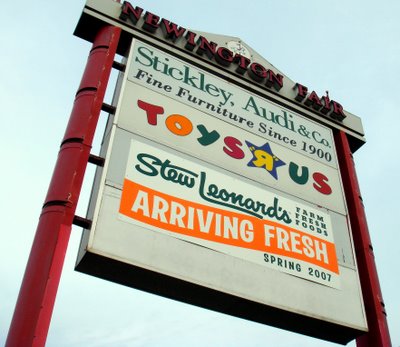 Announced earlier this year, the former Caldor, most recently over a half-decade vacant, used for spare storage for eldest surviving plaza anchor Toys “R” Us, will be transformed and revitalized into something new come first quarter 2007. The Newington Fair, for about seven years, has undoubtably faced troubles scarred with “dead mall” status. But unlike the conventional shopping mall, The Newington Fair, an open-air shopping center, has every opportunity to revive like some malls in such a lessened state have not over the years.

Distinctively located on the sloped Newington town line along the Berlin Turnpike (US-5, CT-15), just over the Berlin line, the Newington Fair has not received the same treatment by patrons like just about every other unnamed but grandly anchored center in being troubled with vacancy for a good number of years. Even when Bradlees, a former Two Guys, located at the crossroads of Routes 173 and the Turnpike itself, departed in lieu of Chapter 11, that plaza faced only short vacancy before behemoth savior Wal-Mart saw an opportunist retail space typically owned by Caldor stores throughout their prime. 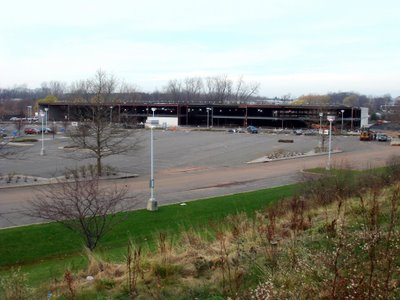 Future Stew's, Former Caldor site today (November 27, 2006).
This could’ve been due to any number of things, at the time, Caldor had faced little competition (pre-Wal-Mart and Target sprawl in Connecticut, of course), with a F&M Drug Store which later became Toys “R” Us in 1996 and Bradlees, located not too far off but not too close for discomfort. The fall of Caldor had little to do with their retail location along the mightly Berlin Turnpike. Or did it? Whether that’s true or not, space for development post Caldor shuttering was not attractive. Six plus years of vacancy might tell some truth to that. But was it the fault of Caldor or the drought of discount department stores to follow in the heavy competition of Wal-Mart and Target, in a later following of slews of closings; Bradlees in 2000, Ames in 2003, and many K-Mart stores (the Sears merger saved that one), which planned, but never had a Newington store .

The plaza itself was designed with a bizarre broken-island set-up that would hope to accommodate the bigger parcels against the off-kilter, sloped placement of this particular area of the ‘Pike. With the worry of being on the outskirts of retail stardom along the Turnpike, the plaza also faced an appearent visibility problem, located within something of a cavity far below the roads, one of which other big boxers like Lechmere had no problem with, located right in the central of retail epicenter along the Berlin Turnpike. 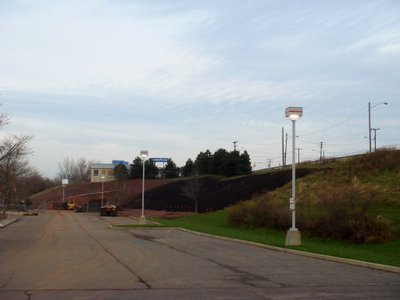 Strange development: Stew's paves the hillside (November 27, 2006).
Newington Fair was also a dire setting for smaller stores like ones found in the Lechmere plaza and nearby Ames plaza next door difficult to live here. The center was clearly not designed with flexibility or organized strip-mall format in mind without major development as an option for the smaller tenants, as the center originally catered to the grandiose Heartland Drug and F&M Drug Store. The space was suitable for the bigger players, the later bloomers, a suitable space for Caldor to expand. Service Merchandise, which entered after Heartland closed, closed itself in 2002 with the company but was snatched quickly by another, albeit upscale, furniture outlet Stickley, Audi & Co. To put it in layman’s terms, everyone just wanted their own store and their own space. A design or decision; both of which cost the Newington Fair and cursed it for a long time. 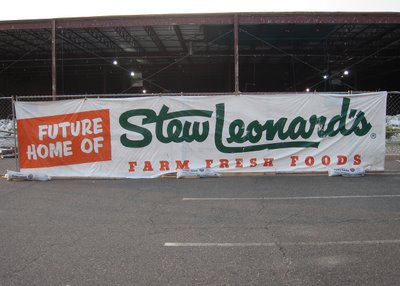 Now, it seems to have struck a turning point. Earlier this year, Stew Leonard’s announced they wanted the former, well-preserved Caldor husk for their latest “Fresh Farm Market” store. Shortly after, Sam’s Club, located right over the Berlin line, in the Home Depot plaza, announced they were going to partner up with Stew’s plan to revitalize the once barely breathing Newington Fair. 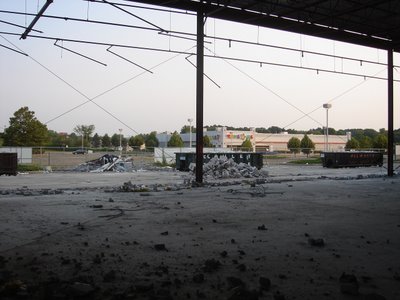 Inside the post-apocalypse Caldor, looking across to Toys "R" Us.
Not everything like this happens everyday; the Newington Fair, with it’s up’s and down’s, will most likely be able to share success once again becoming a power center and leave a mostly troubled 1990’s behind. Over the last year, I’ve made it a project to track the slow demise of Connecticut’s last former Caldor building. Luckilly, the final days were captured even if the entire site has been on a progressive slump all Summer with little visible progress today.

Stew Leonards will completed within the first quarter of 2007 as Sam's Club will be completed by third quarter. 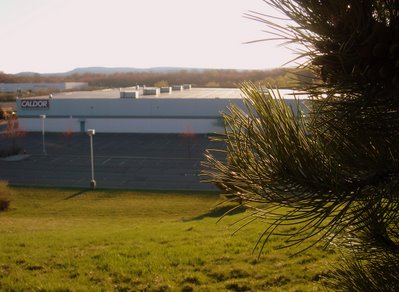