A Look Back At "Pavilions at" Buckland Hills

One of our readers, Joseph Rifkin, sent me an email with a few attached images one of Connecticut's newer shopping malls: Buckland Hills. Curious about the history of the nearing 20 year old mall, he brought light to some "vintage" images that certainly bring back some memories of a mall I frequented aplenty. 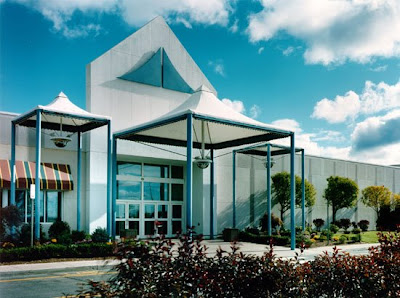 "The Pavilions at Buckland Hills" as it was originally known by opened in March 1990, and has since renamed to "The Shoppes at Buckland Hills" following an extensive decorative renovation shortly after the mall's tenth year, largely in retaliation to a fledgling outdoor center (who stuffs more fluff words than usual to boost its cache) built on the South Windsor line which later threatened its precurosy to a "faux-main streetscape" trend in the neo-mall landscape to which it later joined in image with a post-millennial remodel. 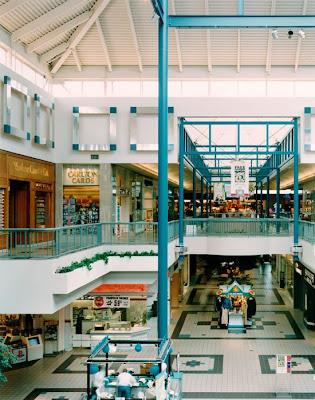 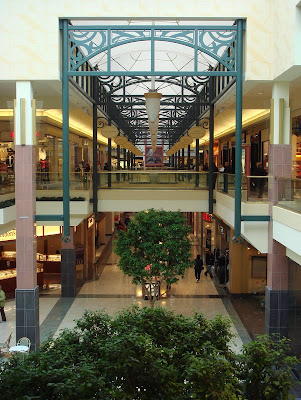 A VIEW FROM "THE SHOPPES" ERA, AFTER THE RENOVATION

Many might not know the full history of what's now one the dominant aerial malls that has been tagged for its crippling and devastating of many surrounding centers including one rotting away ghost town plaza on the other end of town, East Brook Mall in Willimantic, Enfield Square in Enfield and even Auburn Mall in Auburn, Mass. right up on I-90, and shortly over the Connecticut line (sorry, I blame the awful I-90 access and annoying Pike tolls to skim the surface of this mall's troubles).

After the development and opening of Crystal Mall in Waterford in 1984, one year later talk rose of another mammoth mall project and pseudonymed "Winchester Mall", proposed on the (South) Windsor and Manchester lines, on a plot of endless farm land on the outskirts of the towns. The folks turned it down, holding it up for years, until it was given the green light in the late 80's. At this time, the closest thing to what was soon to become a new mall was the Caldor-anchored "Burr Corner" plaza, constructed in the mid-1960's, polar to the once thriving outdoor Manchester Parkade near the center of town.

By the early 90's, The two-level Winchester Mall project bloomed (no, exploded) into The Pavillions at Buckland Hills.

How the fates have turned -- in just ten years the "Buckland Hills", comprable to farmland as far as the eye can see has become what's known as the explosion of Americana emporimania, squashing the town's slogan "A City of Village Charm". Soon after the advent of the two-level toppler to the surrounding malls, plaza after plaza popped up around it, including the big blue monster Walmart, who sprung up with its first, albeit humbly-sized Connecticut location in 1993 (which is coincidentally slated to close up soon and move down the street for, you guessed it, a larger complex). 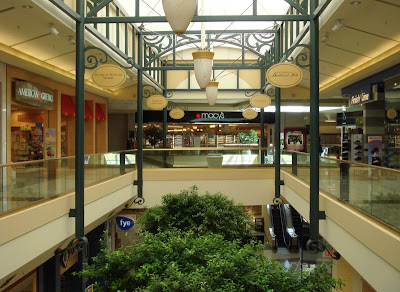 While I still frequent Buckland Hills today, I've watched it grow and change throughout the years and it doesn't share the same zeal as it did back then despite it being more grandiose than ever. Anchors including G. Fox eventually became Filene's a few short years later (then Macy's), and SEARS and JCPenney are still there (exteriorly unchanged, of course). Steiger's, D&L are but memories while Dick's Sporting Goods opened one of its premiere outlets at Buckland, additionally was one of the first to have remodeled drastically from an original wood-floor clad, cramped albeit two-level interior.

The overall temperature of the mall was ho-hum darker shades of blue and monochromes, often attracted unsavory crowds at night (got a few stories to back that up), but the offerings were different from what Westfarms had.

'The Pavilions' couldn't capture a 90's mall any better than it did.

Today's upscale image has done it over well cosmetically, and has taken a sharp turn from what it once was especially in its later years adopting a rattier image. In spite of its original design provincialism, Buckland Hills was considerably the fun mall compared to Westfarms.

Distinctively, its developers made it top of the line for a 90's trendy center: a food court, alien to many malls around this time with all the quick-bite junk food trimmings like Panda Express, McDonalds, Taco Bell, Sbarro, and more mid-range stores instead of Westfarms somewhat highbrow offerings. Time-Out videogame arcade couped up in the rear of the food court, which centered itself around my childhood experiences here especially with it being a selling point for my mom dragging me here originally.

Buckland Hills, the more community-based mall on steroids, had its charm and challenged shoppers to all new destination.

Today the arcade, Panda Express and Sbarro "wall" have gone the way of the dodo, completely demolished for a carousel, the food court has been rearranged (Burger King took over McDonald's space) but still has an exorbitant amount of unused seating, and the decor has gone much classier. Some of the offerings have dipped into the "discount" and ordinary realms, gaps are evident from fallen retailers which thrived into the 1990's -- KB Toys having closed up last year, Suncoast now taken over by the always exciting indie Cambridge, Mass.-based Newbury Comics and its first Connecticut shop, and a furniture store operating out of a years departed Sam Goody and recently a hole left by The Disney Store -- whose been with the mall since the very beginning no more.

These shots are property of the mall's original contractor, Fusco Corporation. We're not sure how far they date back to but they mine as well be dated 1990. Also check out this shopping bag from Fox N Allen's collection. The mall once had kiosks which sold these custom logo-printed handlebags for a quarter (or two?) -- I used to have a ton of these.

If you've got any memories (or better yet, photos) shopping here in the 90's, perhaps ones that have eluded my recollection, share them with us!

See also: Labelscar's piece on The Buckland Hills (disclaimer: author Damas' visited the mall "in progress" of final touches on the remodel).
Posted by Nicholas M. DiMaio at 11:15 AM 12 comments: