The corporates at Kmart have seen the wave of the future -- all around it. From the designer-chich, hip Target to a sun-shinier, new "Walmart," who recently unearthed what's been identified as a "sunburst" logo, it's time for the decades sinking department discounter to step up and show some competitive edge -- this time it could be for real. 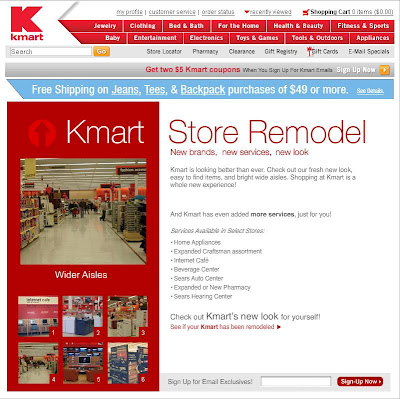 (Re)introducing "Kmart Store Remodels," a little tab on their webpage which promises customers an all-new shopping experience with various neo-lifestyle amenities to assure its customer base they can still be cool and hip. All-new and Kmart? Its hard to believe, especially with the reputation the chain has dragged along today across the nation with many of its notoriously yesteryear-looking stores disorganized, somewhat dilapidated, cosmetically challenged and decoratively dated by decades plus. Some stores even suffer with various unappealing and often reminiscent odors of diseased retailers still lurking down the aisles.

As Donald Fagen of Steely Dan said in "The Last Mall"; "roll your cart back up the aisle!"

Say hello to the in of internet cafes (out with darkened Little Caesar's corners), brighter colors (lots of red but will they keep the olive green, brown and tan linoleum tiles?), an expanded Craftsman section (which will likely take over the vacated Martha Stewart acreage) and possibly the biggest surprise of them all: the return of the auto center -- with Sears nameplate attached.

This could mean, soon, you won't have to stare at the eyesore, abandoned garage yards otherwise used to stockpile disused gondolas, garden equipment at the sides of your Kmart stores anymore thanks to Sears...

If you didn't know better, or had a "Sears Essentials/Grand" unrolled in your town to mask over a distressed, underperforming Kmart store in the last couple years since the infamous merger, you're going to see what's looking like a glorified Sears-Kmart discount store concept -- all over again.

Since over the course of the 90's, Kmart has been searching grand for the perfect image ever since they unveiled their iconic red-and-green "K mart" face in the early 60's. They've tried so hard since, in fact, they suffer from an identity crisis with today's generation. Unable to settle with anything firmly distinct beyond the somewhat flopped, tacky "Big K" movement, the company has struggled more than any other major discounter since with concepts to move its look towards a confident look for the chain. After over a decade, the chain has attempted to dump the Big K moniker despite the storefront logos, move back to the classic "kmart" (all lowercase), and wants nothing more than simplicity -- like its ever-expanding rivals Walmart and Target, who've spun Kmart off its once domineering position since.

The two-level Southbury store, located at the town's I-84 exit will be the lone ranger to get the grade-up treatment -- leaving the remainders in the state who could much use the remodel to its advantage.

The Southbury store, which is the furthest advanced store in Connecticut in contrast (just to be fair) to the nearby towns Waterbury, whose early 1970's canopy look dates it beyond a monochrome paint job but not nearly to that of an age-old Straits Turnpike, Watertown location which retains its original 1976 red-and-green logo still plastered onto the old Grants building it replaced oh so many years ago. Apart from its marvelous time traveled look that might otherwise appeal to retail history enthusiasts or make your grandma feel at ease, the company will be favoring stores that clearly have bold futures instead of the ones that really need it.

With deep financial pressures hard to escape in the face of the merged Kmart-Sears, a very troubled spending economy with many prominent chains purging this year alone, the parent sees the need to make or break. Sears itself isn't peachy either but instead of closing locations or initiating a kaput of the entire Kmart label all together as urged by 'financial experts,' having their shot at reviving a faltering company in twilight -- is in the works. for yet another round.

If you haven't, you really need to see Pleasant Family Shopping and their various segments on Kmart with full-color vintage photography.
Posted by Nicholas M. DiMaio at 2:35 PM 8 comments: