Hey kids! Toys "R" Us is coming to a town near you -- if you live in/around North Haven.
NORTH HAVEN, C.T. -- That's right, the iconic giraffe-toned mega toy retailer is planning a new Toys "R" Us-Babies "R" Us combo at the forthcoming North Haven Commons shopping center along the fledgling Universal Drive shopping district adjacent the I-91 corridor to I-95.

Developer Ripco, whose crafted the siteplan for the under construction North Haven Commons also includes a few new entrants including Best Buy, Petco, and an unleased parcel as major anchors amongst others. 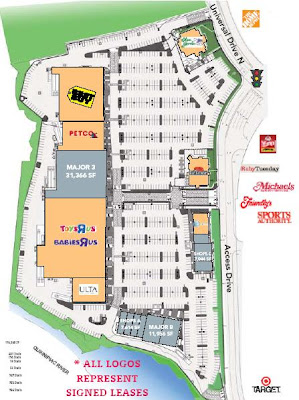 Toys "R" Us-Babies "R" Us in North Haven will be the chain's newest in over ten years for Connecticut and the first newly-built since one built from a relocated Waterbury location in 1997, at the Brass Mill Commons. Both stores shared the peak of the company's image; Waterbury was the state's first "Concept 2000" and North Haven will be the first combination store crafted in the company's bolder image.

In accordance with the company's plan, many existing Toys "R" Us stores, most of which who haven't received any significant remodels in over 15+ years, have since undergone a campaign to reformat under the guise of CEO Storch and his fresh marketing campaign with hopes to rebound the once dominant toy retailer to suit a branding combination following the success of the chain's sister Babies "R" Us brand. 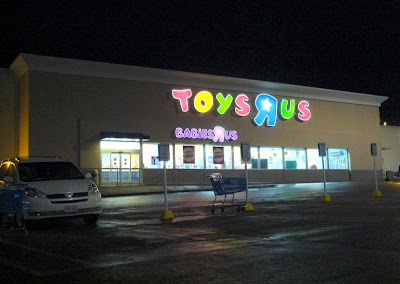 Some stores which have already reformatted into the hybrid type which includes Toys "R" Us and Babies "R" Us stores under one roof, including one "left behind" location we once planned to visit in York, PA (but got there too late), Salisbury, MD and Auburn, MA (pictured above).

Other long-time stores as well as new ones currently up for the transformation include a veteran location in Manchester, NH, which is currently enduring its third remodel since its 1982 opening into a hybrid location.

The Caldor Rainbow has since swooped up a couple locations in Ohio; one wonderfully preserved store in Boardman-Youngstown and a white-clad repaint in St. Clairsville, both still largely time-warped, still shadowing the chain's iconic look from the 80's with brown ripple-roofs and multi-colored striped exteriors like one we've tirelessly promoted here in the past in Clay, N.Y.

Though no stores have made the current generation remodel in Connecticut, changes are expected to make their play inevitably. The market has been golden for the chain in our state, who saw little to no closures since the chain entered the Connecticut market. Apart from a bygone East Haven location, a relocated Waterbury one and one such in Westport, which closed earlier this year, will likely rebound with the coming of the new North Haven store -- with the possibility of a 12-year old Hamden location getting the ax.

The Hamden Mart, which houses the county's other Toys "R" Us came about in 1996 when Stop & Shop moved out of the plaza. Rumors persist the chain's strategy includes a future with the North Haven store making the forefront, leaving the the Dixwell Ave. location to not renew its lease.

Toys "R" Us currently has 9 locations in Connecticut, Babies "R" Us has 5 all standalone locations making the North Haven store a first in the state as well as becoming the state's tenth location, replacing the late Westport store.

If you haven't already, please check out our in-depth case study of classic stores and Pleasant Family Shopping for an incredible full-color shot of an early 1970s shot of the beloved rainbow-striped glee the chain is classically known for.
Posted by Nicholas M. DiMaio at 5:00 PM 13 comments: