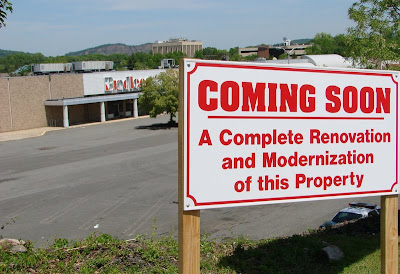 "Coming Soon -- A Complete Renovation and Modernization of this Property"

...greeted The Caldor Rainbow upon its recent visitation to one of New York's earliest Bradlees sites in New City (not New York City), which has remained vacant for over seven years since the chain's closure.
NEW CITY, N.Y. -- With half the ghostly "Bradlees" building side logo in tatters, peaking behind florishing trees from the road, the elderly and dilapidated "Mini City" plaza site on the North Main Street-Cavalry Road split apparently has a plan for the future. A nearly forty-year, former Stop & Shop Companies relic hopes to seek new tenants and a new life after its neigh decade of vacancy and ages of age. 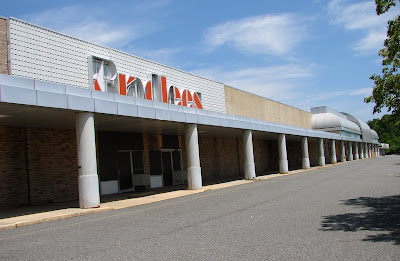 Bradlees, the New London, Conn. discount department store chain quickly expanded under the banner of the Stop & Shop Companies in the early 60's with a progressive expansion plan shortly after, opening one of its first New York state outlets in New City back in the mid-1960's, apart of a "Mini-City" with Bradlees, Stop & Shop and Medi-Mart. Sharing success for many years, the plaza fell on hard times when the bond ended in the early 1990's, but even deeper as the decade went on. 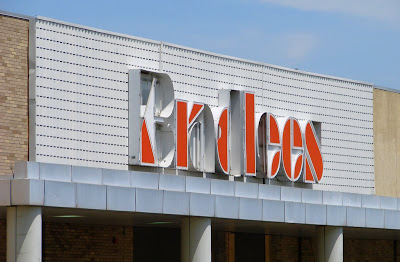 Bradlees shared a good level of success in the state of New York, with its earliest sites in Poughkeepsie and New City with one of its last vacant sites in southern-tier Elmira-Horseheads formerly anchoring at the Arnot Mall.

Today, the New City site is only half-diseased. still hanging in there as a well-known town blight. 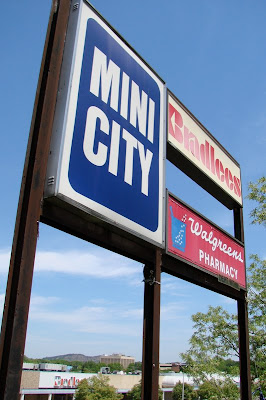 A former Bradlees, sitting silently, boarded-up against a caramel-toned brick and signature early rockface facade since the liquidations in early 2001 following the chain's December 2000 closure. The encompassing "Mini-City" site, now a mere ghost of its original self is a lot now used for vacationing truckers, breaking construction workers at the outparcel, nearby McDonald's, and patronage to an outdated Walgreens on the far-side of the plaza. Its largest tenants sit rotting away in addition to the long-fallen discounter including a neighboring, long departed Stop & Shop which has become home to a future supermarket before its label-scarred vacancy.

News last year came about with Stop & Shop purchasing the lot to build a new store -- but almost one year later, nothing has happened. Town talk has hopes to build an entirely refaced plaza, complete with landscaping and total facade renovation. 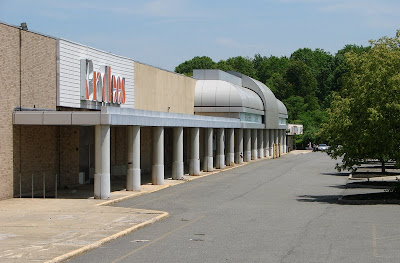 The Mini-City site, like many others built around this time, began in the mid-1960's under the banner of the Stop & Shop Companies: with (left-to-right) Bradlees, Stop & Shop and Medi-Mart. With Bradlees lasting until the final days in 2001, Stop & Shop had left earlier following the divorce of 'The Companies,' while Medi-Mart was sold off to Walgreens in the late 80's.

Nearly forty-years later, the fate is still blurred, but not without hope to start anew. 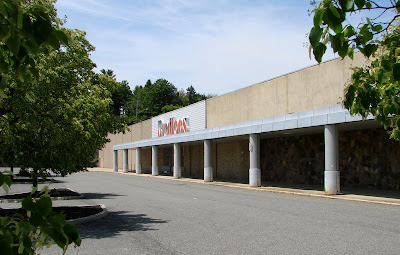 Enjoy our pictures on a beauitful late May afternoon. It may be some of the last shots you see here of Bradlees in New City, thus ending the dead discounter Bradlees' saga in New York as this site edges closer to being revitalized. Luckilly, we were able to avoid a line of questioning when my trusty sidekick picked me up upon the sudden sighting of a local police patrol (bottom right corner of the header photo)!
Currently, there are still a handful of remaining Bradlees in New Jersey including ones in Bordentown, Woodbury, Hazlet and Toms River. The Caldor Rainbow seeks to bring you those updates as the Summer months move along.

For more on The Stop & Shop Companies and "Mini City" sites including outstanding full-color vintage photos of Bradlees in its youth, we urge you to view the excellent Pleasant Family Shopping site, who provides many valuable visuals from their respective eras.

For more info on Bradlees in Connecticut, please visit our Premium Store Locator.