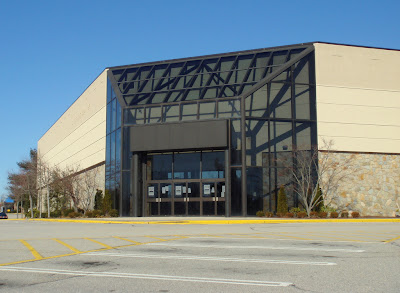 Following a report we picked up from the forums at Ames Fan Club months back, there was a rumor afloat about two new anchors signed on to succeed the fallen Filene's at the SIMON-owned Crystal Mall in Waterford, Conn., which saw closure in late 2006. Our Norwich-based informer, Joseph Rifkin dropped us a note about the two anchors coming and are to be subdivided out of the original double-level Filene's into Bed, Bath & Beyond and Christmas Tree Shops.

The subdivision will likely feature a configuration of upper and lower access, with respective levels for each anchor.

An official statement from SIMON about the plans for the future site(s) of the vacant Filene's remains vague and does not denote when the anchors will be open to the public.

Originally, we at The Caldor Rainbow had disbelieved the possibility of two unusual anchor stores grounding at the Crystal Mall, and a two-level space whose had particular trouble finding anchors to succeed the dark Filene's space. Bed, Bath & Beyond, a chain whose typically located within power centers and strip plazas shares equal scarcity inside indoor shopping malls along with Christmas Tree Shops, who notably has a location in connectivity with Holyoke Mall in Holyoke, Mass. Both retailers follow the tradition of unique anchor offerings at Crystal Mall from Filene's to Jordan Marsh with both not located inside any other mall in the state and elsewhere.

We all know the story: Federated Department Stores, since become Macy's, Inc., shuttered the Filene's location in 2006 following the controversial, unpopular "Macy's" rebranding campaign which took place in finality September 2006. The company decided to focus on its other Macy's store as the prime successor, which had become Macy's from the now defunct Jordan Marsh chain in 1996. 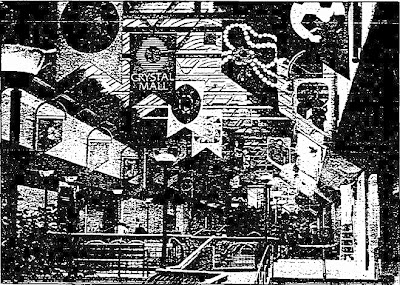 Filene's at the Crystal Mall was not only an original, but the premiere, flagship location for the now fallen Boston-based company which opened its first Connecticut store to coincide with the mall's 1984 opening. The name eventually became ubiquitous, storming the Connecticut mall scene when the Hartford-based G. Fox succumbed to Federated and all stores converted. The Waterford store, renovated very little throughout the years had shown true on the now darkly-set, vintage respective-era woodplanked and rockfaced art deco-inspired interior entrances, while an exterior facade had gone through a refurbishment to do away with most of the weathering and deterioration shortly before the store was shuttered.

The store, once sharing exclusivity, was also well known for having never reformatted to the thin-typed logo the Filene's chain took on in 1993 when its corporate parent May Company merged with Federated, keeping the 70's-era, deco-inspired typeface all the way up until its 2006 closing.

The Caldor Rainbow visited and pictorally detailed the Crystal Mall in January 2007.
Posted by Nicholas M. DiMaio at 1:08 AM 4 comments: