Westport Toys 'R' Us To Close End of January 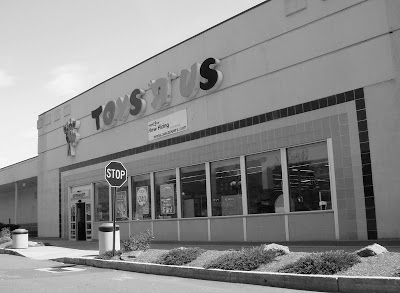 One of our readers and Connecticut resident, George Ligouri, drove up to the Route 1 strip mall location along Post Road East in Westport upon a late December day and was baffled upon finding "20-40% store closing" signage which greeted him upon a unsuspecting lunch break. Store associates informed just one of many sad, long-time customers of the store's month-to-live, citing its terminal stage.

Remaining stock that won't be sold off in the various markdowns will likely be exported to sister stores. Closure cites no other reason than what appears to have been a struggling, underperforming store.

The Westport store which opened in 1992, succeeded a fallen Child World, a once rival toy retailer who dominated the market long before Toys 'R' Us stole the thunder throughout the 1980's, expanding rapidly into the 1990's with its own large selection of high-quality brand-name toys and games.

Child World declared its closure in 1992, selling off most of its assets and locations, some of which in many states became future sites of Toys 'R' Us shortly after.

The Caldor Rainbow believes the company had planned to shutter the Westport store months prior the post-Holiday shopping season announcement, springing the news on December 26 and after a season of frenzied Christmas shopping -- an otherwise popular time to announce store closures without hindering the shopping season.

Uncertainy in unsafe toys and recalls have lead (pardon the pun) the defeat of toy sales this year apart trends dictating a sad, sorry end to strictly-based toy retailers. Fellow toy retailer K-B Toys is believed to also be at its wit's end, which had plans shutter a bulk of the company's stores months before the holiday shopping foray.

The Westport store, which followed in a hardship of being within a misplaced setting, distant from a major shopping mall, countered conventional company strategy of placing stores within thriving near-mall markets. Apart the company's own woes, to which it has been suffering for a good decade, the Westport store hadn't an adjacent Babies 'R' Us, which is otherwise the company's profiteer these days.

There's been no word on any other stores slated to join in closure. The Norwalk location, also no neighbor to any malls and located along US-1, continue to remain open along the state's other 7 locations in West Hartford, Waterford, Waterbury, Danbury, Manchester, Milford, Newington and Hamden.

Historically, the Toys 'R' Us chain has had a successful run in Connecticut, with most stores kept well in accordance with remodeling efforts. Having only ever closed one store, East Haven and one relocated in Waterbury, the company prides Connecticut as a continually healthy market for the company.

East Haven, doomed from the start, operated out of a former Stop & Shop, marred by its troublesome, "sinking" land was eventually forced to close in 2002. The late East Haven store was reportedly one of the company's most notoriously troubled locations for its being located along the often hectic Frontage Road. The location has since been razed and bolstered for a CarMax used car emporium in 2006.

Waterbury, which was home to the state's first store opening in 1980, closed its longtime original Wolcott Street location in 1998 at the fallout of the Naugatuck Valley Mall and relocated following the opening of the new Brass Mill Center, relocating to the Brass Mill Commons strip plaza, adjacent the new mall. Waterbury, aside being the state's premiere location, was rewarded with the state's first "Concept 2000" model, which prompted many others around it soon follow.

Will more closings ensue? Following a mass closure which saw an end to 87 stores statewide in January 2006, the company has been keeping its remaining 586 U.S. locations vital since. Connecticut was one of the rare, few states that hadn't suffered any closures.

The company's CEO, Jerry Storch hopes to revive a staggering company. You saw some of what's in store for Toys 'R' Us following a new marketing campaign unveiled this past Fall/Autumn, but Storch has a plan beyond ads and an aspiration to bond Toys 'R' Us and Babies 'R' Us stores (like the former Toys 'R' Us and Kids 'R' Us joining) into one and like a few already displayed in Auburn, Mass. and Johnson City, N.Y. You can read up on that recent story on ABCNews.com.
Posted by Nicholas M. DiMaio at 4:25 PM 9 comments: