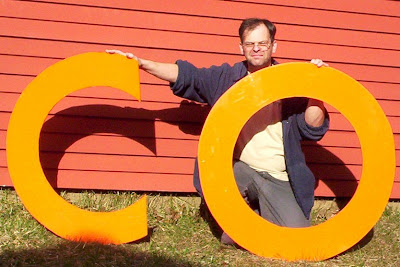 JIM PRESENTS HIS MOST PRIZED SALVAGE FROM THE NEW BRITAIN CALDOR: The 'C' and 'O' spells CALDOR.

Back in March, we presented a slew of wondrous photographs from the personal collection of a former Caldor employee, Jim. Jim or "Jimmy," was a long-time employee at the late New Britain location who often took photographs (that's right, film, ladies and gents) of the store in-and-out over the course of a decade plus.
Following a story (which seems like history now) that ran in our local newspaper, The Hartford Courant, Jim had contacted me via email about a girth of photos and memorabilia he carried on with him throughout the years as a Caldor employee.

These "time capsules" are one of my proudest offerings for the site seeing as my inspiration for was built upon the late rainbow-icon discount store Caldor, but specifically the bygone location on Farmington Avenue in New Britain. One of my goals with the site when I began, was to do whatever I could to find tangable evidence of this very store and others.

Because of Jim's personal photos, he's helped visually remember the store in ways I myself had not due to often spotty details of memory and its fallacies.

On Jim's final day of work, he recounted to me how it was one of the most horrifying days of his career at the New Britain Caldor -- as parts of the plexiglas lettering came falling down from the withering, old stucco and rockface facade that seemed cutting-edge back in 1972 and as the chain's 21st store for the 21st Anniversary.

They, like most of the store's remains in 1999 went to the landfill. Except for a few morsels Jim has kept them snugly in his garage for all those years: the 'C' and the 'O', wonderfully preserved in their burnt-orange goodness. 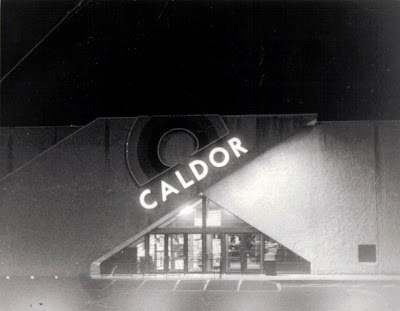 NEW BRITAIN CALDOR; SEPTEMBER 1991: AFTER CLOSURE ON A COOL NIGHT WITH IT'S LETTERING SHINING BRIGHT.

This sign, another iteration of the well-known "rainbow" motif, was the second one used on this store, likely replaced from the original one sometime during the 1980's.

All photos are the respective property of Jim and were given permission to use on The Caldor Rainbow only. As with all of Jim's photos, do not reproduce or share on any other website.
Posted by Nicholas M. DiMaio at 1:30 AM 8 comments: