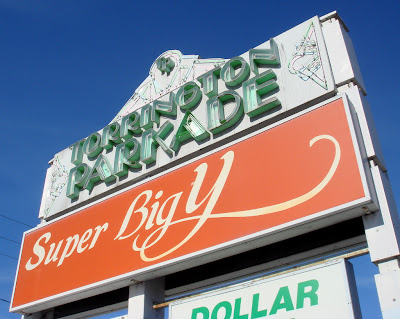 516 Winsted Road has been silent for years.

Ever since Ames closed all it's stores in 2002, the bizarre, three-scaffold complex with all sorts of off-colorings, possibly sealed showroom windows will soon be no more. The otherwise vital remains beside it, anchored by a Big Y Supermarket (complete with outdated "Super Big Y" road pylon) continues to see plenty of shoppers while the other side largely does not. But developers have drafted a plan to make the decades antiquated plaza, one of the town's eldest, under renovated retail sites, a future site for a more vital retail to truck along with far-off times most of the town is steeped in. Anyone who's driven down Winsted Road knows of the flair of the antique, neon-lit Torrington Parkade road sign, which has been there since the 1960's and shows it's age well in 2007. 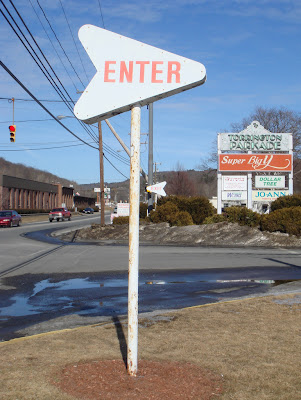 Torrington is a town that's fascinated me for a while now. It's certainly an out of the way town, located in the Northwest portions of Connecticut near similar, further north town Winsted. The city itself is well known for its vastly antique, industiral working-class landscape with much of it's retail offerings in an interesting, equally time-ravaged position. As far as their retail goes, there's a lot of history within. The central area of Torrington, outside the CT-4 and US-202 influences of Price Chopper, Wal-Mart, and BJ's Wholesale Club, is also home to one of Connecticut's few surviving, vital "Big K-Mart" stores, an outpacel JCPenney within a blown-clad Super Stop & Shop plaza, but most of all The Torrington Parkade. 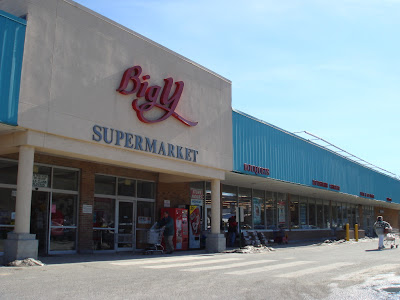 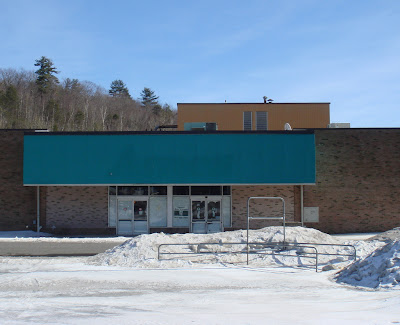 The Torrington Parkade contained two anchors beginning in 1968 with Sears and an outpacel Sears Automotive Center. Sears moved out a few short years later selling its store (likely for one at the Naugatuck Valley Mall), selling the site to discount department store, Caldor. After extensive renovations, the chain opened the store on October 1, 1971.

On the other side, the plaza was anchored by Super Big Y. When Caldor when out of business in 1999, a not-too-long succeeding discounter, Ames took over the location for a few years in their scheme to occupy a bulk of fallen Caldor locations which helped sink an overzealous retailer. Ever since then, the parcel on the furthest end of Torrington Parkade has been vacant, unable to attract even an Ocean State Job Lot into the space. But now, there appears to be a future for the fallen site, and a plan that might have some Torrington residents cringe. 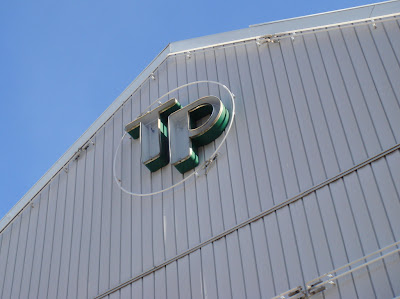 Eventually, it was once said Lowe's Home Improvement was to occupy the space left by Ames to enter the Torrington market. Now it appears their agenda has gone fourth and will see to have the Torrington Parkade, as it's been known for many decades, to soon be no more. Having drafted a revitalization plan; Lowe's has negotiated to demolish the entire Parkade site, beginning with a phased repositioning of the entire plaza which will result a newly-renovated, relocated Big Y on the site of a soon-to-be-demolished Ames; which will take place before Lowe's begins it's own construction on the current Big Y property. Big Y of Torrington renovated in early 1990's dropping the "Super" addage to the building's frontal identities, while still existant on other portions, has not since updated much as it's seen other stores in the state expand and renovate. 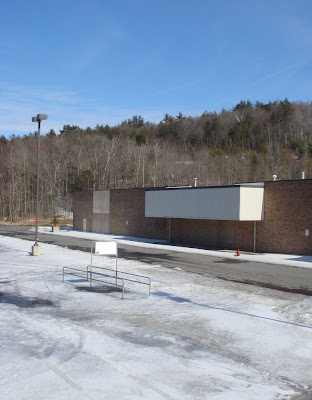 A mysterious former anchor store occupied by Caldor in its prime; could it have possibly been subdivided into three at one point? 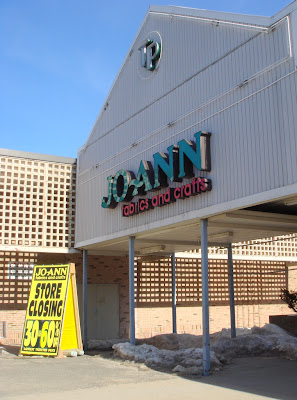 As a result of the draft, remaining smaller stores inbetween the anchor placements, and even those within a dilapidated miniature faux mall scape between the anchors feature quad-bench seating, otherwise distressed concrete planters, and home to much graffiti as well. These stores, including a Radio Shack, who has their old company signage around back of the store, now have an ultimatum; close or move elsewhere. Unable to determine the fate of the current smaller parcels, two locations, Jo-Ann Fabrics and Burger King outparcel among a few other dark storefronts have complied to close their stores with any certain plans to open elsewhere in town. There aren't any plans yet to include the once strip offerings in the proposal. 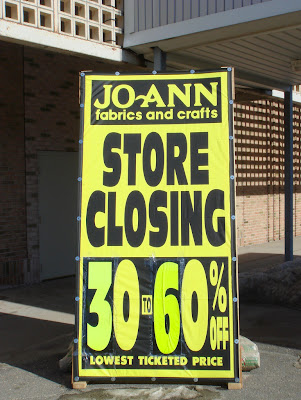 Jo-Ann Fabrics is wooing shoppers with rising store closure sales and informing them to shop their nearby Waterbury store. Jo-Ann, who's only occupied the space formerly occupied by the fallen House of Fabrics has seen a short-lived term in Torrington. Everything Must Go! 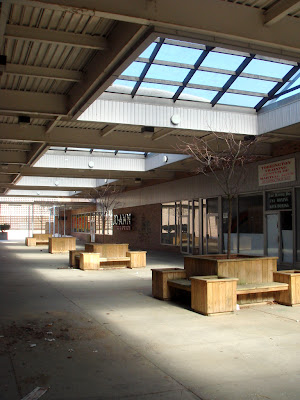 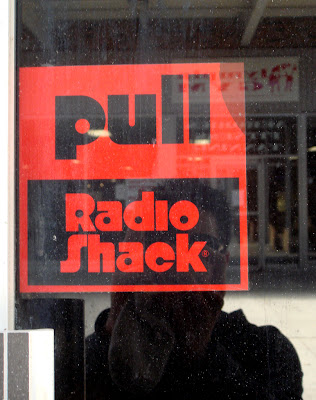 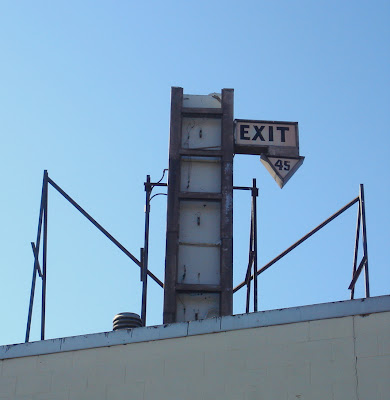 Behind the site is but another story; lots of dilapidated, forgotten but noteworthy leftovers from the plaza's earliest days including this since dismantled "Exit 45" signage where the former tenant displayed it's advertisment. 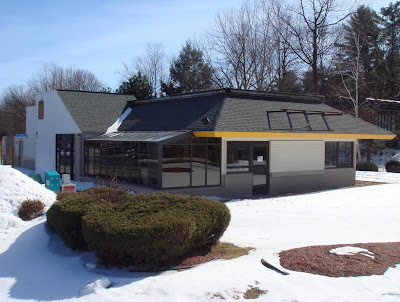 The franchise-operated Burger King, who recently had two locations in town; East Main Street and the now departed Parkade site on Winsted Road sought to close in lieu of Lowe's proposal. Unlike Roy Rogers, Burger King is not exactly downsizing, but it seems they have no plans to reopen a store elsewhere in town. Like a recently abandoned Roy Rogers in Newington, Burger King had been reported mysteriously vacated without warning. 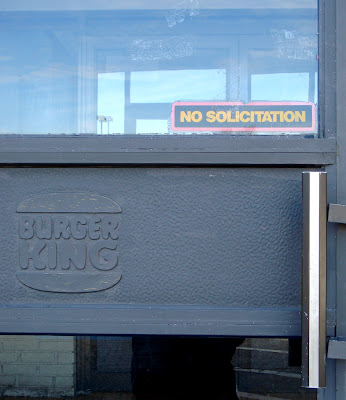 Unlike most Burger King locations around the state, this particular one had much of the early decor most chains have updated since; wooden-trims and draped seating, wooden warehouse-style ceilings, brown and tad clad tiles, and even the company's 1970's-era logo on the doors which was phased out widely in the late 1980s. 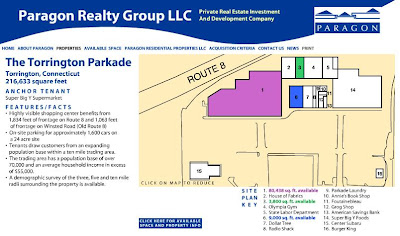 The current realtors of the Torrington Parkade, Paragon Realty Group, like the site itself, has not updated their website lately, seemingly since the closure of Caldor in 1999. The plaza doesn't seem to have changed much since its origins, presumably the 1960's. Do you remember what the Parkade was like before? Judging by it's tired appearence today, it couldn't have changed too much since.

The future adaption for the site seems to follow this schedule; the first phase would see to demolish the vacant Ames, build the new Big Y in its place, demolish the current Big Y, and then Lowe's will begin its construction. A deal with the operating strip stores hasn't been determined; relocation or closure?