Toys 'R' Us Regresses To Childhood? 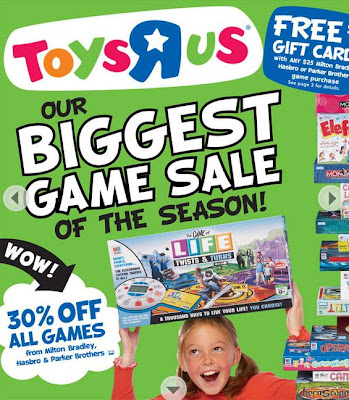 LOOK MA! A NEW LOGO, CHILDREN AND EMPHASIS ON BOARD GAMES DINOSAURS USED TO PLAY NOW AT TOYS "R" US ONCE AGAIN.

Here I am doing a vicious uphill exercise on the treadmill at Planet Fitness when I glance over at one of the line of TV's and in surprise, I see an ad that catches eye. It's from the (once) beloved Toys "R" Us corporation, showing off their stuff in a new advert. Since I don't watch much television at home, I couldn't have possibly reported this any some odd week later when it unveiled itself. I usually end up getting my hodgepodge of idiot box entertainment whenever I'm not - and with an array of channels simultaneously flanking your periphery, you're bound to see something whilst shielding my eyes and preserving my respectability from an otherwise obnoxious vacuum of crapola i.e. VH1, MTV, et. al (you know, Cable).

In the ad, kids were *gasp* playing with toys! You know, like when kids played with toys back in 1985 and not gizmos like iPods and laptop computers. In the lower corner of the screen, the secret revealed itself: "toysrus.com." Huh? At the end of the spot, a new logo is revealed and out pops a classic-looking Jeoffrey, like one such you might remember from your childhood given you were born in, at least, the late 1980's.

Has the disease known as "Concept 2000" been cured, salvaging what it could after its warpath of lobotomy that helped destroy the chain into all the periwinkle-tones it is now!?

Toys "R" Us has a newer, simpler, jovial logo that refuses to stay in line like those logos of past days. While keeping the trademarked backwards 'R', they've retired the original yellow and canned the quotes around it. At the end of the spot, Jeoffrey pops up from the middle of the iconic 'R'.

Shockingly, it reminds this child of the 1980's that the chain might have finally realized all the dement it's caused upon itself, and reverted right back to it's humble, rainbow-striped motif roots? Not quite. Do you remember when ol' Jeoffrey had a long, long neck, you know, like the giraffe is known to have back in the early 80's?

Throw a striped jacket in there, and you could have made my year.

Roughly twenty years ago, Toys "R" Us had stores that looked very much like one we've attempted to 'celebritize' here in the past on the Caldor Rainbow in both Clay and Horseheads, New York. By the 1990's, the company reworked the image of the chain for the first time, largely abandoning a double-decade worth of brown-draped cultural infatuation for a newer, trendier, opposite dark colors. It came at a price though, Jeoffrey's building-front, Plexiglas imagery 'downscaled', specifically cutting his neck right off to conserve "space." From this dreadfully wrong move on, each "era" of marketing sought to further in the disassociation and the super-strike came in the form of a package which hit in 1996 with the advent of "Concept 2000." By now, Jeoffrey was on the decline. Slowly phasing by halfway through the 1996, remodels were catching up to older stores and before we knew it, we were seeing what was happening. Poor Jeoffrey, the beloved mascot of Toys "R" Us was not growing up in tandem with the children.

In our previous exposes on Toys "R" Us, The Caldor Rainbow has brought it firmly to attention of the worldly audience that excluding Jeoffrey is unacceptable to the preservation of the company's lovable, rich heritage. The once prided mascot was being trampled by the pencil-neck decisions of those poorly representing him slowly converting him into a large, doofy, dolt-like figure who employed a somewhat cynical attitude, reflecting that into a living theater of a percentage of today's arguably misdirected youth.

Following a move of regression, Toys "R" Us has at least through advertisement managed to regain some shed of what's been lost ever since they removed rainbow-colored bars from their storefronts. Don't stop there, Toys "R" Us, start ending this ho-hum slump of corporate blandness of cheap and lazy remodeling jobs that's struck your stores like small pox over the past decade plus!
Posted by Nicholas M. DiMaio at 4:34 PM 3 comments: