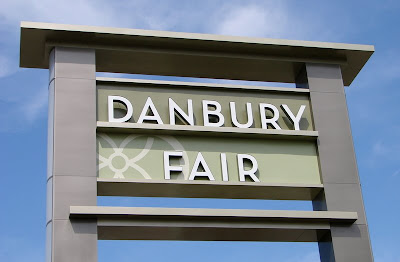 The funky sign, which was erected (shortly after this preview sign) at the opening of the Danbury Fair Mall in late 1986 once stood at the outskirts of Danbury Fair Mall and once conceptual three-level Macy*s area has been removed after twenty plus years of the mall's lifespan. The staple of the two-level regional shopping mall acquired by the Macerich property group in 2001 from its originator, Wilmorite Properties, slated a long overdue remodel on the interior of the aging mall as planned with many of its existing and acquired properties back in mid-2007 which sought to do away with the mall's aged tones of browns and tans. 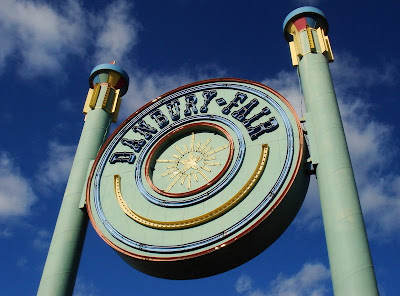 Danbury Fair Mall, built upon the fairgrounds of the once Danbury Fair was modeled after the Danbury Fair with like colors, tent-like architectural mirror inside and other "fairly" reminscent design elements including bulb-lighting stroon about the mall's stretching double corridor's length of shopping terrain. The nexus of the mall's homage, located within the food court, is the carousel, formerly used at the Fair.

In late 2007, developer Macerich announced a major year-plus interior remodel, which sought to do away with much of the mall's aging 80's decor including the mall's olympic-sized (as Labelscar might refer to it as) concourse fountain and stage area. The move, which sought to add an earthtoned vibe to the center also attracted a bevy of new upscale tenants, rumors of a decaying vacant Filene's to find life as Nordstrom's (still unconfirmed) driving some veteran ones out, in order to raise the cliente a la what Taubman has done with Westfarms recently.

Here are some visuals into the new era of Danbury Fair Mall, taken (almost exactly one year ago!) April 2008. For a detailed photographic transition of the Danbury Fair Mall's original look, head over to our Flickr for many photos from 2007, right before the remodel. 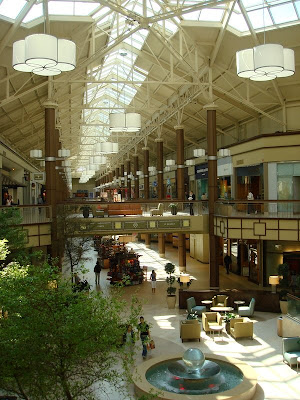 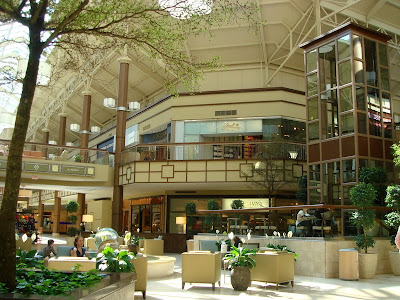 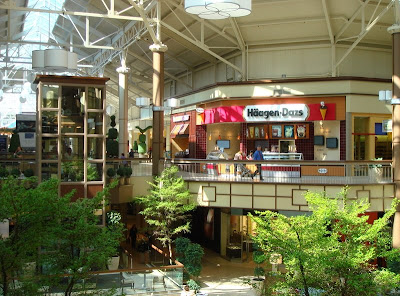 The Caldor Rainbow caught a night glimpse upon a passing on I-84 by in mid-January 2009. Last year, we raised awareness for the mall's management to at least considering saving the historic sign, which by today's standards might not be much but we'd just hate to see any identity with neon flare go away.

We made attempts to contact Macerich for a story we prepared back in December 2007, but never received a response (bureaucracies).

We instead got a cold response upon our arrival to Danbury Fair Mall on March 27, 2009 for our pictures of the new sign.

Shortly after we took our shots, we were greeted by a security SUV who immediately inquired about our camera-toting activities. After a brief, routine exchange of being reprimanded, we complied with the [unwritten] no photography rule and went on our marry way.

But he wasn't done.

The guard, who incited further argumentative fracas didn't care for our failure to explain our motives or the contents of our digital media suddenly ordered an increasingly annoyed yours truly to leave -- no "get out" of the mall's property (followed by him following my car off the property). The guard (who will remain unnamed) tried to explain his reprimand by claiming "private property" universally bans any kind of photography, even if it's open to public invitation. Respectfully, we left but not without a fight.

Next time, if Macerich (or any other private outlet who allows the public for any reason onto its property) has a problem with people snapping leisurely photos on its property, you might want to put up signs or some kind of notice on your website or something before calling your clip-on tie wearing bullies. As a long-time guest of this mall, and one whose taken a bevy of photos here in the past is ashamed of Macerich and it's unprofessional, thuggish staff.

If any of you know when the original sign was taken down, had a similar run-in with security, throw down a comment or two.
Posted by Nicholas M. DiMaio at 12:40 PM 37 comments: