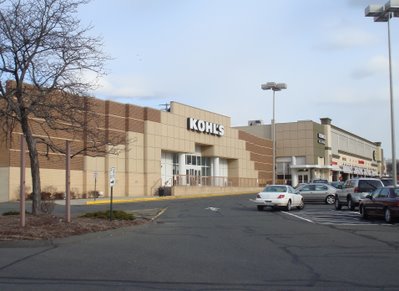 Before the dawn of the smaller enclosed mall era of the late 60's-early 70's, Trumbull was already host to a wealth of shopping centers surrounding it. Most were built in the 1960s with you have now, Westfield-owned regional shopping malls; Connecticut Post and Trumbull. Both were once humble shopping centers a decade before the indoor mall became the commonplace shopping trend. The palette of the consumer knew what it wanted; essential-discounter shops to serve Trumbull's nearby suburbs as well as travellers.

Hawley Lane Mall opened in 1971 anchored with Caldor; a [beloved] department discounter which once dominated the Northeast this side of Wal-Mart and Waldbaum’s; a supermarket comparable to the notoriety of Stop & Shop today. The original line-up served the area with essentialist chains and shops you wouldn’t come to find over at the malls, which in 1971, served a different purpose than it does today. Like the early days before overblown malls, Hawley Lane gave shoppers’ the convenience local residents and travellers what they wanted; the ability to shop with ease within reasonable price range.

Located close to the junction of CT-8 and just off CT-15 (The Merritt Parkway), just minutes from major Interstate 95, Hawley Lane Mall already began with the position to attract a great deal of travellers apart from its local, suburban target. 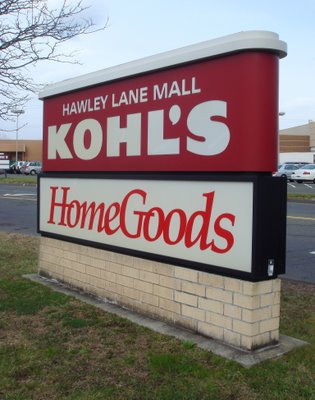 By 1982, Sage-Allen; Hartford-originated clothing store, was added to the mall's upper-level to boost offerings in attempt to challenge a larger, recently expanded Trumbull Shopping Park and its May Company-owned G. Fox which established itself in 1979. Once a fully commissioned office-space atop the mall's shops, there was a new demographic fusing with changing times, poising Sage-Allen to enter Hawley Lane Mall.

Sage-Allen, which didn't quite equal the scale of G. Fox, fit snugly at Hawley Lane Mall and helped put a higher-echelon balance as well as adapt to the changing trends of shoppers; no longer was a trip to the mall a fancy evening on the town but a common hang-out which blended agendas. In doing so, Hawley Lane took a minor jab at Trumbull’s upscale offerings, but didn‘t have the volume or primary objective to compete with a rising regional mall such as Trumbull. When G. Fox purged under the Filene’s uniformed banner, Sage-Allen and all its stores closed for good. After a few years of silence, Steinbach’s took placement... but not for too long.

With a recently expanded Trumbull Shopping Park in 1979, and Connecticut Post Mall (formerly known as Milford Mall) in 1981 relatively close, Hawley Lane did alright before both slowly began to explode into regional shopping malls with various expansions, which advanced beyond Hawley Lane's smaller "strip-indoor mall" demographic.

But the story of Hawley Lane Mall is a good one not heard enough; like so few smaller indoor malls hanging on today, they hit rock bottom before a miraculous rebound.
It all slowly poured on when the clouds moved in over Hawley Lane in the late 90’s, when Connecticut Post Mall (formerly Milford Mall) over in Milford, anchored it’s own, larger Caldor apart its own rival Stop & Shop supermarket anchor coupled with a much more diverse level of shops. There was a clear competitive angle here by Connecticut Post owners, hoping to one-up its property over Hawley Lane. While the trend of regional shopping malls didn't exactly kill this smaller one as, shoppers who were looking for thrills weren't going to spend an evening at Hawley Lane Mall over the other big ones in the area. Ever too quickly, Hawley Lane was struck with end times.

Seeing new management in 1996, New York-based National Realty Development Corp., went ahead to revamp an aging mall from a neglectant former owner with an $8 million renovation plan, hoping to regain some vitality lost over the decades.

Then, to no fault of its new adopters, a wave of defeat swept the mall attacking all three anchors; Caldor shuttered from years long Chapter 11 in 1999, along with Steinbach‘s, followed by Waldbaum’s.

By the end of 1999, Hawley Lane Mall as we knew it, was an anchorless, vacant, dead mall.

Kohl’s, who purchased a bulk of Caldor leases when they went out, positioned itself inside the former discount department store quickly after Caldor fell in 2000. But the discount clothier, which was quickly taking shape in the Northeast following the demise of Caldor couldn't keep the mall fully-functioning alone which furthered in Hawley Lane's empirical troubles.

Suddenly, most of the smaller shops along the mall’s short corridor began to flee without the help of a magnetic assorted anchor history of a Caldor or a constant flow of traffic garnered by Waldbaum's. McDonalds, once housed inside, saw the liability of the mall’s cancerous-sticken vacancy causing it to leave in 2002 in favor of a brand-new, free-standing restaurant located just outparcel the mall grounds.

A good five-plus years with heaping anchor and tenant gaps at Hawley Lane Mall gave it’s owners some time to regroup, and rebound in challenging times.

Then by 2005, the sun came shining through. A rebirth; Hawley Lane was to live again with four new star anchor stores giving host to a new face of retail to the long-dead setting.

A slew of stores, serving to all demographics, signed on to revive the falling apart mall. HomeGoods, a TJ Maxx-style home furnishing-centric discount store, occupied space left by Waldbaum's. Best Buy announced opening a store upper level the mall within the next year, which was the former home to Steinbach's. A deal with Target was struck to build, like most of their stores, in its own property, in the rear of the mall. After a series of zoning and taxpayer battles, Target was given the green light to begin construction while all the other stores were in the process of moving in. 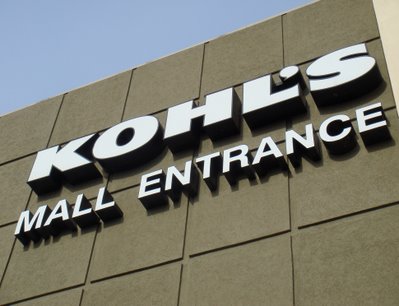 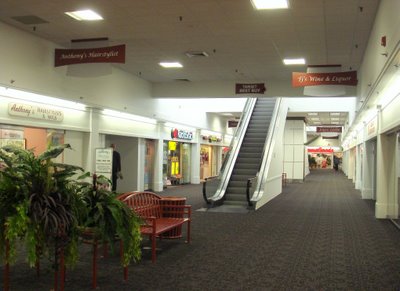 Meet "Gordy", the gentleman emerging from a personnel-only corridor in the left of this shot; known as the friendly mall maintenance inquisitor.

The set-up of the Hawley Lane Mall is relatively simple, no-frills; a typical compact staple-shaped, single corridor with anchors Kohl's (former Caldor) on the far left end while HomeGoods (former Waldbaum's) occupying the opposing end. Each anchor contains its own "mall entrance"; essentially a proximate corridor beside the store, as well as exterior entrance to fulfill the lifestyle element; not asking patrons to even set foot in the indoor portions.
After the renovation, Hawley Lane Mall received a contemporary lavish; a mainly sterilized white-coated interior, carpeted flooring, complete with ceiling-hanging Main Street-esque signage over each parcel, as well as a (Kohl's-esque) block-facade, glass-encased elevator shaft giving access to Best Buy (former Steinbach's) and the remaining office space. Usual asthetics and amenities; planters and wooden benches are set up throughout the mall in idle areas (so you stay, just not too long!). Presumably, not too much has changed from the original set-up, and if you look closely, you'll see some suspected older elements including a rectangular Caldor label scar on the side of Kohl's (not pictured here). 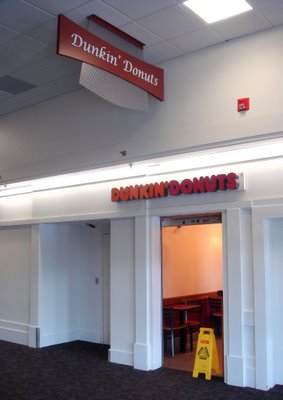 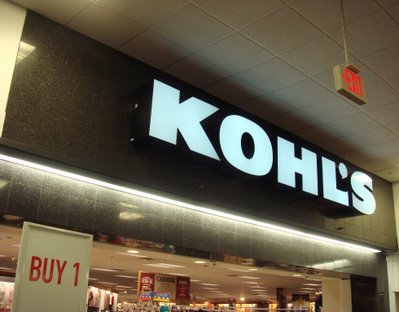 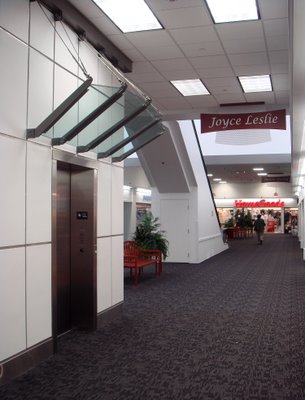 Suddenly, smaller stores that would suit the atmosphere of the mall flocked in. Quizno’s took over the former McDonald’s, Joyce Leslie; a largely children’s clothier opened the former, long-running Hawley Lane Shoes, which was once a lifeline in the dead mall surviving up until the pivotal turnaround. Older shops, who usually occupy strip malls are still here and seeing more customers; Payless Shoe Source and Dress Barn near Kohl‘s. 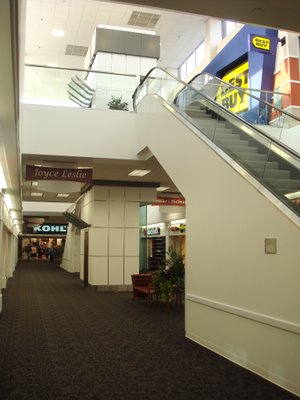 As part of the renovation, existing retail were granted ceiling-level signage via a "Main Street" appeal.

While Hawley Lane Mall and its ordinary big-box offerings might not draw those who aren’t local to come here, there’s plenty reason to proclaim it a noteworthy, different and/or more unique place for a few reasons. A revival effort is foremost something most mall management firms only dream of and another thing not seen often happened right here. While the mall itself was never to the magnitude of Farmington Valley Mall or even Naugatuck Valley Mall in size or scale, Hawley Lane Mall is indeed a smaller enclosed mall who survived in a dying breed, whose also adapted to the sweeping "lifestyle" component from the booming era; if a very compact one at that, without losing the original indoor model. 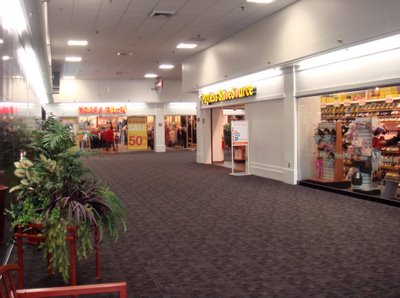 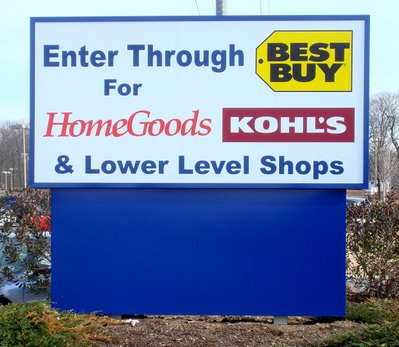 The efforts have paid off for this quaint mall. The most unique Target store in the state is here; complete with its own parking garage! There’s also a bizarre “mall entrance”-style Dunkin’ Donuts, which features a little hallway leading into the mall's Kohl's corridor, as well as the unusual “upper-level” where Best Buy is accessible. It gets even more bizarre; the mall suggests patrons walk through Best Buy, which feels awkwardly frowned upon to use the store as a thruway to get to Target. 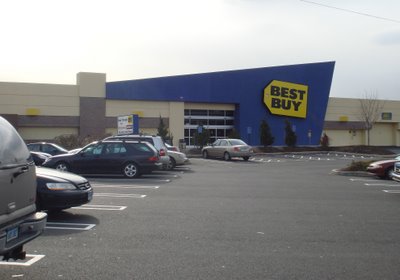 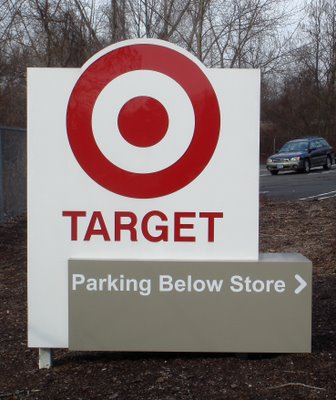 Since Hawley Lane Mall was once built on an incline, an upper-level, had to be built in order for another anchor, once Sage-Allen, to connect to the mall. Unless management was to build a separate mall entrance, it couldn’t ask it’s customers to trail alongside the building, in a blow to convenience, just to acess Target who serves as an outparcel. 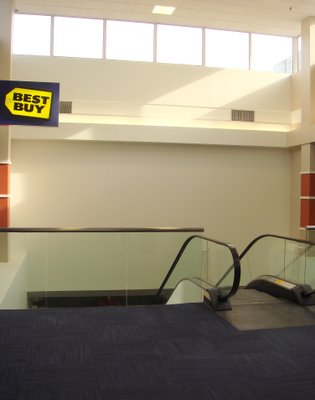 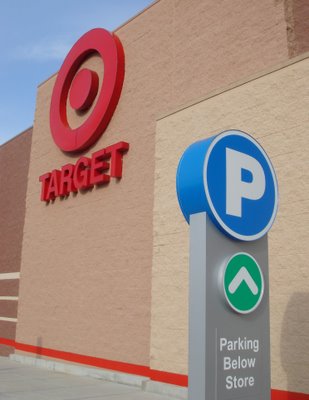 As for Target itself, who has constructed a unique, larger store housed with its own parking garage, elevators can access the front of the store so customers won’t, again, have to trail alongside the building to gain access to the store’s only traditional frontal entrance. The unfortunate, disjointed layout of the mall wasn’t addressed in the revival plan, most likely seeing grandiose expendatures falling into more of an “indoor-strip mall” hybrid as opposed to a smaller, enclosed mall but nonetheless, empirically, falls into being just that. 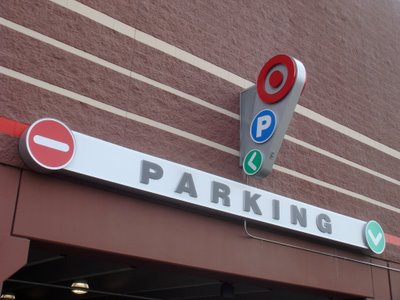 In many ways, Hawley Lane Mall could be what's halting the expansion progress of nearby giant and Westfield-owned Trumbull, who’s currently seeking a challenged Target anchor, which also newly anchors another Westfield center in Milford. The effort to add a Target was once fought here, and is currently being shot down by the town to add another shortly down the way. Possibities of adding Best Buy also fall under the same precinct. 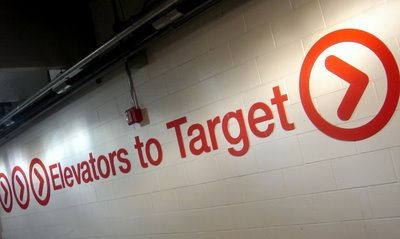 Success resulted because of a host of key reasons: there was no bombastic effort to de-enclose it; like many are finding trendy today, and no overblown cosmetic efforts resulting in financial waste. Apart from the developers working with what they had, the mall also luckilly fell on being in an opportunistic, under-served area where its current tenants speak for the demands of shoppers of a wide demographic. 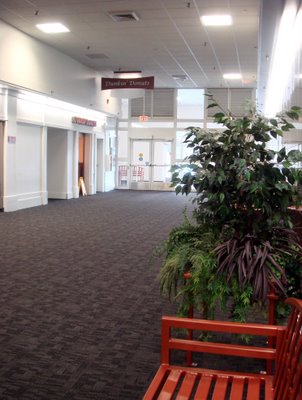 My first encounter with Hawley Lane Mall was back in Summer 2006, when the mall was a pit stop, unbeknownst to me, and also finishing up exterior façade renovations. I actually went inside the mall for the first time just last month, seeing that it’s really a quaint atmosphere and one no longer neglected. 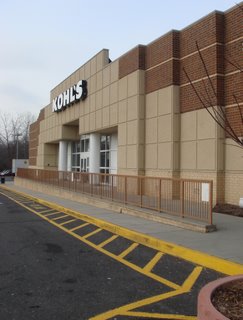 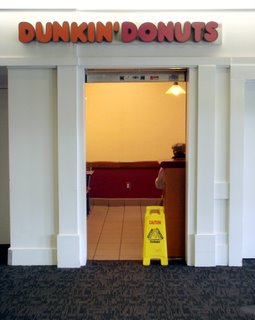 The Caldor Rainbow would also like to thank, who’s real name we never caught but I call “Gordy”; a mall maintenance worker who caught us and riddled with questions as I took these very pictures seen here. Gordy eventually, after offering a copy of my driver’s license for leverage, saw it alright for us to take pictures as long as I wasn’t a pesky competitor, divulging all kinds of trade secrets to the world. As far as that gloomy-eyed lady running the Asian nail place, or the perplexed elderly woman who crossed our path, thanks to you too! Who knows, maybe he thought I was on the payroll for Westfield…