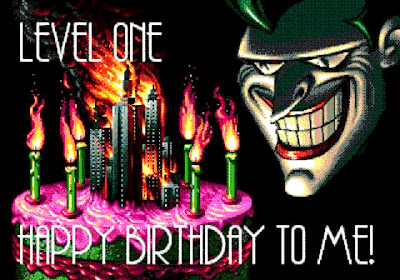 Usually I'm not overt about the celebration of my own birthday. So I'll allow this comical image of Adventures of Batman & Robin from Sega Genesis convey the mood (although I don't currently wish to see any metropolis in flames)! Crispin Glover should be playing The Joker in an upcoming Batman movie.

So a buddy of mine, Marc Bramhall, extended the courtesy by presenting something of interest to me for my twenty-second birthday; a piece of relevant history. What better way to extend my 22nd year on earth to look back on one of the cultural influences of my lowely Farmington life such as Westfarms?

Scouring eBay one day, Marc stumbled upon this vintage Westfarms post card, presumably predating to sometime in the mid-to-late 1970's around it's conception in 1974. A post card of a mall you say? Well, here's a testament to lost times and how much shopping malls and centers were the pride of American culture when my generation's parents were my tender age. Sadly, you're not going to find these like post cards of malls in any rest stops or [gasp] gift shops. Instead you might find one antiquated stock image of the Hartford skyline with some bad MS-paint job of the city's name written in magenta, a park (not Kinney Park I'd hope), maybe a bridge or something (as usual, clogged with all day and night traffic). All cultural divide aside (and "rising star" kerplunking), booming indoor malls of the 1960s and 1970s are been-there-done-that today; most of which have since submerged into the commonplace of everyday life of my product Gen X'ers. Kids today! They just don't appreciate these climate-controlled centers of past! 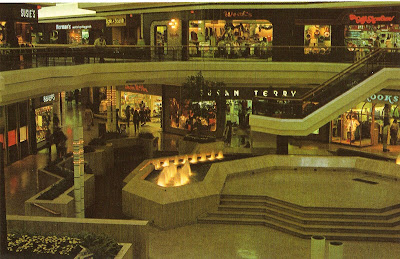 Westfarms; circa 1970's
Just look at this image! Oooh, to have a time machine... It's sure nice to see some oddly justified twin-totem polls featuring minature globe lighting the central of the walkways instead of those gaudy kiosks! Many natives who've frequented the mall in the past might take particular note at this time machine shot for minutes trying to inspect every pixel of it and compare it to the place we know today. One of the most alluring aspects, beyond the now-removed fountain are these certainly out-of-this-world store frontages which are all sadly long-gone within the alpha years of the mall. Have times changed or what?!

From the top-left; Susie's, which looks be a women's clothing store is now Cache; a prom-dress merchant, whose recently drawn live-model publicity. Herman's World of Sporting Goods; seen in the left corner, which was likely one of the last sub-anchors, and top of its game before any Sports Authority, or Dick's showed its face. A memorable, quaint sporting goods chain was among the last seen here to leave the mall in the mid-1990's; shortly before the 1996 Nordstrom wing expansion (and the company's own bankruptcy by this time). The former Herman's has changed its [preferably lacy, stringy] underwear many times but most recently to none other than Victoria's Secret.

Sights-Sounds; neighboring Herman's, likely a record (and 8-tracks!) vendor, seems to have cut into Herman's space since is now part of an expanded Victoria's Secret, relocating from a former downstairs configuration from the '90's. Downstairs to the left is Bakers; presumably another clothing store and next to it, with some time-respective, multi-window display facade since decimated by huge glass panes of Godiva chocolates today.

Thom McAn; a frequent shoe store chain (along with Kinney Shoes, who was upstairs near G. Fox) around the 1970's throughout the 1990's save since sold their stock to Wal-Mart, once had prosperous storefronts now occupied by Build-a-Bear Workshop. Susan Terry has become likewise upscale twenty-something women's fashion boutique; bebe while Brooks; hiding behind the jagged manual staircase with those curvy showcase windows has since become drywalled over having recently been home to a bevy of stores; seaonsal, Sephora (since relocated), and a ill-fated filler sports memorabilia store.

Those others; Worth's; with a groovin' brown facade and flower-shaped bulb-lighting must've catered to the hip crowds and the nearby The Gift Showcase; both with the swanky script writing have since become many things in it's subdivided form; once a maternity outfit and Polo Company Store but now all home to a generational revival; Abercrombie & Fitch. 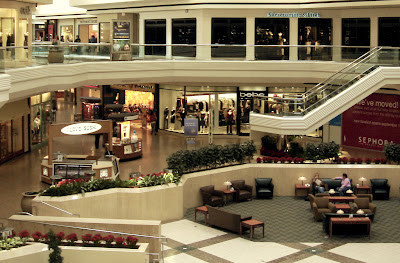 One of my grandest laments, in particular, is the absence of the fountain today. Those who remember the fountain remember not only it's wonder but also that mysterious gaping hole into nowhere where all the water recycled! Well at least that's what we thought as kids (and a little beyond; the mystery still lives). In 2002, Taubman ceased and removed the original atmospheric 1974-built fountain in favor of more, rather questionable spaced seating and couches for people to carry on mall banter.

The stage, frontage to the since gutted fountain, is present at Connecticut's other Taubman; Stamford Town Center, has become a table-and-couch lounge area which complements the new Starbuck's kiosk. An area which once displayed the ginormous, annual Christmas tree, still does a holiday theme, not quite to the same magnitude.

While the center court hasn't changed drastically beyond some minor cosmetic enhancements like most leftover Taubman malls still around: the removal of some of the signature Taubman "seating pits" like one seen here to the left which is understandable given the climate and failed socio-experimentation of the seating pit since. Others include newer, brighter center court tiles, plastic-ridged lining over the mid-levels, reflective silverish railings to replace the wood; all of which became a coming millennial template for all their centers no more than a short decade ago. The basic mold of the center is quite the same; generally unchanged, like the terrazzo tiling, and true to the classy earlier design.

Knowing my bend and fascination with '70's-era Taubman malls but specifically the junior one in my hometown; Westfarms. I've seen the mall adapt through the ages throughout my time, not quite as much as friends and family. My father also worked here shortly sometime around the vintage of this postcard (1975), in a department store Silverman's; since occupied by Brookstone and The Discovery Channel Store. Furthermore, my best friends' parents actually met here, dated and later married during a time this mall had a movie theater (now occupied largely by a restaurant; California Pizza Kitchen)! While I've only been here since '85, Westfarms' tenants have changed greatly into the widely preserved mold of the center today; not having stripped too much of its origins. 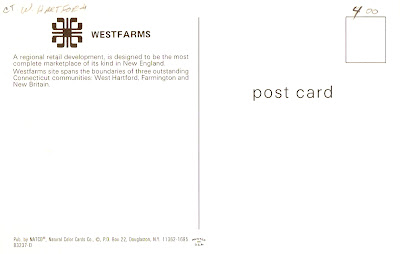 "A regional retail development to be the most complete marketplace of its kind in New England. Westfarms site spans the boundaries of three outstanding Connecticut communities; West Hartford, Farmington and New Britain."

This card appears to be within a series of two known; one of which has been displayed on Malls of America (and a day before my girlfriend's birthday last year) and taken at an earlier time when the mall had an estranged, short-lived green-clad flooring and features the since removed the iconic "information" tower doning the pinwheel "W" logo which lasted into the 1990's. There are some other noticable differences here; flowers, mini-bulb lit towers, and even a art display on the stage which is closed off by a roping barrier and a walled-off Lord & Taylor wing added in the early 80's.

In the meantime, I'll have to recover a picture of that "rolling ball structure" in it's respective time since it's still here. Here's to hoping one of you keen-eyed, razor-edge memory readers can pinpoint the exact year of this card.

Visit our Flickr set and see why Westfarms couldn't look any classier today.