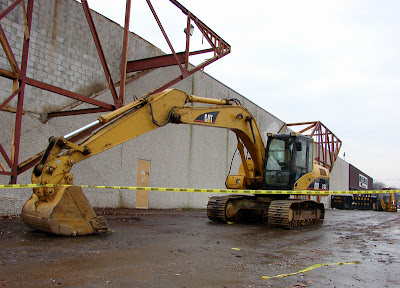 What's going on over at 983 New Britain Avenue in the Elmwood section of West Hartford?
Reader Jude of the Caldor Rainbow and local resident who runs a site of her own, "Scenic Root" swung by the oddly-sloped facade building of fallen retailer Caldor at the former "Piper Brook" area to notice it surprisingly being dismantled and felt compelled to inform us.

Chances are, if you're local, you've seen or remembered having shopped the now time-warped, weather-damaged, pockmarked stucco-nightmare which has been hailed as a infamous town blight and a continual haunt to residents in a plaza whose pavement is akin to shattered glass -- and shattered [dollar] dreams. 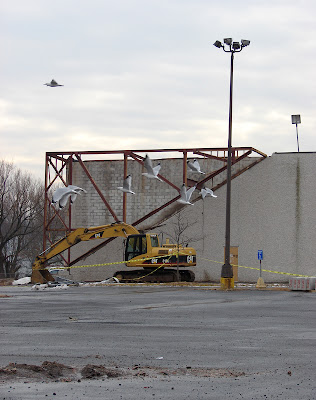 Surrounded by those signature yellow cranes, the building is apparently finally being "taken down," piece-by parallelogram-piece.

The Caldor Rainbow has taken a trip to the gravesite this Sunday morning, and brings you these pictures -- the final images of Connecticut's final memory trip to the golden age of Caldor expansion. 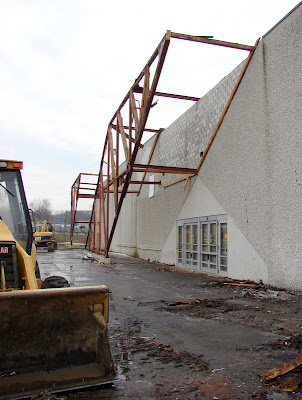 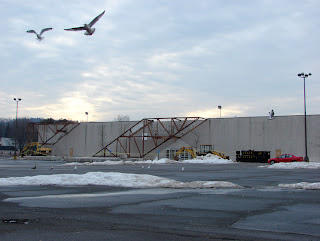 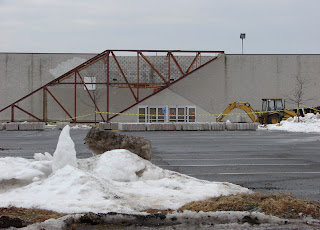 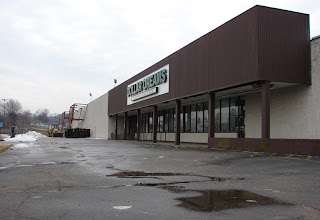 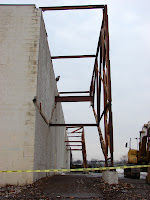 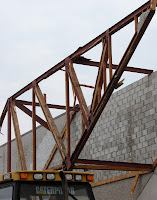 Locals have questioned for years about the usage of the site, who hasn't seen much success after Ames left it vacant in 2003. An area of much distress, includes the dual-tenanted plaza. A dollar-centric "Dollar Dreams;" a neighboring the vacant husk continued operation out of an equally crippled store space held by Waldbaum's and before it, Stop 'n Save. Then in late 2007, word came about of a phantom supermarket chain hoping to dominate the long distressed space, and it might happen soon enough.

Late last year, we suggested if someone didn't rip it down, it might fall down given the hazardous, withering condition it has suffered and endured since before and after the end days of late retailer Caldor, who crafted the iconic, yet equally bizarre "swept wing" look that became synonymous with the then rising retailer in 1972.

A typical Star's spot advertising questionable "Around The Clock" business, shown in The Hartford Courant in November 1972.

Before Caldor took it over, renovating it extensively, the site hadn't much long-endured success when it was Star's Family Fair and a Popular Supermarket, which opened in September 1962. In it's later years, Star's Discount, who practiced business unusually was oddly open around the clock only in Elmwood, offered just about every odd and end. When it closed the Elmwood location in the early 1970's, retailer Caldor snatched up the space and had decades of success until the chain closed up.

Star's Discount, who later became known as Nu-Star's, had two other regularly operated locations apart the closed 24-hour Elmwood location in Wallingford and Torrington. The chain closed up for good in the late 1990's. 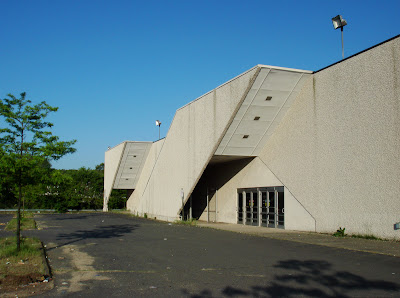 Others like it spread to this West Hartford-Elmwood location as well as Southington in 1973. All but this lonely location has been snatched up by Wal-Mart in 2000.

With the site at 983 New Britain Avenue coming down, there's only one former Caldor left in Connecticut in Groton, which is currently under use by the Pfizer Corporation (you can find details on that one here and here).

We honor the former site as a window into the distant past -- the rich heritage of Caldor. Ever since the early days of 2008, the building served as a floodgate for memories long beyond what it was built for. We'll certainly miss it, but hope the site sees prosperity in the near future.

If you haven't already, please review our premium Caldor Store Locator and our report on the now late site at 983 New Britain Avenue.

UPDATE / FEBRUARY 5, 2008. The former Caldor site will become a PriceRite discount supermarket. Existing land which includes demolition of the vacant, outparcel Piper Brook Restaurant will be "a new building that would house either a retailer or a bank." Also, wondering what happened to the "swept wings?" Appearently, they were "...knocked down... because it was a safety hazard." Read more on The Hartford Courant.
Posted by Nicholas M. DiMaio at 11:15 AM 18 comments: