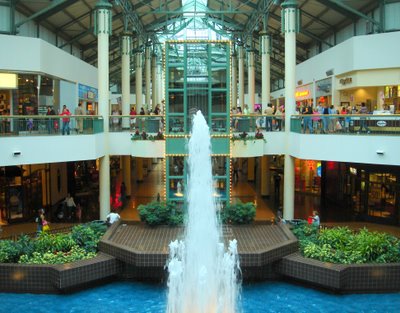 In unfortunate news, Macerich Company-owned Danbury Fair Mall, located in Danbury, Connecticut is currently underway for a proposed renovation plan beginning in January 2007 and to be completed by Spring 2008. The news, a good month old, slipped under my radar, was reported by Bob Chuvala of the local Fairfield Business Journal. This will be a first renovation for the mall, built in 1986, vastly unchanged since. According to the article, the mall is in store for more of a cosmetic than structural overhaul claiming the changing shoppers' habits of staying in malls longer nowadays compared to the 1980's.

Refurbishments will sadly exclude and remove of the center court fountain in favor for a spacious lounge area complete with aerial seating, coffee bar and a scaled-down water display. Brown-shaded tiles will be removed for lighter stone-porcelain flooring, wood-accents along the mid-levels, tan-painted structures along the ceilings, modern lighting fixtures replacing the globe-bulb lighting, and a reorganized food court and restrooms to provide better visibility. As far as the mall's outer-appearance and almost year-vacant Filene's store, "no decision has been made yet on what Macerich will do with the shuttered Filene’s department store, which the company purchased earlier this year, and no renovations are planned right now for the building’s exterior."

While the plan looks very promising and more colorful than that of the insipid white-clad Buckland Hills renovation a few years back, the mall's once distinct look will be going away soon. The Caldor Rainbow will feature a full-spread on the mall with a complete photo gallery shortly before the mall's renovation initiation in January 2007. Refer to the article for a conceptual image of the future of Danbury Fair Mall.

I remember my visiting the Danbury Fair Mall since I was a kid. After almost 10 years, I finally re-visited this mall and did some quick Christmas shopping there in December of 2006.

I really don't think they should go too crazy on the renovation. I really think that they should keep at least two things; the fountain and the Globe-Bulb Lighting. It's true that the fountain takes up a massive amount of space, especially when the mall's extremely busy. But I feel that the oversized fountain keeps the noise level down. I'd rather hear the sound of water instead of people and screaming kids. And in my opinion about the Globe-Bulb lighting, I feel that they should keep it because of the malls name. I mean, when you go to a fair, there's globe bulbs everywhere, and the lighting just helps it make sense to me! But thats just how I feel about it....

Well it's going to be about a year, We shall see how this renovation turns out.

I can't disagree with anything there, Joseph. I'm not poo-pooing the renovation; it was bound to happen sooner or later. By the looks of it, it will probably depart a bit from the "Fair" theme, but it's still promising.

I will really miss the scale of the fountain; it's like the soul centerpiece of the mall.

Here's a question--was there ever a mall in Danbury before Danbury Fair? It seems weird Danbury went until 1986 without getting an enclosed mall, and I always wonder if there's an old/dead/demolished mall hiding somewhere in Danbury.

As far as I know, Danbury never had any smaller malls before Danbury Fair Mall was built in the mid-late 1980's. To say in the least, I believe Danbury had a pretty vital downtown as well as a shopping haven along Newtown Road, Federal Road, and Main Streets. Newtown Road's shopping area has been there since at least the 1960's with a Bradlees and Stop & Shop department stores.

Let's not forget, Danbury lived it up with *the* Fair; as far as I'm concerned the Danbury Fair was hailed as the most profound, culturally relevant old-fashioned all-American Fair throughout Connecticut until the early 80s (about 1981, when the mall was drafted) likely attracting those from all over the state, but also New York, which is approximately 10-15 minutes from the border.

Around this time, the city must've seen years of decline of the Fair's trend per them deciding to keep the tradition vital in modernizing with the mall trend and adapt the elements of it (paying homage) onto the new grounds and life as a mall.

Compare this photo with my new one here, that you left that comment on!

Danbury did have an enclosed mall, downtown, built around 1968 and called appropriately, the Danbury Mall. It suffered from c-list tenants and anchors and was situated in a less than desirebale part of the city where suburban housewives were often startled by glowering teen-aged panhandlers. The novelty of indoor shopping wore off quickly aand the mall ceased operating in the early 70s. Amphenol, a manufacturing concern, took over the space but it too eventually left the area, and the building was torn down. Now only a slab remains.

Several years ago speculators slated the empty Main Street site for a 580 unit upscale high-rise condominium complex but even after controversial tax breaks from the republican-led city BRT, the project developer placed the plans on indefinite hiatus.