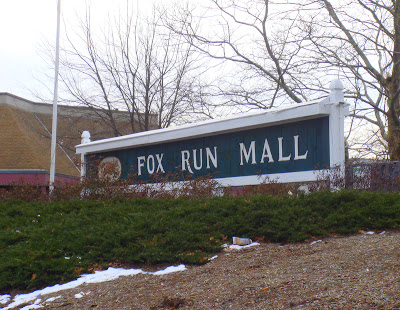 The fox certainly ran, at least at one point in time at Fox Run Mall. Located in Glastonbury, Connecticut; and shortly off CT-2, the town is widely known as Hartford's upper-eschelon neighbor whose town's commerce is otherwise shaped by its unique layout of geometric buildings and unusually crafted, non-pareil versions of dominantly uniformed franchise chains hearkening back to an appearent boom of sharp-angled 1970’s and all that’s come along way with it. Its developer, New Plan, has indeed a new plan for Glastonbury’s Fox Run Mall as it will soon be recognized beyond it’s once captivating, now long-outdated design when a remodel ensues with the arrival of a third Whole Foods Market for the state. 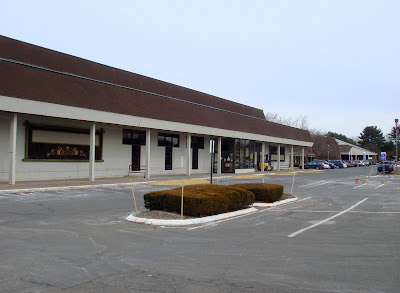 As of December 2006, Shaw’s Supermarket operated one of their more unusual looking locations on the furthest end of the strip when it succeeded an independent grocer in 1998. Following a company downsizing of Connecticut-wide existing stores, it's become vacant along with a handful of other stores in other regions of Connecticut. But the prospect for a vacant anchor has taken flight by New Plan; the proposed Whole Foods will be constructing its own parcel outside the timeframe of a decades-old supermarket of past which will begin a sweep for entire center. 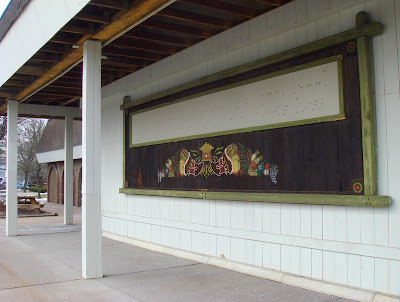 Beginning with the advent of Whole Foods, the once architecturally vital center will feature more a contemporary renovation to give the once hip, brown-shingled center a refreshing, hopefully devoid of visionless, empty appearance like most shopping centers have become today for fear of bringing fourth unique presentation. As trends have changed by decade, times of past have conditioned developers today to drop importance of mere shopping centers, getting the job done constructing safety and simplicity over richly diverse style. 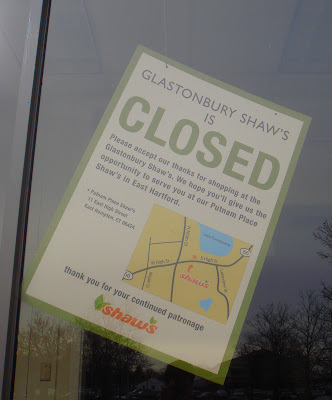 There was once a time when design and shopping centers were pinnacle to presentation. Back when shopping centers where in their prime, and seemed culturally and architecturally relevant, their developers had vision as centers like Fox Run show today. They were shaped by the conformity of the new age; a new frontier of design back in the 1970‘s whose peak of experimental and often eccentric science-fiction-inspired design was on high. Fox Run Mall was quite frankly the swankiest presentation around and still showcases as an outliar. While Fox Run was certainly cutting-edge then, its groovin' design tells of an appearent lost trend. 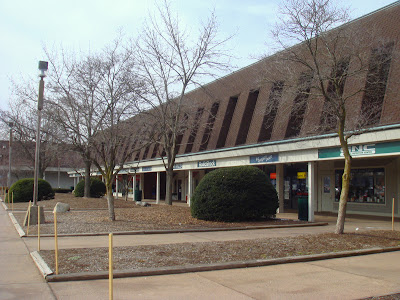 Like it windows back into a galaxy far, far away, there’s all the vestige; sloped and shingled hut roofing with other bizarre, grandiose shapely roofs makes it almost something islandic this side of Star Wars. Throw in some oddly-painted murals at the former Shaw's, brown-draped everything, Euro-aqueduct-style brick arches, and you've got a portfolio of Fox Run's richly groovy texture. There were no Ewoks to be found in the frontal facing landscaping areas, once sought to be a highlight of Fox Run's cunningly different atmosphere, which still bare foreground accentuating its strip presentation of shops. 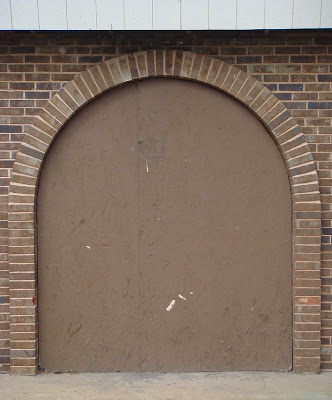 They certainly had a thing for these Italian-inspired aqueduct archways, more or less a staple of 1970's trends. 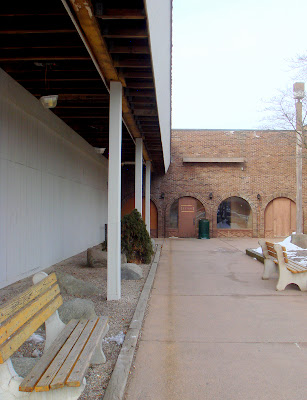 Just one of Fox Run Mall's few time-expired tenants.
While Fox Run isn’t quite a traditional "shopping mall", given its scale, the design is certainly one that may have been ahead of its time with the regional malls (especially Westfarms). When a trend of enclosing (existing and new) malls sweeped the land in the early 70's, developers at Fox Run wanted to invite a different idea. They didn’t exceed the expectations of a regional shopping mall given their alloted space and project goal, they made something of a hybrid strip mall concept; essentially a strip mall-based center complete with some amentites of a shopping mall including (non-faux) landscaping, benching, but also a scaffold to protect shoppers from weathering all under a true blue sky to promote an outdoor feel. 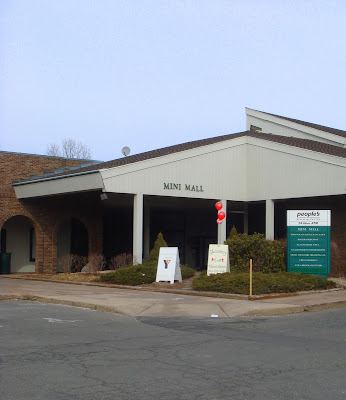 Early phase of development threw in a "Mini Mall" for good measure. 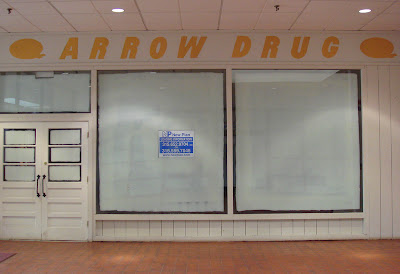 The other angle to Fox Run is its traditional indoor-style; a "Mini-Mall" on the right side of the center which features a small corridor-length indoor portion catering to just a few other shops not featured along the showcased strip. It's nothing big at all, and probably something that could've benefitted from being expanded. Feeling the shadow of past today, most of those shops are now small-time community-based or within vacancy like Arrow Drug; whose Walgreens-esque wooden "mortar and pestle" logo still decors the outside. On the contra; all the strip shops are fully occupied; ranging from unique "lifestyle" shops; a bank, laundromat belonging to someone named "Luba" (couldn't help thinking "Jabba"), and unique dining like Elisa on The Ave to chain stores, like Radio Shack. 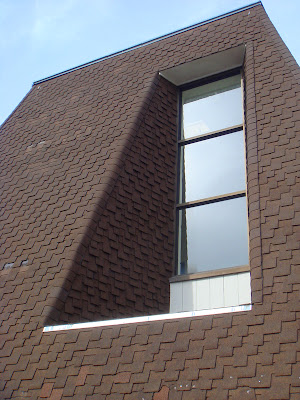 Could it be Fox Run’s space-aged design was a forecast to the sweeping “lifestyle” concept that’s embraced today? One could only hope, whatever the future brings to Fox Run, it might still retain its independence in the bland space of shopping centers.

Digest on the Yahoo! Photos-hosted photoset of Fox Run Mall. We visited it just before the big snow storm so these are freshly recent. My treat for neglecting you all this past week. Have a superb, possibly long weekend!
Posted by Nicholas M. DiMaio at 6:00 PM

Thank-you for showing pictures of the closed Shaw's in Glastonbury. That proves once and for all that it did close. No one believed me because the articles in the Herald, Bristol Press, CT Post only mentioned Southington, New Britain, and Brigeport as closing. Everyone was saying I was lying about Glastonbury because I'm a disgruntled former Southignton employee. (I'm not disgruntled anyway). Futher more I had no reason to doubt the person who told me that one of the Assistant Managers in Southington told me that a lot of the people form Glastonbury were going to the new East Hampton store, so they much be closing the Glastonbury Store.

There's a very shiny Shaw's over in East Hartford at Putnam Plaza (basically you take a right onto Main Street and follow it). The plaza's doing very well despite a vacant Ames who can't find a future tenant.

I'd be more excited about Whole Foods moving in but the place is a little steep and there's already a store at Exit 43/I-84. This proposed Glastonbury store is far out of my way but will probably fit right into that town's market.

I'd stick with Trader Joe's for now - only wish they would build some more stores and expand that tiny one at Corbins Corner.

Can someone please explain to me what's wrong with the color of brown nowadays? I mean is this realistic color not 'contemporary' enough? How is tan,salmon,and every other offwhite color considered 'in vouge' nowadays? I just don't get it!

Anyway, nice pics I have a few questions to ask. What store is housed in that brick building in the back with the arches? and where exactly is that area with the shingled windowed roof located in approximation with the vacant Shaw's?

I don't entirely see why brown is isolated today and snubbed for being "out" either. I suppose the color is just very indicative and scarred as 70's and early 80's-centric color. Maybe it will come back in time but for now it's "mahogany" to you!

As far as those arches beside the market, they were boarded off like you see in the pictures. The ones to the left were presumably the mall's design or possibly a long boarded-off co-tenant while ones on the other side hosted some restaurant I believe. Anyhoo, it was vacant.

That windowed roof was certainly bizarre. It's actually on the opposite side of the supermarket over by the "mini-mall" and to the furthest right of the strip stores. It's probably the most unusual element to the entire mall's design. If you see in the extensive Yahoo picture album, the structure didn't even reach to the ground as it appears "hovering" over the landscaping. There was a door on the other side, I believe they are alternate stairs leading to the offices over the shops.

I might have to do some kind of overhead directory to give readers a perspective for the next mall entry.

Well some people call this modern art, but sometimes I saw things that are just not art but well they have money and world it's like this, but the food question it's not like that, I eat outside home many times like everyone but I like my moms cooking since 3 years ago I don't eat ouside haha
Thanks

In my opinion one and all should browse on this.

Pretty worthwhile info, thank you for the article.