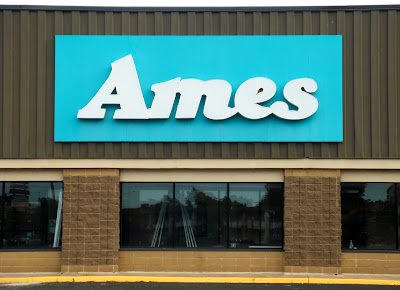 Ames Department Stores closed its doors in 2002. Most all of its former locations have been washed over or occupied by succeeding retailers with only minor remnants to remain.

Company closures always leaves the question of what to do with the scatter of unoccupied locations. Most of the time, there's a bigger dinosaur or whippersnapper hoping to gain ground by getting those spaces secured no more than the instant a store closes. It wasn't much a problem for those awaiting the doorstep of Caldor, who shuttered in 1999 having left behind many prime locations quickly snatched by replacement retailers Wal-Mart and Kohl's. As it was, Ames stores didn't share the fervor of success like Caldor or even Bradlees did in its time. It followed the flutter of the Chapter 11 black hole of retaildom that stuck its department store rivals around the same time, but is still struggling through the post-mortem stages. 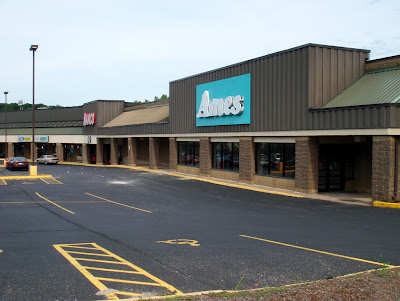 AMES OF ROCKY HILL, CONNECTICUT OPENED IN 1988, IS NOW HOME TO A PORTER & CHESTER INSTITUTE

Ames, the Southbridge, MA founded, Rocky Hill-headquartered chain of discount department stores, like many others, sealed the late 20th century retail rivalry graveyard along with Caldor, Bradlees, who both were stricken with bankruptcy at or around the turn of the 20th. 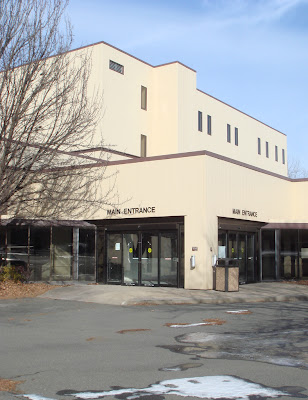 Imfamously, the Ames company has been known as the offender of overzealotry in its retail strategy and acquisition like its once rival chains. Following a lofty and damaging purchase of the diseased Zayre department store chain in 1988, Ames suffered from a misstep which almost cost the chain its life early on. Throughout the 1990's, the company struggled to balance and when they did, they continued to oversprawl. 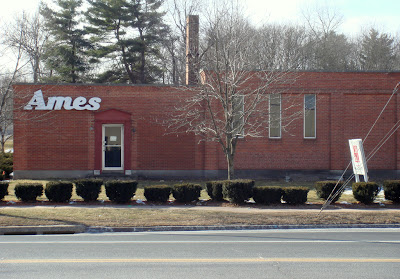 Unlike the current juggernaut retailers Wal-Mart and Target, Ames spent what they didn't have only furthering their doom. While almost successfully expanding, covering the eastern coast as far south as Florida with stores and during its final years, even have expanded into the mid-West Chicago-area, it was only to catch up with the company. Like over a decade before, Ames swallowed itself, desperately trying to compete instead of playing it conservatively which could've kept them around today. Upon the closure of Caldor, Ames then misstepped again by overpurchasing eight former Caldor stores, exceeding the number they likely should have played.

Three years later, Ames is still short of being a distant memory.

Still fresh in the minds of many states due to vacant locations here and there, including five in Connecticut, unattractive store locations continue to showcase themselves. While a good number have successor retailers including Ocean State Job Lot, who snatched up many early locations, Lowe's has managed to weave its way into making futures of a few recent sites as of late including Torrington and Meriden. 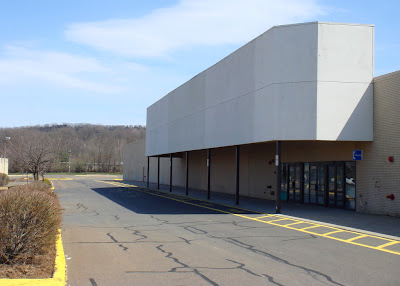 THE MERIDEN STORE ON MAY 22, 2007 -- JUST WEEKS BEFORE IT'S DEMOLITION FOR LOWE'S WHICH HAS TASTED THE WRATH OF A FORMER AMES NOW VACANT

In 2007, three more former locations lingering post closure just recently occupied by Ames were snatched up including stores found in Torrington; at the Torrington Parkade, Meriden; at the Ames Plaza (formerly Meriden Parkade), and Naugatuck at the Mountain View Plaza. All three have found future tenants but five more are still struggling to find their futures. 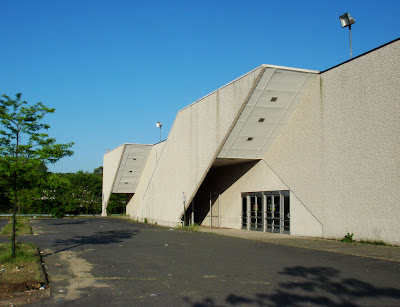 A ROTTING AWAY WEST HARTFORD LOCATION ALONG NEW BRITAIN AVENUE HAS MUCH HISTORY AS AN ICONIC "RAINBOW-ERA" CALDOR, NOW GONE TO A PRICE RITE GROCERY STORE

A flurry of locked up stores are still flourishing as if they were still alive today in parts of the state and elsewhere. In Connecticut, the Rocky Hill location is nothing short of a memorable, infamous beacon whose signage can still be seen lit against the night sky over Interstate 91, Exit 24 which dons its company signage and all. A healthy looking spot sandwiched between Home Depot and TJ Maxx on Main Street in East Hartford is perking for new life, with building signage still up. Another in the boons of Dayville are lit like an oasis gas station, while a once former Caldor location in West Hartford sits darkly, slowly deteriorating with blacked-out roadside signage, without any hope to find a future tenant. 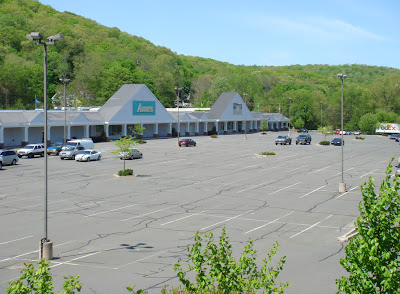 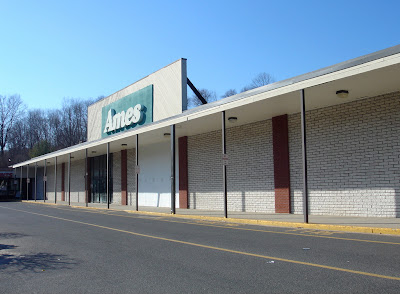 THE FORMER NAUGATUCK STORE, NOW HOME TO OCEAN STATE JOB LOT AS IT WAS ON MARCH 29, 2006 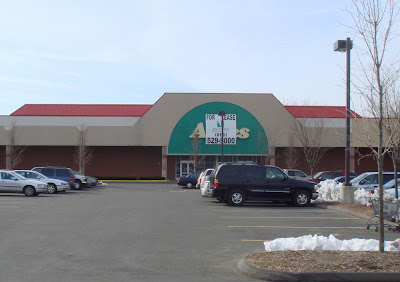 THE VACANT EAST HARTFORD STORE FACING DIFFICULT TIMES IN AN OTHERWISE VITAL PLAZA AS OF FEBRUARY 13, 2007 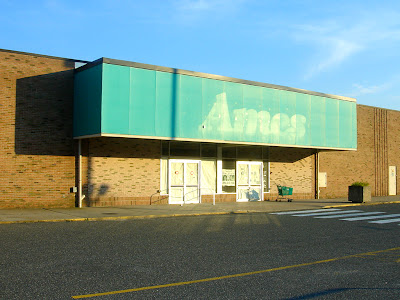 THE NOW DEMOLISHED TORRINGTON STORE AS IT WAS BLEEDING A LABEL SCAR UPON SUNDOWN ON AUGUST 24, 2006 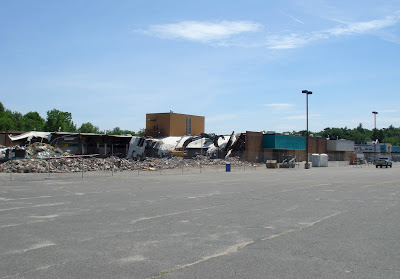 THE HALF-DEMOLISHED TORRINGTON STORE ON JUNE 7, 2007 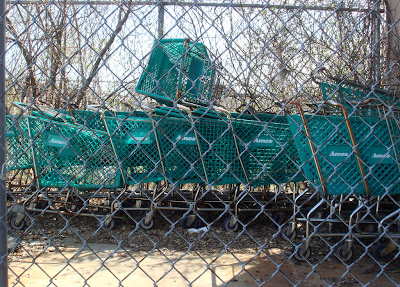 EACH SITE HAS IT'S OWN FLAVOR: THE FORMER MERIDEN SITE WAS CHARACTERISTIC OF HAVING WHAT CHRIS FONTAINE OF THE AMES FAN CLUB ONCE CALLED A "SHOPPING CART PRISON" 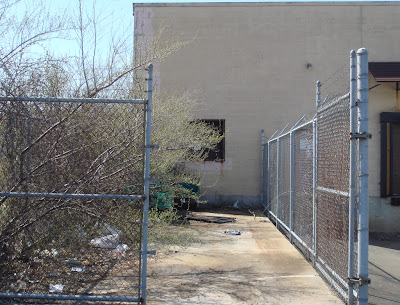 FREE AT LAST? A SHADOWY SAVIOR CAME TO UNLEASH THE SHOPPING CARTS FROM IMPRISONMENT

Ames Fan Club is a paramount database for the defunct chain who, with the help of its loyal contributors, keeps tabs on existing and bygone Ames occupants by webmaster and creator Chris Fontaine so please check out their extensive photo galleries and ever-resourceful forums for further information. As always, we make sure our stats are up-to-date. If we happen to be wrong, correct us by leaving a comment or emailing myself personally at XISMZERO@yahoo.com.

The Torrington as of today has nothing left of it at all.

I got a "souvenir" from the site a mangled piece of metal, it's the least I could save, sigh.

This is a good sign new businesses are filling the gaps.

There is an Ames further into New England. It is at Wellington Circle Plaza with 65% of it's windows boarded up. You can still see the sign glimmering in the night as if it were still alive.

Xbox Fan is right. It's in Wellington Circle in Medford, MA. Signage is still up and everything.

Thanks for the heads up.

I visited the Medford location last Summer and took numerous amount of pictures. I first found out about it on Ames Fan Club eventually stumbling across it one night trying to find my way back coming back from Boston. Funny little story, when I made tracks to find it again upon my next venture into Boston, I ended up having to ask some firemen sitting outside their station as to where it was.

I suppose its nice to know its still there and partially alive! Can't believe the space is hard to fill; that split its on is a bustling area. I heard they filled the Toys "R" Us space however.

It's crazy how they have not, so far, found something to take Ames's old spot! It would make a nice WalMart location, or an H & M, or a Borders...so many possibilities. And adding any of those stores would bring in more customers, especially since none of the above listed stores can be found for at least five miles or more.

Yes, they have filled the Toys R Us space. It seems they are filling the Toys R Us with, of all things, a SHOE STORE!!! Nothing else has been announced to share the space so far, but I hope that they make it a multi-shop thing; imagine a shoe store as big as a Toys R Us!

Regarding the Ames store in Bloomfield (which had previously been a Zayre location), it is now a Burlington Coat Factory store. Lowes and Home Depot are new stand-alone buildings situated behind the Copaco shopping plaza where Ames/Zayre were once anchor tenants.

I sometimes drive near a vacant Ames in Agawam, Mass. It is close to Rocky's Ace Hardware and across the street from Walgreen's as you go up the hill toward Feeding Hills.

You've made one error, the Ames in Torrington is becoming Big Y, not Lowes.

Lowes will be taking up the old Big Y space once the new Big Y is constructed.

This is amazing, i can't wait to visit all these stores in CT. I'm super thankful for your documentation of these dead stores.
I especially love the retro toys r us but the Ames are equally facinating.

East Hartford finally removed the signage and repainted the green background,once they sub divided a small parcel of the empty Ames for a Pet Smart.
However, the former main entry way for Ames, complete with the original entry decals on the doors still are there.

SO WHATEVER HAPPENED WITH AMES? WRITE HAMMER@NJ.NET PLEASE

i worked at both Caldors and Bradlees...i was at Totowa NJ Bradlees when they closed..i miss em

I'm in NY until the 6th, there is a vacant Ames with a very prominent labelscar in Painted Post, close to where I'm at. I can get the photo if you want.

zygor guides said...
This comment has been removed by a blog administrator.
4:03 AM

Actually have a very nice blog, I wish I could see everything you have all the time, I'm really entertained by your comments, and best wishes for your blog

The Ames in East Hartford is now partially Petsmart.... but a portion of it still exists

whats the rest of it?

The Ames That Used to be in my area: Washington Dc Closed back in 2002, it turned to a nwl (National wholesale liquidaters) but then it closed... Now its a forman mills -.-

Ironically, the Lowes in Meriden is also now closed!

I worked at Ames Corporate offices for 10 years, 1988 to 1998. You have some of the locations wrong, the Manchester and Vernon Connecticut locations were never Ames stores, they were Caldors Stores. I live in Manchester so i am very familiar with the locations you refered to.