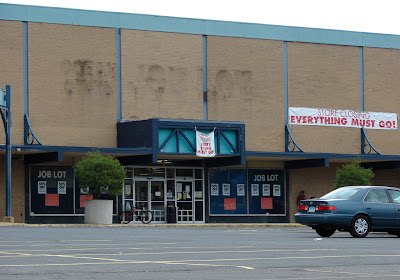 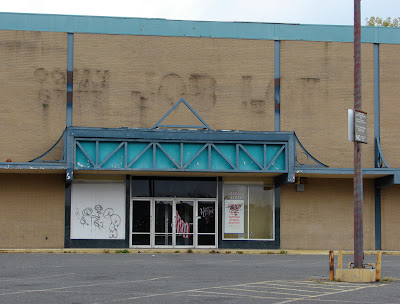 Thanks to Marc Bramhall for the forwarding the initial details of the Bristol Press story.
Posted by Nicholas M. DiMaio at 4:35 PM

Hey dude! I see The Caldor Rainbow has been very busy the last few days. I really wish I could've been at Job Lot for its final day, but alas I had to work. (Gotta pay those bills somehow). In a way I'll miss the mall once it's gone. Many a day I spent sitting in the nearly deserted place working on my writing, reading, and playing video games in the run-down arcade. Nick, in case neither one of us can make it to the demolition I hope they decide to show it on TV.

Hey Nick. Have you ever been to the Ocean State Job Lot in Gales Ferry CT? Gales Ferry is a part of Ledyard. That whole plaza is a real trip back to the 60s! I'll send you a few pictures if you desire.

What did the Ocean State Job Lot sell, though?

I think I have seen pictures of it being demolished here on the net. The mayor was trying to break down one of the walls of the building. It took him some time, but he finally got to punch a hole in it with the machine he was using. I remember this mall, not bad, but not as great as Buckland Hills or WestFarms.

hey Joe, Im from Gales Ferry; we were just talking about Vality!
I have an old picture of a Vality bag!

We added your article to our auto glass directory. You’ll find there is link to this blog.
cash advance

Well Whattadya know, yet another great site to add to my reader! Google blog search has you pretty well indexed it seems! you have some brilliant contents!

Socialkik is the #1 place to buy cheap facebook fans, you can also buy twitter followers, youtube views and subscribers and google +1 votes. Try coupon code: STANDARDKIK for $10 off.