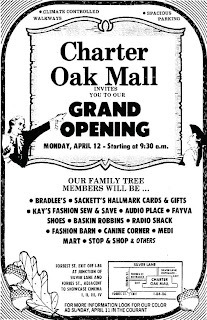 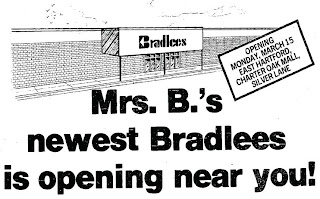 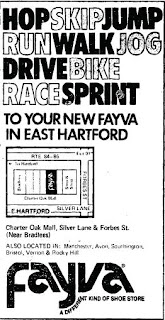 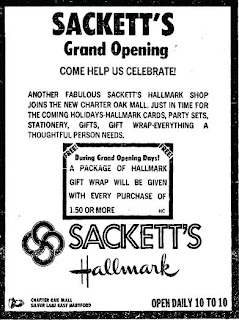 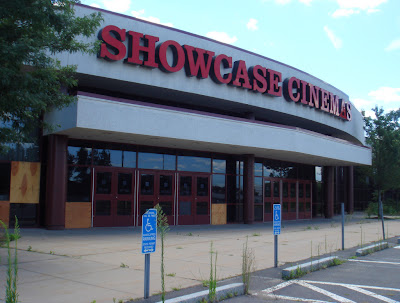 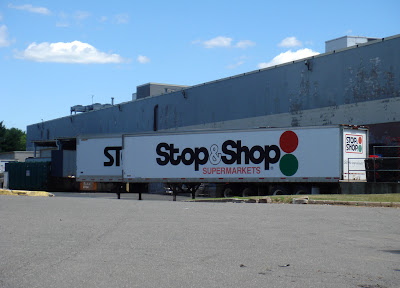 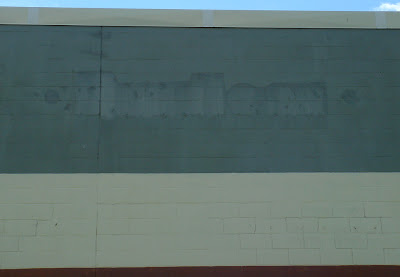 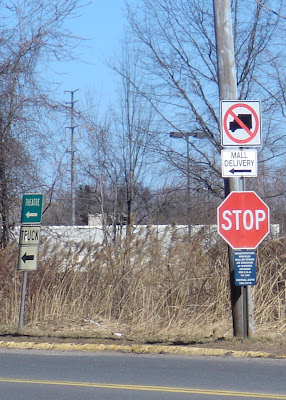 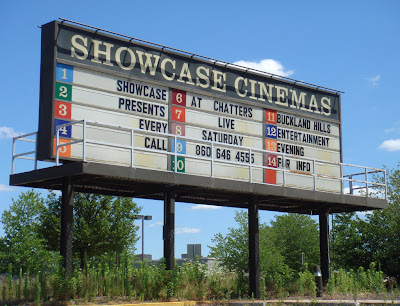 Got anything on the Charter Oak Mall? Send us an e-mail or leave a comment about your experiences. Make sure you head over to Dead Malls and read Jim Sawhill's testimony on the late mall, a Connecticut local who seems to have a solid recollection.
All newspaper advertisements courtesy of The Hartford Courant. All digital images property of The Caldor Rainbow.
Posted by Nicholas M. DiMaio at 11:18 AM

So did this mall have an interior entrance to Stop & Shop?

According to Jim Sawhill, Stop & Shop had a mall entrance and retained it up until 1993, when they remodeled their store. My impression is that the mall was entirely enclosed, with both anchors connecting on each end into the mall with additional/simultaneous sidewalk access.

I honestly haven't been into the former anchors today, but when I do, I will investigate for any vestiges inside and report back on the page.

I grew up nearby and still live in the area and certainly remember the layout.

Bradlees and S&S both had mall entrances, If you enter the current Big Lots store, you will notice directly on the left, the lower ceilinged area which used to be the floral section of S&S and had an opening into the enclosed mall area.

The "mall" area was pretty plain, all the stores were on one side, picture the current plaza's stores pushed back a few feet and a long empty hallway leading from Bradless all the way to S&S. The only thing breaking up the hallway were some stairs leading down to the slightly lower section close to Bradlees.

I do remember Bradlees used to have a security guard stationed at the mall enterance who would check receipts to make sure you paid for you items, as the opening was simply carved out of the corner of the store, and it would have been rather easy to walk out with a carriage full of merchandise.

There is also a Medi-Mart label scar on the side of the Big Lots, its much harder to see these days, but if conditions are good, you can still make it out. In the pictures posted of the Bradless one, the sign that used to be there was S&S (Dot) Bradlees (Dot) Medi-Mart. You call still make out the dots next to the Bradlees one in the picture here.

Yeah, I think you have to go through the interior. But I remember this mall and I remember my grandmother or my father taking my sister and I here. I remember the Beefsteak Charlies, Fayva, Showcase Cinemas and all the movies I saw there. It was a nice little mall, so sad to see the thing slowly die.

I remember the mall as well. I grew up in the area and remember going to bradlees with my Mom. It was an interior mall with bradlees on one end and Stop and Shop on the other. There was an interior entrance which I believe there was a Florist section you had to walk thourhg to ge into the store. Medi Mart was closest to Stop and Shop. There were other stores as well. On Friday nights my famly and I went to Papa Gino's which was in the interior of the mall along with a hobby shop next to it.

eco vacation costa rica said...
This comment has been removed by a blog administrator.
11:04 PM

I worked at the East Hartford Holiday Inn in the early 90's, and would shop at this Bradlee's location. Also enjoyed the pizza at Papa Gino's.
So sad about the Showcase Cinemas. The man who would become my husband, and I had our first date there. We went to see "The Distinguished Gentleman", with Eddie Murphy in it. So-so movie, but great date!

I worked at the Baskin-Robbins when I was in high school and the summer after graduation. We did a pretty brisk business, as did most of the stores at that time. There was not yet Buckland Mall, and Westfarms seemed kind of far, so this was a great place to do your 'one-stop shopping'. There was, at one time, a furniture store in there, as well as a gift shop and a small discount clothing store...can't remember the name. Bradlees seemed, at the time, a step up from Zayre and Ames as a discount retailer. All in all, it was pretty convenient and enjoyable to shop there, and grab lunch at Papa Gino's or a snack at Baskin-Robbins on your way out.

Growing up in Sunset Hills E. Htfd during the 70's And early 80's the Charter Oak Mall was our hang out. My friends and I would walk there every weekend to see a movie or just hang at the "mall". Thanks for posting. Nice memories....

Boy...i think my friend and I were the first customer of Bradlee's. I know we were the first at Papa Ginos. In the 70s, it was a good place to hang out, along with Woolworth, Lincoln Dairy and Friendly's. The Silver Lane Plaza (where Woolworth and JM Field's along with where the old Stop and Shop was) is dead. Friendly's is gone. But East Hartford is not the same.