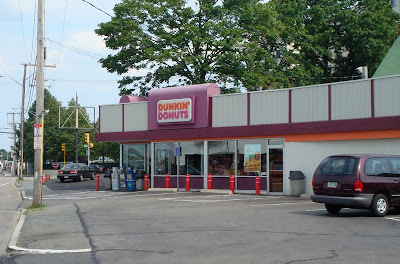 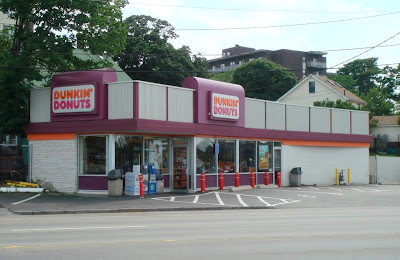 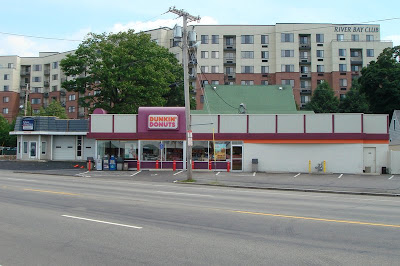 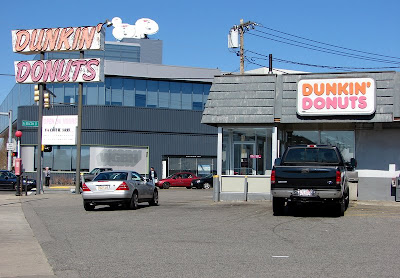 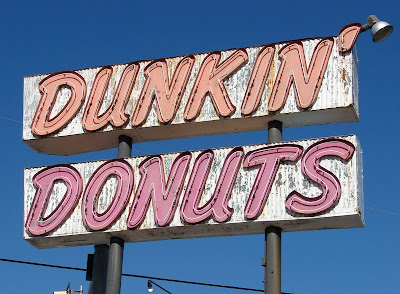 If you'd like to see what the Quincy store looked like in its heyday, find out here.
Posted by Nicholas M. DiMaio at 2:15 PM

Dunkin Donuts are super rare in Texas, much like Orange Julius nowadays. Texas would be a good market for DD. Maybe they could refurbish old Starbucks. And Starbucks doesn't sell donuts, either.

Dunkin' Donuts has always had its hardest time moving into the West ever since they began. Why? My guess is that there's too many independent, entrepreneural-types who don't necessarily need these chains -- especially when it's warm year long. After all, the West was built upon the spirit.

My other guess is that the HQ is largely based in the Northeast (and all over Mass.) so getting the goods all the way out there means setting up more distribution centers.

I could be wrong. Maybe it's, by large, just a Northeastern obsession.

By the way Jonah, I will make note of your Waco, TX Toys 'R' Us find soon.

Not that there AREN'T any in Texas, there are about three in Houston.

Meanwhile, a local donut shop is setting up shop across from my school. Maybe it's because Dunkin Donuts doesn't serve kolaches. Kolaches, especially sausage ones, are often found in donut shops in the Texas area.

I'm so charmed to see your story about Dunkin' Donuts. I noticed that store #9 was in the Princeton NJ area, as was store #41. The first DD I recall was in Middletown CT circa 1968. You could always find the cops there!

If you were looking for cops...which I wasn't!

A few days ago I heard on the radio that Dunkin Donuts was expanding in the rest and opening six locations in Arizona, of all places! I wonder when they'll be hitting Texas...recently Houston got a Steak n Shake...yum yum.

The vintage photo of Dunkin Donuts is actually in the "Time to Make the Donuts" book by William Rosenberg. It is identified as the Fair Lawn, NJ store. In fact you can tell it isn't the Quincy store as the Quincy store has a street that goes off at an sharp angle behind it and the Fair lawn store sits at a 90 degree corner.

What a revelation! I worked at Store Number One in 1965. It was my first job and I was only 14 at that time. I had no idea until today that it was the first Dunkin' Donuts store.

It's a shame that they didn't leave the first store in its original state. At the very least they could've left the neon sign.

Just as an FYI, Brighton is a neighborhood within the City of Boston, not a suburb.

I have a funny story to relate, regarding the first Dunkin' Donuts.

About 10 years ago , I sold a car to one of the bigwigs in their HQ in Randolph. It wasn't a very good car and the bigwig had a lot of problems with it. I volunteered to deliver a rental vehicle to the HQ and pick up the 'Lemon" that I had sold to have it repaired. When the needed repairs were complete , I returned the car to the HQ. I needed to speak to the 'bigwig' in order to get the keys for the rental vehicle. The receptionist at the HQ informed me that my customer was tied up in a meeting and that she would be out in 10 minutes.

The receptionist offered me a cup of coffee(DD , naturally) and a calendar .

While I was enjoying the coffee , I flipped thru the calender. The calendar was the type that is hinged like a steno pad , with pictures on the upper part and the months on the lower. The motif was of their stores.

When I opened the calendar to January it showed a picture of a DD store that was captioned "Our first store" . Only problem was , the picture wasn't of the first store.

I chuckled and mentioned the error to the receptionist. I told her that my first job was at the first DD and the picture was not of the right store.

The receptionist made a phone call and within 5 minutes there were a half dozen guys in suits in the lobby, yelling and pointing fingers at each other for the foul-up.

Turns out there was a picture of the original store in the calendar , somewhere around August/September and whoever was in charge of the captions had really screwed up ! I was told that they had printed up ~ 25,000 calenders !!

Dunkin' Donuts is an international donut and coffee, and they are the best ones, I used to go to the restaurand when I lived in USA and I was kid!I need a Dunkin' Donuts in Portugal as soon as possible please!!22dd

Thank you for another essential article. Where else could anyone get that kind of information in such a complete way of writing? I have a presentation incoming week, and I am on the lookout for such information.