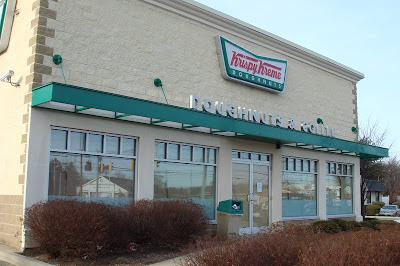 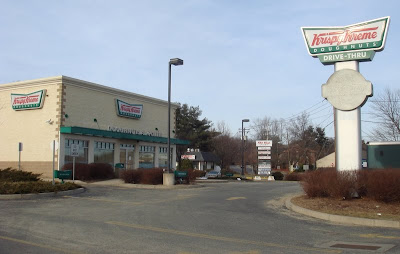 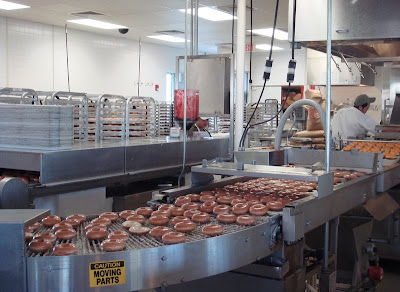 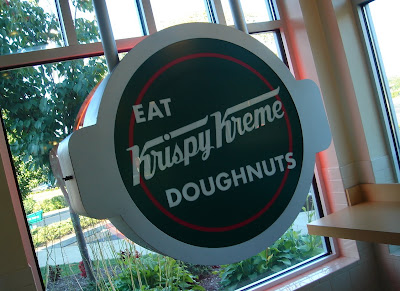 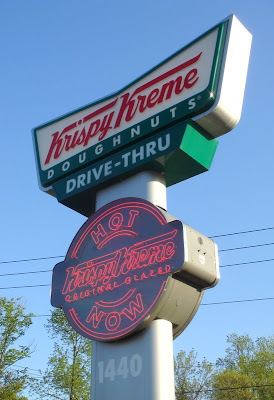 View more of our photos of Krispy Kreme and more on Flickr.
On an editorial note, I deeply apologize for the lack of maintenance and atrocious levels of spam that have collected on pages at The Caldor Rainbow over many months of our inactivity. I'm working to delete what I can since Blogger hasn't any simple, bulk deletion or effective captcha against such terrorists. Some pages' comments sections have been overrun and, in some instances, hijacked by surmountable levels of Japanese spammers.
Posted by Nicholas M. DiMaio at 6:20 PM

We have the opposite problem here. Krispy Kreme seems to be relatively stable, while Dunkin' Donuts tends to constantly open and close stores.

I miss krispy kreme I havent eaten their donuts since 2007

Bye bye Krispy Kreme. I enjoyed it while it lasted. I think the one in the casino will stay. It seems to have enough traffic, especially with all the gamblers using their meager club points to stop in and get a snack on their way home.

Good to see you back buddy. Sorry to hear that KK has shut its doors, so much better than Dunkin Donuts or Starbucks.
Hey, on a (somewhat) related note, did you happen to notice that 99 Restaurant (Newington, on Berlin Turnipike) has shuttered its doors? Happened around the first of February and signage is all gone....

I'm not sure if we have Krispy Kreme here anymore in the Philadelphia/South New Jersey area. They pulled out of their partnership with Acme after a couple of years (it didn't help that they only gave the stores one doughnut delivery a day, so whatever wasn't sold by noon spent the rest of the day going stale). And the big-deal free-standing store (the only one in the area) is probably on the least accessible area of the Roosevelt Boulevard. I haven't been past it in a long time, but I doubt it's still around. Like your empty KK here, they made a huge deal out of its opening on all the local news shows, but now it's pretty much forgotten.

Their stuff's good, but they just went expansion-happy in really dumb ways.

I remember the intense fanfare that the Newington one opened to.

Personally, if they are going to replace it with a Sonic, I would be thrilled. My parents defected from CT to South Carolina 2 years ago, so when I went to go visit them in 2008 I got to finally experience the wonder that is Sonic after having been taunted by their ads for the better part of my 19 years.

I stumbled across your blog today while googling the old Waterbury mall and I spent a good portion of time reading your posts, I particularly enjoyed the ones about the Danbury mall. To this day I am beyond annoyed that they took out the giant fountain from my youth and replaced it with that lame little thing. I think they could have reworked the big one to fit in with the remodel. I however, do not miss that terrible brown and green color scheme.

Do you remember the various Looney Tunes characters they used to have hanging around there? Do you know if those figurines were there up until the remodel or were they gone sometime before that?

Keep up the good work :)

I remember when the Milford Krispy Kreme opened, they sent 80 dozen donuts to our campus bar at Fairfield U for a concert we had. By the end of the concert 55 dozen ended up getting sent to a party, and that was after we were trying to give 3 dozen a person to anyone who had an interest at the bar! I have a picture somewhere of that hot mess...

Wow talk about a flash in the pan. When our Krispy Kreme opened they had to have police direct traffic for months and the line was long long long. Within two years they were closed for good.

When all else is lost the future still remains.

Babies R US Promotional Code said...
This comment has been removed by a blog administrator.
3:45 AM