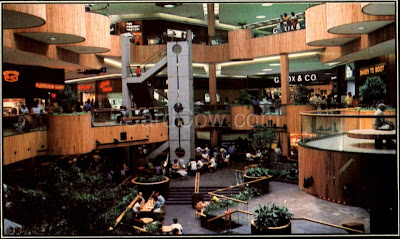 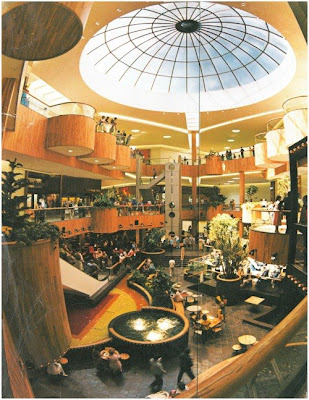 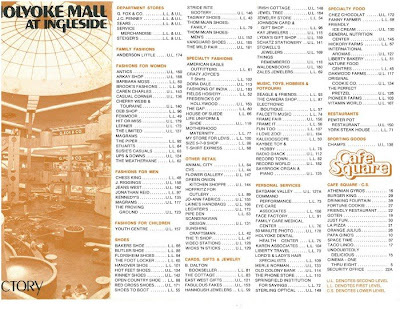 The first photo was provided by CardCow.com, the directory and photo provided by Holyoke Mall Facebook Page on behalf of the Pyramid Group.
Posted by Nicholas M. DiMaio at 7:57 PM

Your posts are great. Love this one, esp. the 70s wood work. The directory shot is fabulous!!!!!

I clearly spent WAY too much of my youth at the Holyoke Mall. I was 4 when the mall opened, and I remember that there were fountains everywhere in Cafe Square. That fish-eye shot doesn't do justice the amount of water. My parents would only eat at the Friendly's when we shopped, because otherwise all we wanted to do was to put our hands in the water--and there was water everywhere. I don't remember the fountains being around for very long and the postcard confirms that, by 1982, they were indeed no more.

If you notice, the big color shot seems to remove many of the signs. Perhaps this was to prevent the photo from becoming outdated if non-anchor retailers changed, and/or to prevent those retailers not depicted from crying foul. Or, G.Fox (G.Fox!) balked at paying money for extra promotion.

I wonder if part of the issue with Pyramid accessing its archives about the mall is due to construction problems. You might want to research the Republican archives about that. My memory is fuzzy, but I seem to remember a few issues popping up just after the mall opened. The too-steep staircase is (apparently) just the tip of the iceberg. One of my great uncles worked on the mall, and was very dubious about the building's quality, and in fact, never went inside after it was completed.

Great write up Nick. Love the photos and mall directory! Great to have you back.

While we are on the subject of malls....

Did anyone get in on this awesome project besides me? Should have the book by this winter.

Colleen's uncle was right, though it took a decade before a large section of the roof of the Sears collapsed. Wasn't the mall built on a landfill? Weren't there a lot of ground-settling problems? Cracks in the floors everywhere?

The Holyoke Mall was the first multi-level mall in the area, the first I'd ever been in. Eastfield, Springdale, Fairfield, Enfield Square ... they were all one floor. Okay, Baystate West was two levels, but I never really thought of it as a mall, though I explored it intensely throughout my childhood (anyone remember the mysterious "Court 4" staircase?)

They were also the first mall I remember to have a food court. Hampshire mall got one later when it was built, and Eastfield in the big renovation when they took the original theaters down.

Back at the start of the access road there was a Paysaver. I always wanted to stop there and gawk at the electronics (old-school stereos, even reel-to-reel tape decks) because the mall had nothing quite the same.

Holyoke Mall used to have a movie theater in the basement? what is in that place now? the Burlington coat factory? woah.

The summer of 82 or 83, I rode my bike to that mall every day I could manage it. Nestled in the cavern of Café Square was the nearest arcade, Just Fun, with all the biggest games of the day, and its tiny satellite arcade, Fun Too which housed a couple of rows of cast-offs, knock-offs and oddball games.

Those arced paneled outcroppings that looked over the court from the second and third story used to vibrate in a very unsettling way when more than a couple of people walked by.

At some point in '87 I video-taped in the Holyoke mall. Sadly, I haven't seen that tape in years, but if it ever turns up, I send it along!

I used to work in Cinnamonster back in 1996 in the Holyoke mall! I miss Toys R Us and KB Toys. Remember Nobody Beats The Wiz in the mall when they added on to it.