What Was Riverview Plaza? 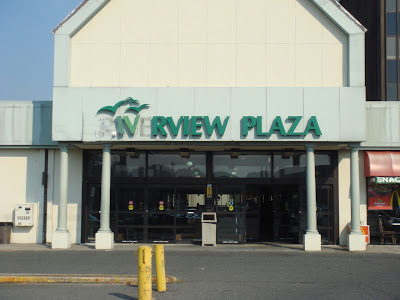 A friend of mine recently stumbled on an oddball site known as The Manchester Mall on Main St. in Manchester, CT. It's not a mall, really. Instead, it was a limited indoor retail space that may have been more in the 60's. Still, the hand-painted sign around the back signifies a mall, though only a whisper of one and in the oppressive shadows of a nearby blight and overwhelming site. When anyone says "mall" they think of this. Not this. The word association with the word mall classically refers to a gaggle of retailers within a cluster of space whereas today's people associate it with megatons of indoor, climate-controlled retail space which has consumed generations' since the indoorization craze beginning in the 1970s.

Riverview Plaza in Norwalk doesn't even call itself a mall but it sure as green grass on a Spring day look(ed) like one. A road sign doning seagulls could only forecast its fate that one day of the official mascot of the dead mall will paint it white. 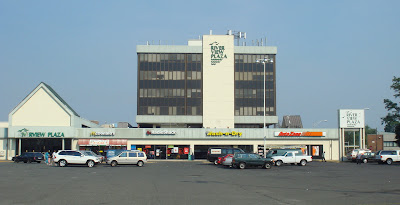 I've been sitting on these photos since 2007, around the time I wanted to do some investigating about this forgotten site, seemingly awaiting demolition. When I first stumbled on Riverview Plaza, I took a walk inside only to be greeted by three darkly-lit corridors of the T-shaped center where daylight once gleamed through now only to peak into void space, shadows within storefronts, grimy pits where plants once set and an occasional vagrant or legit clearanced patronage in the few lights it up here. Uninviting and creepy, no one wants to be here anymore aside the perception of unsavory activity and reports of "low lives" and as clear as the stank air, the days for this decrepit dump are (or were) numbered.

Most of the chain retailers Radio Shack and AutoZone were either basking in cheap leases or finishing them up and stayed outside the mall in the frontage strip part -- which had no part of the indoor portion. 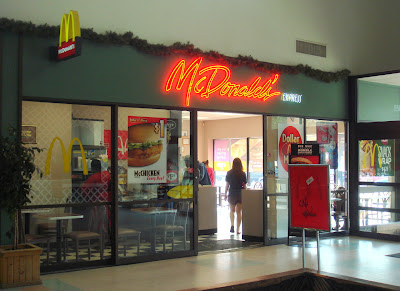 All that really kept this place alive was, among a few fronts living out the rests of their leases was a 90's-throwback McDonald's Express, complete with the scriptish logo I associate with short-lived personal pizzas 90's children discuss in circles when reflecting upon youth. 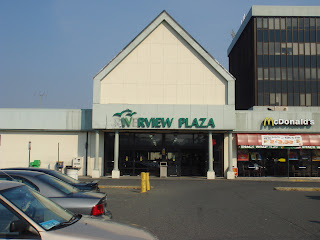 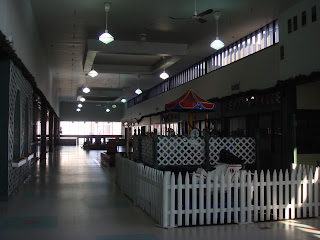 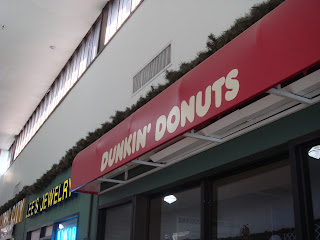 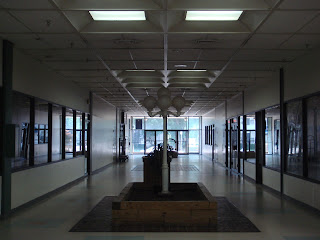 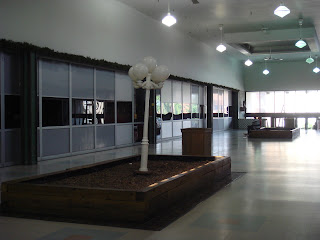 Though I can't seem to gather anything on this place, it was likely a smaller community mall so very common in many towns long departed, likely built in the late 60's or early 70's and actually served a great deal of business in a high-traffic area up until the swing of the century when the traditional indoor mall was in trouble. Plenty of design elements recall earlier times white-washed over, you have to appreciate this place was much more fanciful of a classic smaller indoor mall of that time. 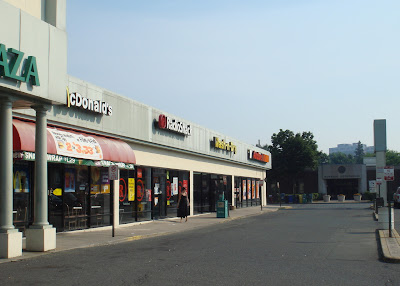 Today, Riverview Plaza is (mostly) gone. The renewal attempts to keep the riffraff away but not enough thanks to the nearby swells and smells of the damned and defeat at the nearby OTB -- I mean Winners off-track betting around the side. That office building behind it continues to hearken (in) back to its office/retail days with Riverview signage removed. Its developers have made an attempt turn this handsome space into a 'lifestyle' mixed use site with integrated living and retail space which actually completely block and occupy a greater part of the former parking lot.

Like putting a towel on a rotten milk spill, the plan to revitalize this area by developer Avalon may still be far off. Can't blame them really, the once blighted property passed many eyes on the US-1/7 area and that attempt to block it was errr -- successful. Seriously, go read the Google reviews on this place.

The McDonald's is seemingly still on the lease and on the signboard but we just couldn't find it. Recently, we went back to investigate to see if the indoor portion was still there only to find it had been mysteriously vanished. 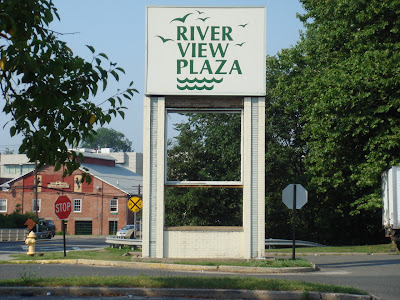 The wonderful, now dead Siteride once had an impressive collection of photos from the living years of this mall during the mid-90s (including a sweet shot of the cramped Dunkin' Donuts interior) that have since purged along with that site and until someone unearths those, these are all we have. You can actually still see a lot of what's now gone on Google Streetview.

Here's to the new Riverview, where I might just see a body floating down it.
Posted by Nicholas M. DiMaio at 11:17 AM

Oh, awesome! I never managed to get pictures of this mall and I saw recently that it's gone. I only visited once in 2003 and now that I live in California the likelihood of getting back there again are nil, not that there's anything left to see...

Riverview Plaza was formerly known as Norwalk Mall. This may help you find some information. Also it was anchored by a Pathmark Supermarket on the left side of the building.

I thought Avalon was going to demolish the entire building, but in fact they just built a massive condo development on the parking lot. The office building is still there. Radio Shack and AutoZone moved to a new property across the street on the site of a former gas station/car dealer.

I have always thought that some of the malls should be repurposed. And being a senior, who was priced out of her self-sustaining neighborhood in Brooklyn, and now has to drive to get minimum essentials, I think that to build different types of housing, subsidized, market rate co-ops, senior, etc., using the parking lots, with parking underneath. The malls could be repositioned with services, small retail, community facilities. I like the upscale supermarkets with prepared food. The glare makes it hard for me to see at night, and to have essential service close by would be a God sent.

I saw on Google Street view that it appears the mall portion had been demolished and replaced with apartments, which are connected to the office portion

I went there a lot in the 70s and 80s. As mentioned, the big thing there was Pathmark, I also remember there being and OTB place, a party store, a record store, and in later years a place for bartending classes.