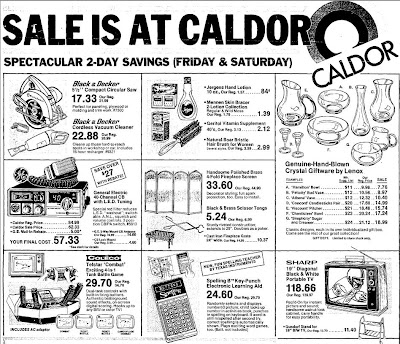 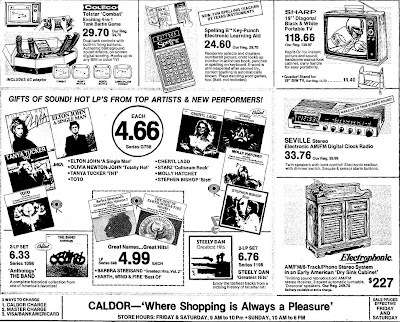 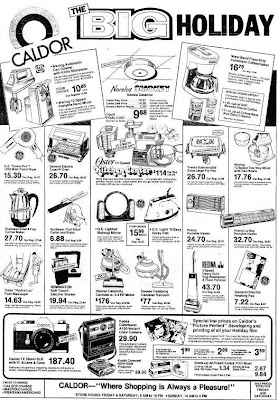 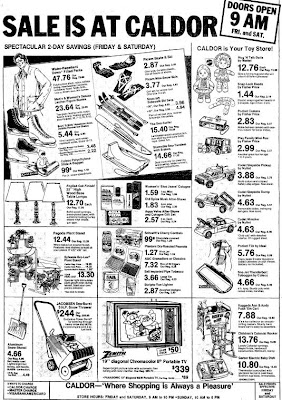 You know, I just saw a Staples circular tonite, showing all the neat sales that will end just as I'm waking up at 10AM. DAMMIT!!! I really wanted that pink and black office chair for $20!!!

Looks like fairly normal shopping for Black Friday and Saturday hours as well.
Nick do you have a pic of a Caldor charge card you could post? Maybe you have one in your collection.

Greg, I might have a newspaper copy of the card but I do not have a physical copy of an actual card. A few people emailed me claiming they wanted to share their retired card with me, but I've sadly never received follow-ups.

I think I have a Montgomery Ward charge card...and a Mervyn's one too!

It's great to look at the ad and interesting how much really hasn't changed in all these years. The home electrics are pretty much the same price nowadays, and some can be had for $10.00. Replace the LP's with DVD's and/or CD's for the same price. Thanks for the post as it put a smile on my face as I always hit Caldor's for the Dollar Day Sales. It was the best time to by all your home cleaning products.

9am store opening on Black Friday? How the heck do they expect to stay in business with those kind of hours?!?!? (/sarcasm)

I used to deliver the Courant,I must have thrown this ad on a few doorsteps in nov 1978

I saw a TV special telling the story of the Thankagiving/Christmas/Hannukah holiday block, and it said the term "Black Friday" as used for the day after Thanksgiving, was coined in 1965 by the Philadelphia Police Department. It didn't refer to retail craziness per se, but the fact the multitudes out shopping resulted in a rise in traffic accidents.

What an awesome disc, is the most incredible stuff I've ever seen in my whole life.

Intimately, the post is actually the best on this laudable topic. I harmonize with your conclusions and will eagerly look forward to your future updates.

OMG, I remember getting to the store at 7am to make sure the sales were set up. Any former Caldorites remember the yellow sale ticket that had to go on each and every item? And then come off every item at the end of the sale???