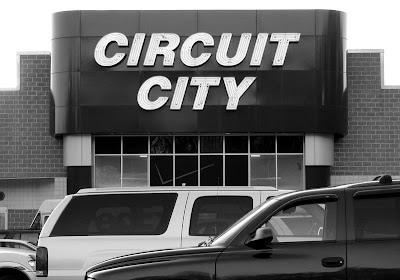 Circuit City just is a terrible place to shop. No cashiers just the customer service desk... meaning to purchase an item you have to wait on people returning items too. Then theres their poor selection of Cd's their selection is fewer than WalMart's & that goes for the DVD's for the most part. Why shop there when usually Best Buy is across the street?

I've been in my local Circuit City maybe a total of three times, and Best Buy not much more than that, as I buy most of my music/movies/video games at smaller chains such as Bull Moose Music and Newbury Comics. However, I will occasionally buy electronics-related items that I need in Best Buy, whereas the most recent purchase I recall making at CC was in 1998! I'm not at all surprised that they are having difficulties, but I AM a bit surprised that their store up here has managed to stay in business! Maybe it has more customers than meet the eye? Who knows!

WELCOME BACK NICK...thought you'd be back with Linen 'n Thimgs however

First of all, welcome back, Nick! Lots of us retail fans have missed you tons! That said, I think it's a shame Circuit City is in such terrible shape. I actually thought they were pretty cool, and I got quite a few things from them over the years. More specifically, I would get things I could use to upgrade my computer, such as sound cards. I know quite a few don't feel the same way I do, but screw it; I'll miss Circuit City.

The Circuit City up here near the "Shoppes at Buckland Hills" has always been the last stop for electronics. Even before Best Buy bought out the Media Play right next door, most people I knew went elsewhere to get movies, cds and electronics. The store here has angry employees, employees who do not care, a sparse layout, a poor selection and prices that are usually double any other stores.
I think that Circuit City is the victim of an overcrowded market, and they failed to progress along in a timely fashion.

As for Circuit City I will sure miss it if it does go under,it certainly won't be the same. But more so it would be a big blow for the Torrington Fair shopping plaza, because they recently got a brand new Circuit City in place of the Sears Hardware that just closed down. If Circuit City goes out of business then that spots empty again for a couple of years. It would certainly not be good.

You never answered my email about the site layout or the Toys R Us. Great post, though, but I think Mervyn's is the biggest loss so far. Oh wait...that's in the West Coast.

I worked at the Circuit City pictured in your article for over 3 years. This was when the company was still settling into the state, and things were still running well. What people forget is that the firings in 2007 was the *second* time the company did it.

The first time was when they moved away from a commission format to an hourly format in 2003; those reps who were earning too much (in other words, the ones who were selling the most) were considered too expensive to keep. Not as much damage was done by that round of firings, because only about 10% of the old reps were let go, and many of the remaining ones took the hourly offerings, even though they were a percentage less than their average commission results. That was when I started having trouble supporting the stores anymore - good friends of mine who were still there lost their jobs.

The shift from commission to hourly reduced the loyalty of the employees, and over time I saw an erosion in quality. Some good people remained, but largely they were replaced by people there for the paycheck and the discount.

Except for the new store they opened in Milford, I've never been all that impressed anymore when I walk inside. Best Buy has aggressively kept modifying their stores, while the gray/maroon colors of Circuit City just seem drab and the store is just not as inviting. The selection, especially on computers, has been wanting for awhile.

Circuit City is done with! Finished! Kaput! Another wing has been added in the huge mall in the sky...anchored by Mervyn's, with Steve and Barry's, Circuit City, and Linens N Things as junior anchors.

Very happy to see your article, I very much to like and agree with your point of view. Thank you for sharing. At the same time,i love best pram very much .Welcome to look at my website and blog articles.Hope we can become good friends, and exchange and to help each other! Thanks!!

Sometimes in my vacation I live to travel around the world and take some wonderful photos to the wonders of the planet !