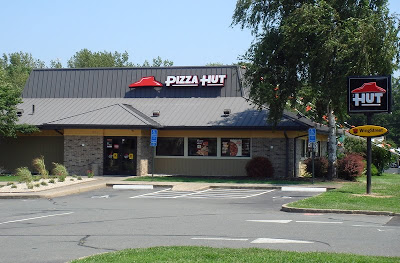 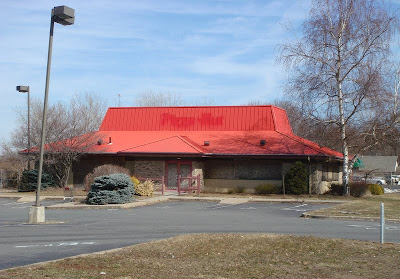 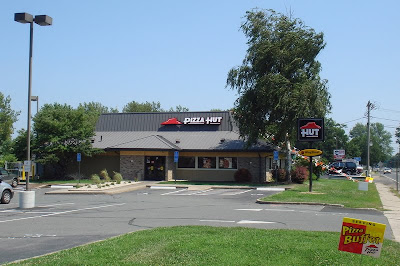 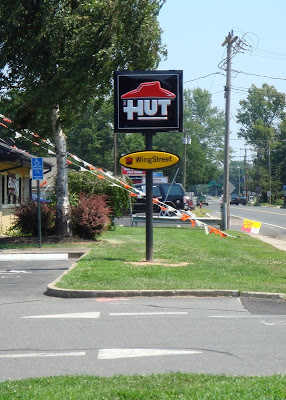 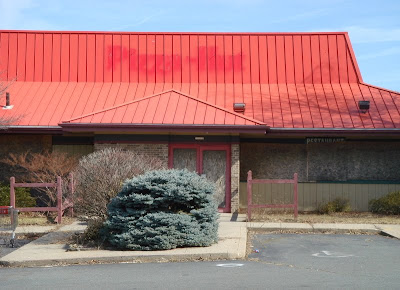 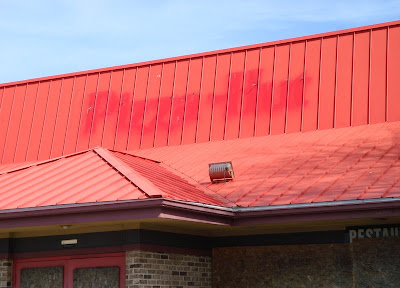 I don't know, but The Hut is better than "DQ". Was there any fire damage on the original roof?

No visible roof damage from the exterior as the before pictures show from the outside. I think all that was done was a repaint.

Anyone else find it odd that they are proud of their red roof trademark, and even use it as their logo (on both the roof sign and the street banner sign) yet, here was an authentic red-boston roof, the "iconic-perfect" image, and they painted it grey, and put a "red roof" logo image on the now-grey real red roof.

We had one last red-roof Pizza Hut sitting out rotting on Route 130 in South Jersey; I think they were waiting for the shrubs to get as tall as the roof before they tore it down. This one's fire damage is way more interesting than overgrown pine-looking things.

The "Hut" rebranding is almost as pathetic as Radio Shack trying to hip-ify itself as "The Shack". It doesn't even sound like it should offer pizza - the "Hut" sounds like a surf shop, just like the "Shack" sounds like a sandwich shop. I give both a year, tops.

Wow, surprising news, I hope it does well in the coming years.

I sort of like the new look, but yeah I agree "The Hut" as a name has to go.

Its been two years give or take since the post, is the place still open?? it has been a lot of time since I went to that area.
77sv

I think every person should glance at this.

wow i like this interesting blog so cool thanks for posting and i will share this to my friends..keep it up

I think its a pretty good idea not that there aren't other sites out there that already do something similar but I think it might catch on here pretty well.

The red roof of the Pizza Hut is, indeed, iconic and very noticeable from afar. You can't miss it, and when you see it, you'll always go, "Oh, there's Pizza Hut!" It's just like how the White House was before it got burned. It was gray before; now, it's white.